Ten years after the earthquake-tsunami disaster and subsequent nuclear accident, roads and other public infrastructure in devastated areas of northeastern Japan have been restored, houses rebuilt and new commercial centers created. Reconstruction appears to be on track.

But some local residents and others who have witnessed the changes to Fukushima Prefecture, one of the hardest-hit areas, worry about the future and especially what will become of the Fukushima Daiichi nuclear power plant and its surroundings. 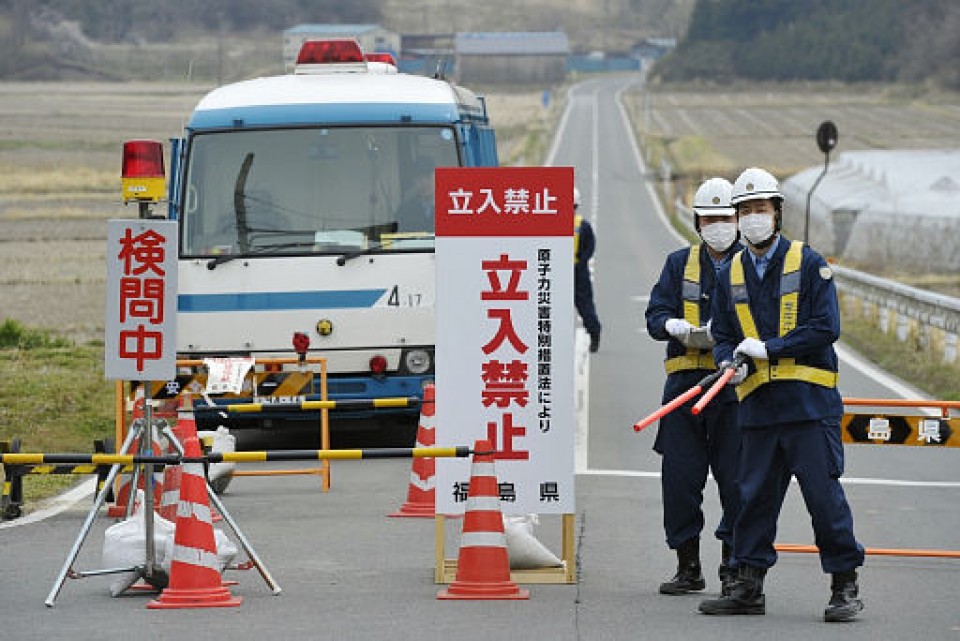 Police officers man a checkpoint in Minamisoma, Fukushima Prefecture, about 20 kilometers from the crippled Fukushima Daiichi nuclear power plant on April 11, 2011, a month after the catastrophic earthquake and tsunami disaster. The Japanese government on the same day expanded its evacuation order to include some areas with high amounts of cumulative radioactive materials beyond the evacuation zone of a 20-kilometer radius from the plant. (Kyodo)

Tokyo-based author Ichie Watanabe has watched the transformation of Fukushima since 2011. Having visited there almost every month since the catastrophe, she believes the reality on the ground does not match the view held by those across the rest of Japan.

"I strongly feel it," Watanabe said in an interview with Kyodo News, when asked if she feels any gap in perception between local residents and those living outside the disaster-hit areas.

While the Fukushima crisis and its aftermath, the worst nuclear accident since the 1986 Chernobyl disaster, shocked Japan and the world, that initial reaction has inevitably faded.

But over the years, with the situation at the plant far from the dark early days when explosions rang out and panic pervaded, the crisis appears to have fallen off the radar as other issues have taken the spotlight.

"While I don't think people (outside the affected areas) have forgotten about the nuclear accident, their attention has now been taken by various issues including the coronavirus outbreak," Watanabe said.

The 76-year-old Watanabe was involved early on with the post-disaster efforts to help Fukushima rebuild. She still recalls when she, along with her author husband Makoto Shiina, saw on television the explosion of the plant's No. 1 reactor on March 12, 2011.

It was a day after a massive earthquake and tsunami occurred, with the tsunami striking the nuclear complex operated by Tokyo Electric Power Company Holdings Inc., and triggering meltdowns in three of its reactors.

Driven by a need to know what was actually happening on the ground near the crippled plant, she visited Minamisoma, parts of which were within the government-set 20-kilometer no-go radius around the plant, in August that year to volunteer to help those who remained. 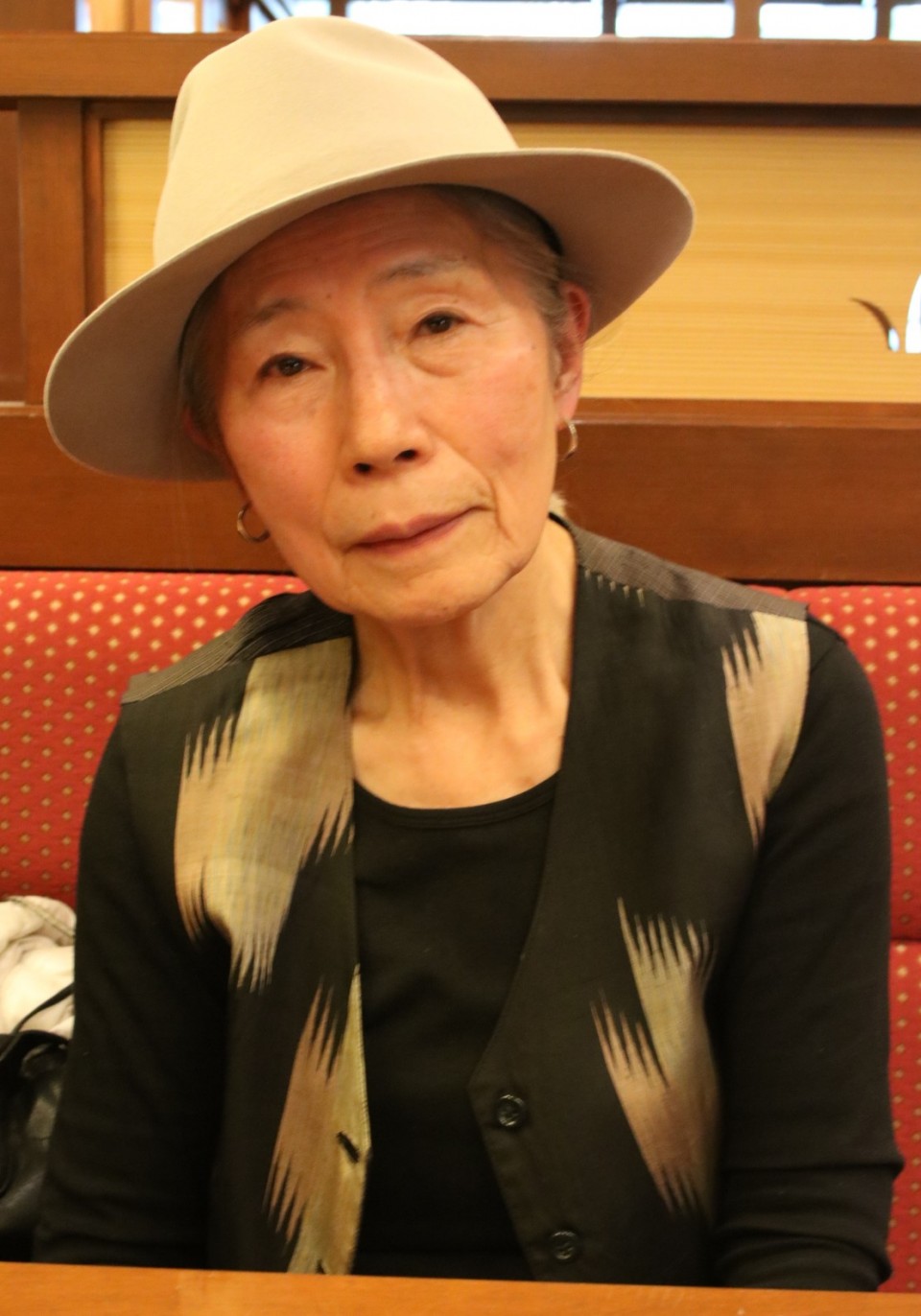 Ichie Watanabe, a 76-year-old author who has regularly visited Minamisoma, Fukushima Prefecture, hit hard by the 2011 earthquake and tsunami, speaks during an interview with Kyodo News on Feb. 5, 2021, in Tokyo. (Kyodo)

She has since widened her activities to areas such as Iitate and Namie that are closer to the crippled plant.

Ten years on, she continues her efforts to convey to those outside Fukushima what local residents feel, want and need.

"For many people outside the disaster-hit areas, it is difficult to visit those places in person, so I've been continuing my activity to at least bridge the distance between Fukushima and those people," she said.

The writer has recorded what local residents have to say and has ensured the stories made it to print in magazines and books. She has held more than 30 events in Tokyo to give them a platform to explain their situation.

Concerned that Japanese people have already forgotten what it was like to experience power cuts -- one way the whole nation felt the impact of the disaster -- Watanabe believes residents need to rethink their power usage and reduce unnecessary waste.

The nuclear accident ignited worries about a stable supply of power, and also created momentum for civic efforts toward a nuclear-free Japan, a country that still relies on nuclear power to meet a significant part of its energy needs.

But this push for less reliance on nuclear power has triggered a trade-off, Watanabe argues, pointing to the impact the rollout of renewable energy has had on the Fukushima scenery.

Many paddy fields and other pristine areas have been turned into mega solar power generation facilities and are now covered with black panels which she believes have changed the environment for good.

"Black panels are tightly placed as if those lands should not be idle and must be utilized to create something," she said, adding several mountains have been mined for earth and sand used in reconstruction works and for other purposes.

"Is it all right to destroy mountains and forests for the sake of renewable energy, just so (we won't have to) rely on nuclear power?" Watanabe asks, a question with wider significance as Japan looks to move away from the climate change-causing fossil fuels that have made up much of the country's post-Fukushima energy shortfall.

The author said she feels the changes seemed to have undermined the region's history. "The map has been redrawn for a decade under the banner of 'reconstruction' policy," she said.

Watanabe stressed that reconstruction should not only be determined by the completion of infrastructure projects, saying, "We can say reconstruction is finally achieved when residents can now live in peace and safety."

The government has sought to promote the return of those who left their hometowns around the Fukushima plant, with public support for rent-free housing in Tokyo and elsewhere ending in 2017. But around 36,000 people are still voluntarily living away from their former residences after evacuating amid the catastrophe, according to official data.

The government is also trying to return evacuees to their homes by means such as raising the nuclear exposure minimum to a 20-millisievert threshold, Watanabe said.

Roads leading to a museum that opened in Futaba last year to archive and exhibit items related to the nuclear disaster have been rebuilt and maintained for easier access. A large-scale park to commemorate the disaster and pray for the reconstruction of Fukushima is also being built near the museum. 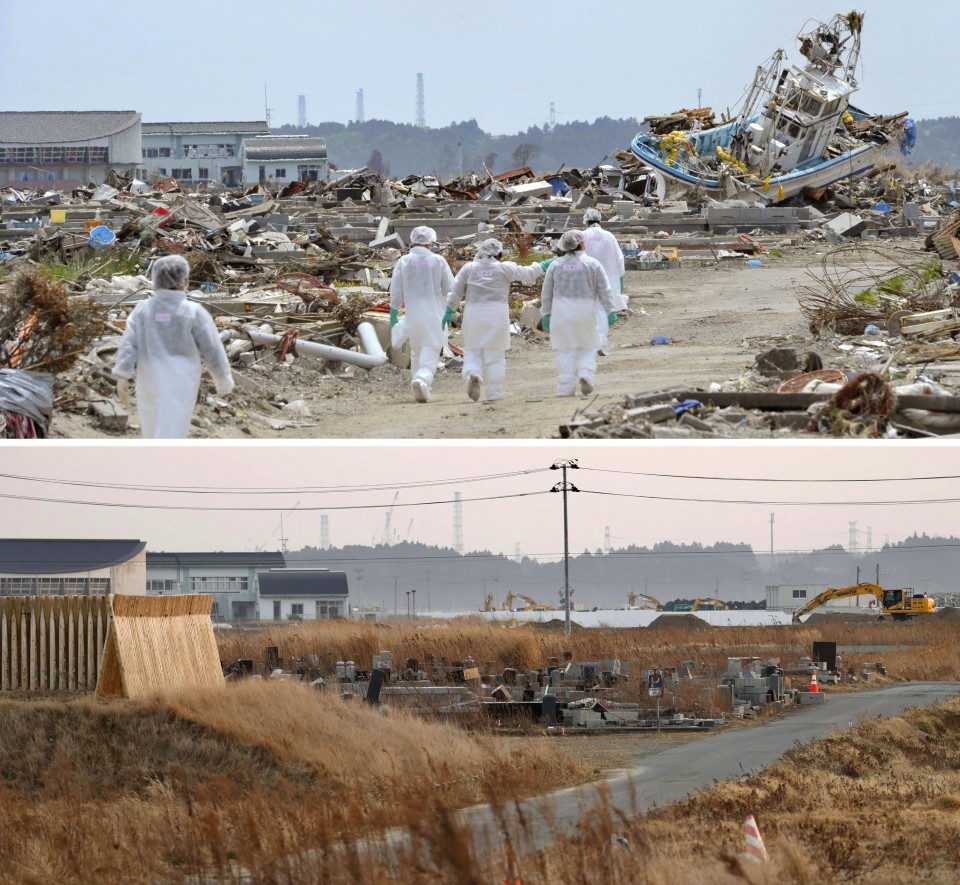 Combined photo shows wreckage in Namie (top), a northeastern Japan town near the crippled Fukushima Daiichi nuclear power plant (seen in the back), pictured on May 26, 2011, and the same area pictured on Feb. 22, 2021, still deserted with grass and gravestones unattended ahead of the 10th anniversary of the Great East Japan Earthquake. (Kyodo) ==Kyodo

When such initiatives are feted by the media, Watanabe warns people outside the disaster-hit region, which also includes the nearby prefectures of Iwate and Miyagi, get the wrong impression that reconstruction is progressing well.

The reality, as she and others would point out, is different for some residential areas in Futaba and Okuma, where the crippled nuclear plant is located. In these areas, damaged houses and buildings are a grim reminder of the disaster.

The Olympics and Paralympics in Tokyo, the hosting of which the government touted as a way to show the world the progress made in post-disaster reconstruction, may have proven to do just the opposite, according to one academic.

Yusuke Yamashita, a sociology professor at Tokyo Metropolitan University, says Japan's winning bid in 2013 to host the games has actually hampered the process.

Former Prime Minister Shinzo Abe stressed the meltdown-stricken plant was "under control" in a speech during the bidding, and the government has since tried to downplay areas of concern to the international community. One such still-unresolved issue is that of contaminated water stored at the power plant site after being used to cool the reactor.

It also remains uncertain if decommissioning of the Fukushima plant can be completed on schedule between 2041 and 2051.

Yamashita points out that both the reconstruction process and the Olympics have become the government's long-term investment targets to keep the economy afloat -- and something distant for the broader public.

"For ordinary citizens, both reconstruction and the Olympics have turned into something that seems to be happening somewhere far away," he said, highlighting the sense of indifference many feel outside of Fukushima and other disaster-hit prefectures.