The following are questions and answers on the 2011 Fukushima nuclear disaster and developments thereafter.

A: At 2:46 p.m., a magnitude-9.0 earthquake struck off northeastern Japan, triggering tsunami waves as high as around 15 meters which hit areas on the Pacific coast. 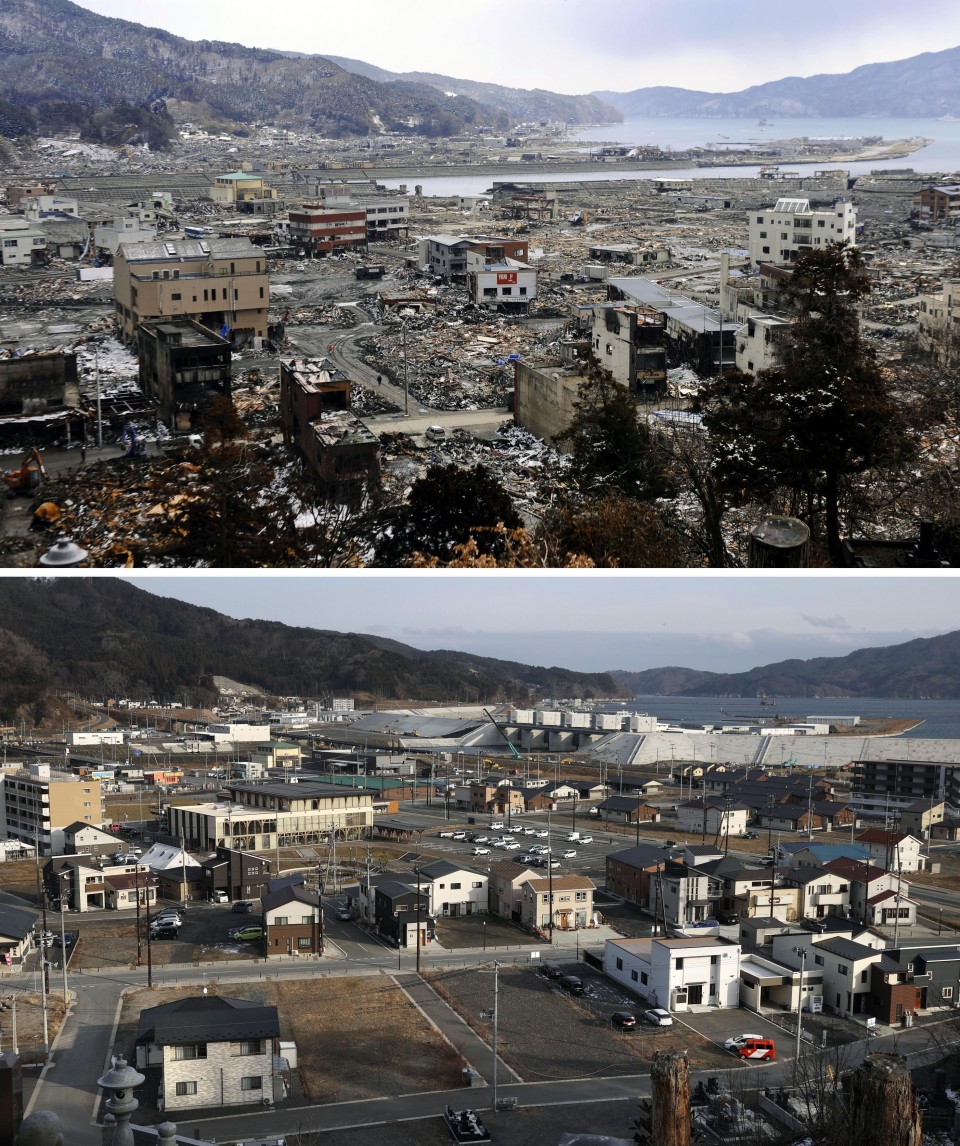 Combined photo shows a tsunami-hit area (top) in Otsuchi, Iwate Prefecture, on March 27, 2011, about two weeks after the earthquake-triggered disaster in northeastern Japan, and the same area (bottom) pictured on Feb. 1, 2021. (Kyodo)

Q: How did it affect the Fukushima Daiichi nuclear power plant?

A: The tsunami following the massive quake engulfed the six-reactor Fukushima Daiichi nuclear power plant operated by what is now Tokyo Electric Power Company Holdings Inc. in the Pacific coast towns of Futaba and Okuma.

The Nos. 1-3 reactors had automatically shut down due to the strong shaking and were initially cooled by backup generators. But flooding from the tsunami cut off the power supply for the Nos. 1-5 units, causing the cooling systems to fail. The Nos. 4-6 units were already offline for maintenance at the time.

Q: What was the situation at the Fukushima Daiichi nuclear power plant in the immediate wake of the disaster?

A: The Nos. 1-3 reactors subsequently suffered core meltdowns, while hydrogen explosions damaged the buildings housing the Nos. 1, 3 and 4 units. Around 160,000 people were evacuated at one point. On March 20, the Nos. 5-6 reactors achieved cold shutdown. 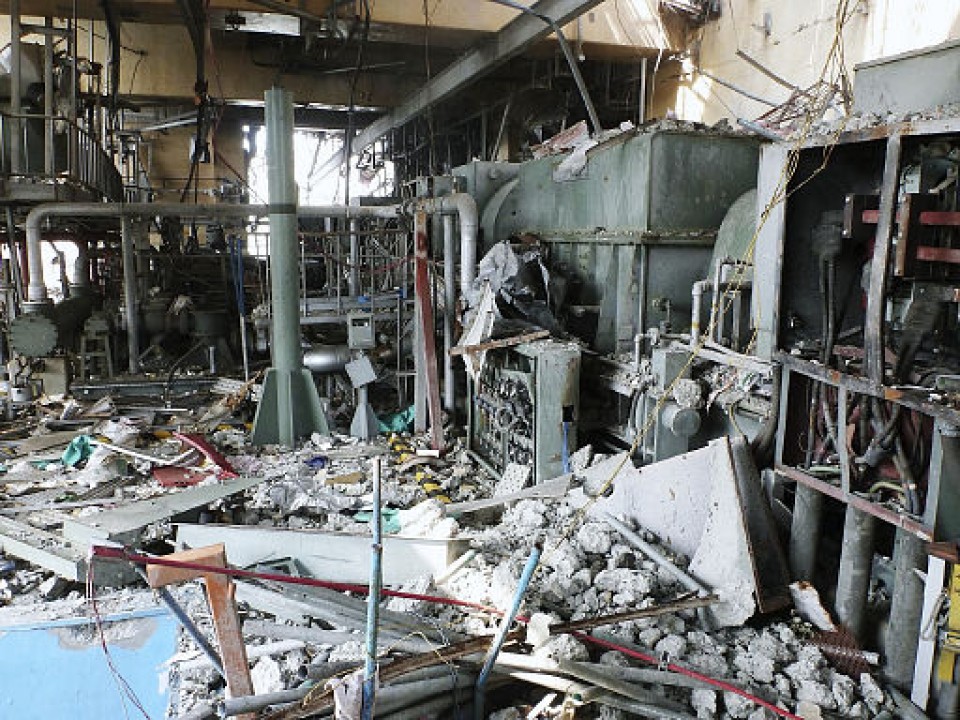 Supplied photo shows the fourth floor of the building housing the No. 4 reactor of the crippled Fukushima Daiichi nuclear power plant in Fukushima Prefecture on June 10, 2011. The building was hit by an explosion, potentially caused by hydrogen. (Photo courtesy of Tokyo Electric Power Co.)(Kyodo)

Q: How did the government respond in the wake of the disaster?

In December 2011, the government and TEPCO announced plans to scrap the plant's Nos. 1-4 reactors within 30 to 40 years. The utility decided in 2013 to permanently shut down the Nos. 5-6 units as well. 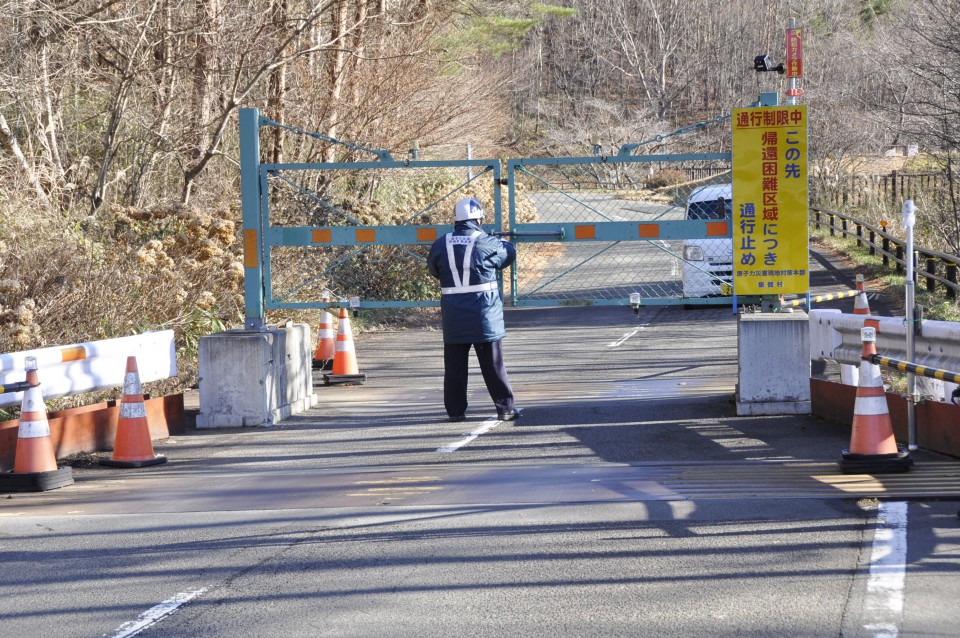 Photo taken on Dec. 6, 2020, in Iitate, a northeastern Japan village near the crippled Fukushima Daiichi nuclear power plant, shows a fence set up on a road to bar entry to an off-limit area ahead of the 10th anniversary of the earthquake-tsunami disaster and the subsequent nuclear crisis. (Kyodo)

A: Japan shut down all its commercial nuclear reactors by May 2011 and launched the Nuclear Regulation Authority, a new nuclear regulatory body, in September 2012 to oversee stricter operating rules.

The new safety standards introduced in 2013, which are mandatory for restarting reactors, oblige plant operators to build facilities that can withstand natural disasters as well as terrorist attacks, such as planes being flown into them, without succumbing to major damage such as leakage of radioactive materials.

Due to huge costs to implement government-mandated new safety measures, some power companies have decided to decommission their plants.

As of Feb. 8, 2021, nine reactors have been restarted under the stricter safety standards. Four of them are currently in operation.

Another 18 are in various stages of the approval process. A total of 24 reactors are slated to be decommissioned, including the six at the Fukushima Daiichi plant, while nine have not applied for restarting.

Under the country's latest energy strategy toward fiscal 2030, which was compiled in 2018, Japan aims to have renewables account for 22 to 24 percent, fossil fuels 56 percent, and nuclear power 20 to 22 percent in the country's electricity generation.

Q: How does the Fukushima nuclear crisis compare with Chernobyl?

A: The Fukushima plant meltdown is ranked the highest 7 on an international scale of nuclear crisis severity level, on par with the 1986 Chernobyl disaster. They are the only two accidents to be classified on that level to date.

Q: What is the current evacuation situation around the Fukushima reactors?

A: With radiation levels decreasing due to natural attenuation as well as the stripping of surface soil and decontamination of buildings, evacuation orders have been gradually lifted in areas surrounding the crisis-hit plant. The no-go zone now occupies approximately 337 square kilometers, or 30 percent of what it was at its maximum but is still equivalent to more than half the area covered by central Tokyo's 23 wards.

Areas in seven municipalities, including Futaba and Okuma, remain designated as no-go zones due to high radiation levels. There are no estimates as to when the entry ban to those areas will be removed. Japan lifted its evacuation order in some parts of Futaba in March 2020, but nobody is able to live there. 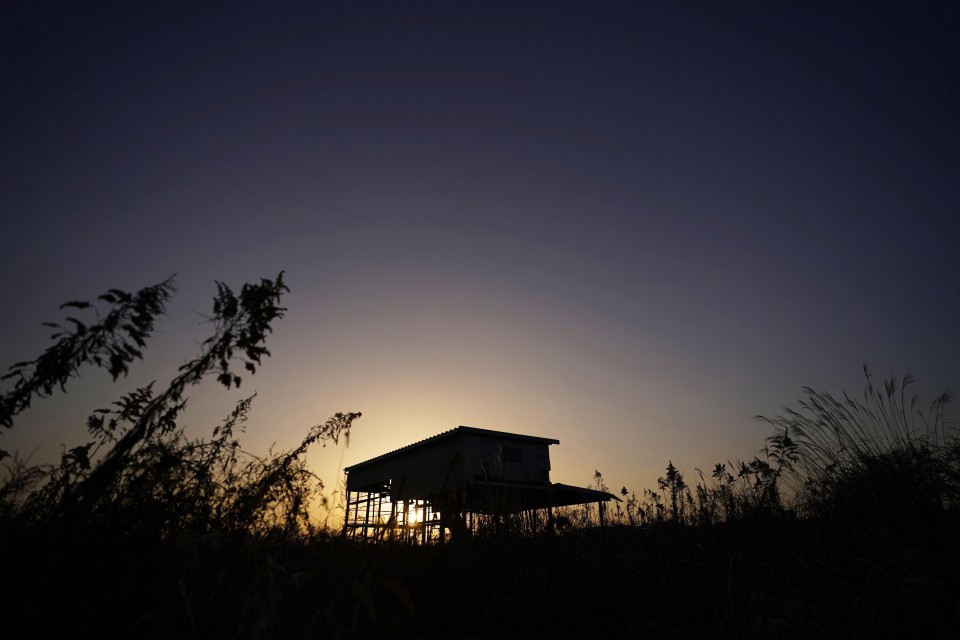 Q: What is the status of the decommissioning of the Fukushima reactors?

A: TEPCO says the process of decommissioning the crippled facility could last until 2051, though there are doubts over whether it can stick to that time frame in the face of numerous technical challenges.

The removal of all fuel rods from the spent fuel pool of the No. 4 unit was completed in December 2014. Rod removal was also completed for the No. 3 unit Sunday. In December 2019, the government decided to delay the start of removal of spent fuel from the plant's Nos. 1-2 reactor pools by up to five years from the initially scheduled fiscal 2023 to take further safety precautions.

It has also yet to decide how to dispose of some 1.24 million tons of water contaminated with low-toxicity radioactive tritium being kept in tanks on the premises, even though space is expected to run out by the fall of 2022 at the earliest. The plant has been generating massive amounts of radiation-tainted water since the accident as it needs water to cool the reactors.

The Japanese government is considering the option of releasing the water, which has been treated using an advanced liquid processing system to remove most contaminants other than the relatively less toxic tritium, into the sea. But it has yet to make a final decision amid strong opposition by the local fishery industry due to concerns about the reputation of marine products. 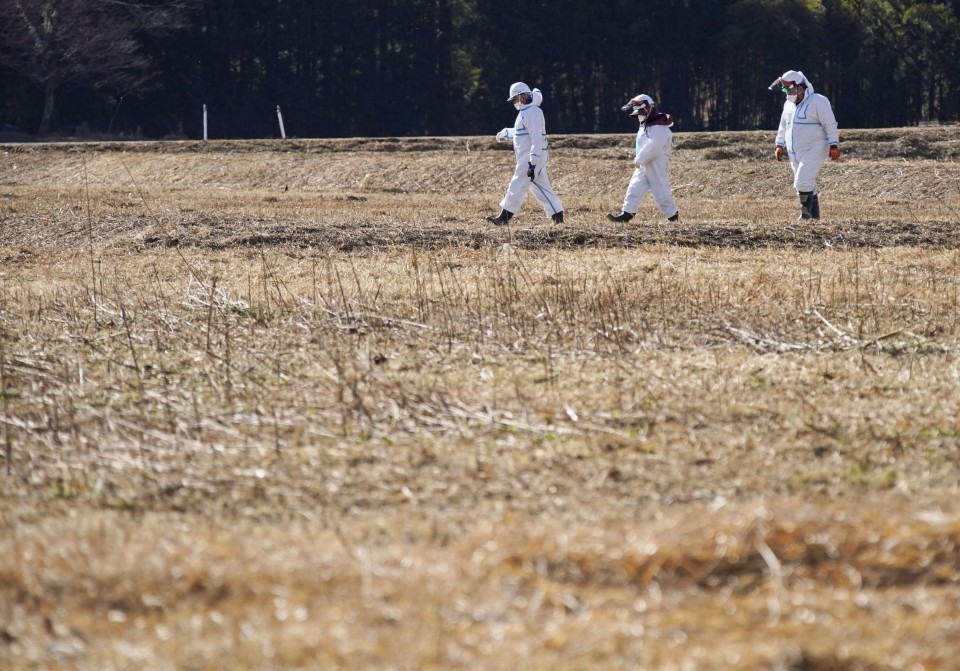 Photo taken in the Fukushima Prefecture town of Okuma, northeastern Japan, on Jan. 29, 2021, shows workers wearing protective suits walking in an area that remains off limits about 10 years after the March 2011 earthquake-triggered disaster at the Fukushima Daiichi nuclear power plant. (Kyodo)

Q: Did the government or TEPCO take responsibility for what happened?

A: Around 30 damages suits seeking compensation from the state and TEPCO over the disaster have been filed across Japan by more than 10,000 people who were forced to evacuate following government orders or voluntarily fled.

While some courts have acknowledged that both the government and the utility were negligent in preparing for a tsunami like the one that struck the facility, others have ordered only TEPCO to pay damages.

In the only criminal trial to arise out of the disaster, three former executives of TEPCO were indicted in 2016 for failing to implement tsunami countermeasures leading to the deaths of 44 people. But they were acquitted by the Tokyo District Court in September 2019.

The government has denied responsibility for the disaster, saying it could not have foreseen the flooding of the nuclear plant due to a tsunami.