Japan is likely to see increased supply of coronavirus vaccines in April when the government starts administering shots to the elderly, Taro Kono, minister in charge of vaccinations, said Sunday.

"I believe we can add a bit to a planned shipment for April," Kono said on a Fuji Television Network program, saying the government is in negotiations on the matter with Pfizer Inc. of the United States. 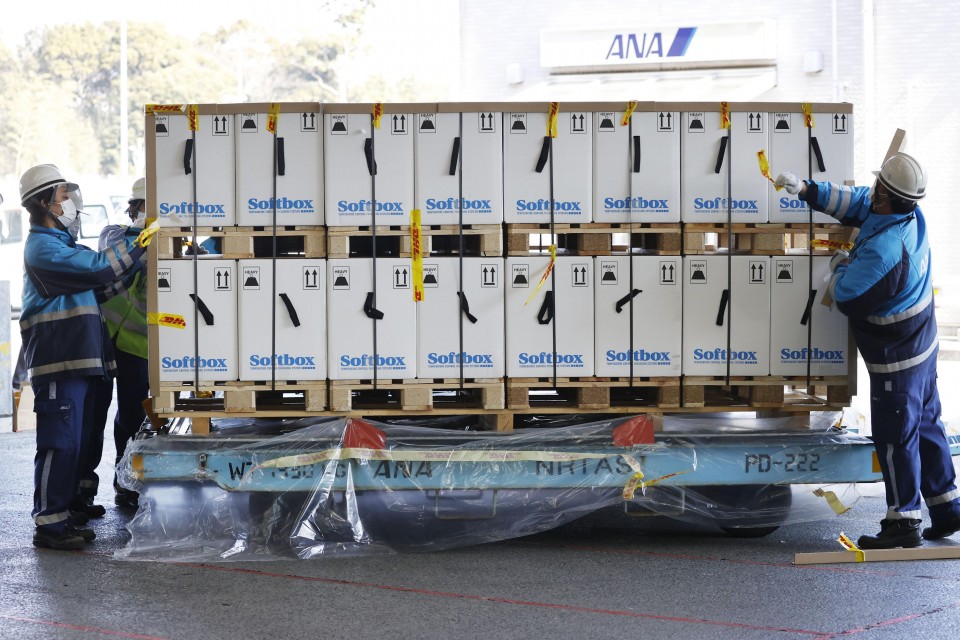 The second shipment of Pfizer Inc.'s COVID-19 vaccine is pictured after being unloaded from an All Nippon Airways plane at Narita airport near Tokyo on Feb. 21, 2021. The shipment of up to around 450,000 doses from Pfizer's factory in Belgium is earmarked for an initial group of health workers in the first phase of Japan's vaccination program that began on Feb. 17. (Kyodo) ==Kyodo

Kono also said he expects the government to have enough COVID-19 vaccine supply so the elderly can receive their second shots in May and June.

The government plans to start administering shots to people aged 65 or older, a group of about 36 million people, on April 12.

Vaccinations will start on a small scale to work out any distribution and technical issues before ramping up nationwide from April 26.

"In the last week of April, we will deliver at least one box to all prefectures," Kono said, in reference to a maximum 1,170 doses of vaccines.

"Going ahead, we will ship in accordance with the volume of vaccinations," he said.

On Feb. 17, Japan started inoculating an initial group of 40,000 health workers in the first phase of its vaccination program.

People with preexisting conditions such as diabetes and those working at elderly care facilities will come next, and then finally the general population.