Attempts to defraud people of money over COVID-19 vaccinations have been recently reported in Japan, with scammers taking advantage of the public's fear of contracting the novel coronavirus and offering costly "priority reservations" even though jabs are free by law in the country.

Police said they are alarmed by the fraud attempts through phone calls and emails and they are worried that the schemes might become more sophisticated and harder to detect as the vaccine rollout expands beyond health workers in Japan. 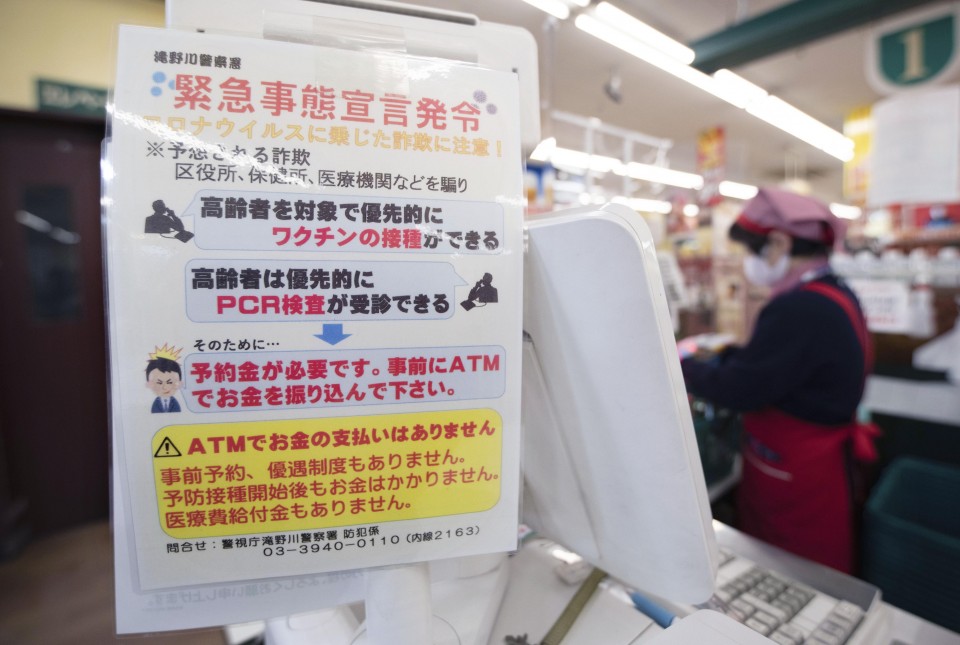 A poster in a Tokyo supermarket warns about fraud related to the coronavirus and vaccination against COVID-19 targeting the elderly on Feb. 10, 2021. (Kyodo)

Japan started its inoculation effort in mid-February for an initial group of front-line medical workers and plans to gradually expand it to other prioritized groups until reaching the general public. The country will begin vaccinations for those aged 65 or older on April 12.

In Tokyo, the police have confirmed 13 fraudulent phone calls since January offering receivers the chance to skip the vaccination queue in exchange for a bank deposit of 100,000 yen ($940).

The callers pretended to be public health center employees or gave other fake identities, and most of their targets were in their 80s. None fell victim, perceiving the calls to be suspicious.

To warn the public about vaccine-related scams, Tokyo police have been putting up posters in public areas such as supermarkets. "If you receive a strange phone call seeking reservation fees (to be vaccinated), please hang up immediately and come to us for advice," said a Metropolitan Police Department official.

The National Consumer Affairs Center of Japan has confirmed around 20 vaccine-related scams involving the use of phone calls as well as emails and mobile phone texts.

A woman in her 20s also fell victim to a vaccine-related investment fraud through social media posts.

Last October, the woman, who is from the Kyushu region in southwestern Japan, deposited 1.2 million yen to a bank account following instructions by a poster who promoted an investment scheme on vaccine development. Once the money was paid, however, she was ghosted, according to the Consumer Affairs Agency.

British police said in January that they were receiving on average more than 1,000 complaints a day about suspicious emails related to vaccines under the pretense of being sent by the country's National Health Service.

British local media also reported a case in December of a man who pretended to be a medical professional and administered a fake vaccine to a 92-year-old woman with a dart-like implement before taking payment.

In China, police caught a criminal ring in February that concocted a fake vaccine from a normal saline solution then sold it illicitly at an exorbitant price, state-run Xinhua News Agency reported. Over 3,000 doses were seized but the BBC has reported that a batch of vaccines were smuggled abroad.