Prefectural governors urged Prime Minister Yoshihide Suga's government on Saturday to present a comprehensive coronavirus vaccination rollout plan as soon as it can.

In a set of proposals soon to be submitted to the government, the National Governors' Association requested targets be set for the public vaccine rollout and that details be provided about a system being created to track the progress of inoculations. 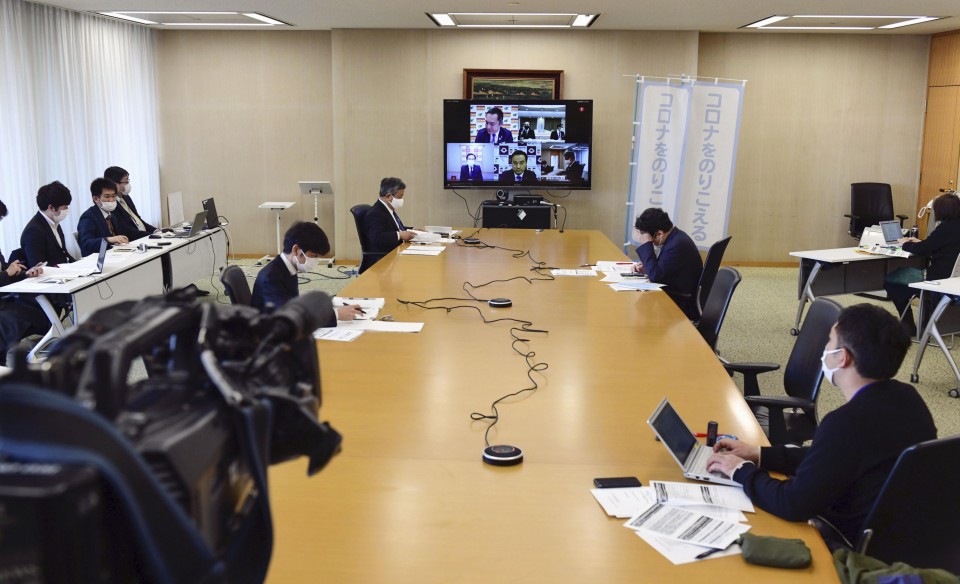 Governors from Japan's 47 prefectures take part in an online meeting on Feb. 27, 2021. The National Governors' Association wants Prime Minister Yoshihide Suga's government to present a comprehensive coronavirus vaccination rollout plan as soon as it can. (Kyodo)

About 40 of Japan's 47 prefectural governors attended an online meeting Saturday and reached a broad consensus on the proposals, with vaccinations for medical professionals having begun earlier in February.

According to the proposal, the governors asked the government to swiftly deliver on its plan, including making available a timeline of when people in Japan can expect to get their shots.

They also requested that the central government shoulder the majority of the cost associated with the nationwide vaccination drive.

"The volume of vaccine supply and estimates of future supply the government has shown represent only a small part of required levels," Fukushima Gov. Masao Uchibori said. "I would like the government to present a long-term plan soon."

The meeting came a day after Suga said Japan will lift its COVID-19 state of emergency for Osaka and five other prefectures at the end of the month.

The participants pushed the government to continue employing measures to curb infections in the six prefectures to prevent another resurgence of the virus.

They requested measures be implemented to maintain employment, especially for those in the tourism and restaurant sectors hit hard by the pandemic.

In January, Suga declared a state of emergency for 11 prefectures following a spike in virus infections.

Of the 10 prefectures under the emergency, Aichi, Gifu, Osaka, Kyoto, Hyogo and Fukuoka will be removed from the list a week earlier than the scheduled end date of March 7 as the number of daily new infections has dropped significantly and the strain on hospitals has eased.

However, Tokyo and the neighboring prefectures of Chiba, Kanagawa and Saitama will remain under the emergency declaration, which calls for people to stay at home as much as possible and for restaurants to close early.

Japan is set to inoculate its 36 million residents aged 65 or older in April before expanding the rollout to the rest of the populace.