Tensions were rising in Myanmar on Monday after the military deployed armored vehicles to the streets of the country's largest city Yangon the previous night while also putting in place an internet blackout overnight.

While it was previously thought Monday was the deadline for leader Aung San Suu Kyi's court-approved detention for a first formal charge leveled against her following the Feb. 1 coup, her lawyer said she will be remanded until Wednesday. 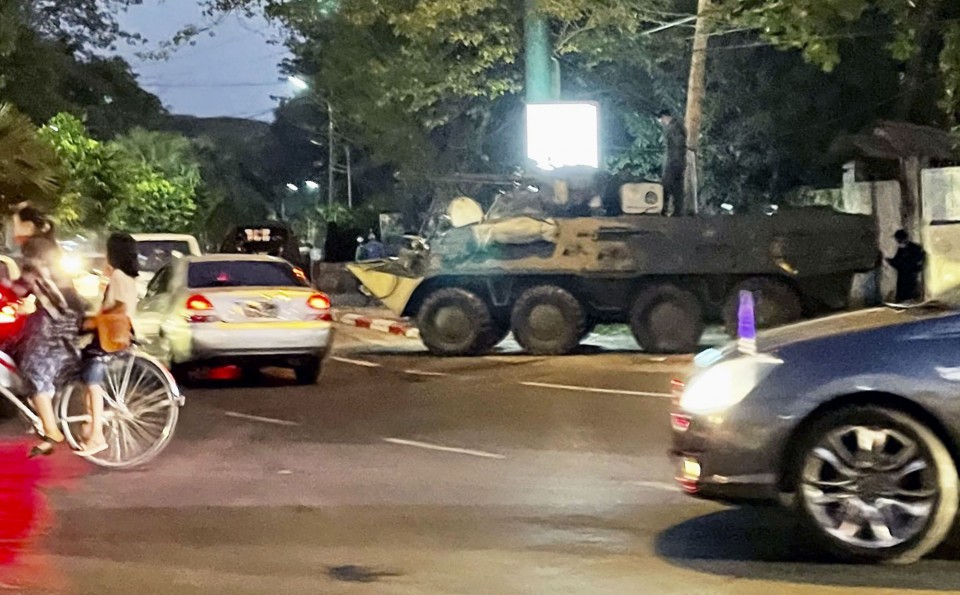 Two weeks after the military ousted Suu Kyi's elected government, it was girding itself for another day of mass protests calling for her release. Large demonstrations have been held across the country every day since Feb. 6.

In Yangon, the headquarters of Suu Kyi's National League for Democracy was surrounded by policemen and soldiers, but police and military trucks later left and a crowd of people who were also there dispersed peacefully.

Party officials inside the compound after security officers left told reporters that they had come to search for two Central Executive Committee members Aung Kyi Nyunt and May Win Myint, but neither were there. Most committee members have already been detained.

Video footage posted on social media showed military vehicles carrying troops on the streets of the second-largest city Mandalay. Weapons were fired to disperse protesters and some of them were beaten and detained, according to local media.

The U.S. Embassy in Yangon on Sunday tweeted an advisory to U.S. citizens to "shelter in place" during the 8 p.m.-4 a.m. curfew, citing "indications of military movements."

Telenor, a Norwegian telecom service provider that operates in Myanmar, said it received a directive from Myanmar authorities to shut internet access for a period.

An internet outage that was reportedly scheduled from 1 a.m. to 9 a.m. continued overnight. Access appears to have been restored in the morning.

Western ambassadors to Myanmar late Sunday issued a joint statement calling on the country's security forces "to refrain from using violence against demonstrators and civilians, who are protesting the overthrow of their legitimate government."

"We unequivocally condemn the detention and ongoing arrests of political leaders, civil society activists, and civil servants, as well as the harassment of journalists," said the ambassadors from Europe, the United States, Canada, Australia and New Zealand, adding, "The world is watching."

Suu Kyi remains under house arrest in the capital Naypyitaw.

After the coup, a court approved Suu Kyi's detention over allegations that she illegally imported and used communications equipment.

Suu Kyi's lawyer, Khin Maung Zaw, told Kyodo News that he visited a district court in the capital because he thought her detention was to end Feb. 15, but that a judge "clarified" to him that it is until Feb. 17 because police sought her remand only on Feb 3.

The judge also told him that her trial will be conducted via video conferencing. The lawyer said it is unclear if he will be allowed to be present at the court or only remotely.

The lawyer also said it is unclear how he can get Suu Kyi to sign a power of attorney letter that would empower him as her defense lawyer if the proceedings were held via video conferencing.

The current charge against her carries a sentence of up to three years in prison if convicted.

The military has justified the coup as a response to alleged massive irregularities in last November's general election that saw Suu Kyi's NLD win another resounding victory against a military-backed opposition party.