Amid ongoing protests in Myanmar against the Feb. 1 coup, citizens have begun to take China to task, condemning its silence about the overthrow of the elected government of Aung San Suu Kyi and its "backing" of the military.

Hundreds of people are demonstrating daily in front of the Chinese Embassy in Yangon, the largest city, holding up messages in English and Chinese criticizing Beijing and chanting things like "Don't support the military!" and "Chinese government get out."

Since the coup almost two weeks ago, China has not blamed the military at all, instead simply expressing hope that "all parties in Myanmar will properly handle their differences under the constitutional and legal framework and maintain political and social stability." 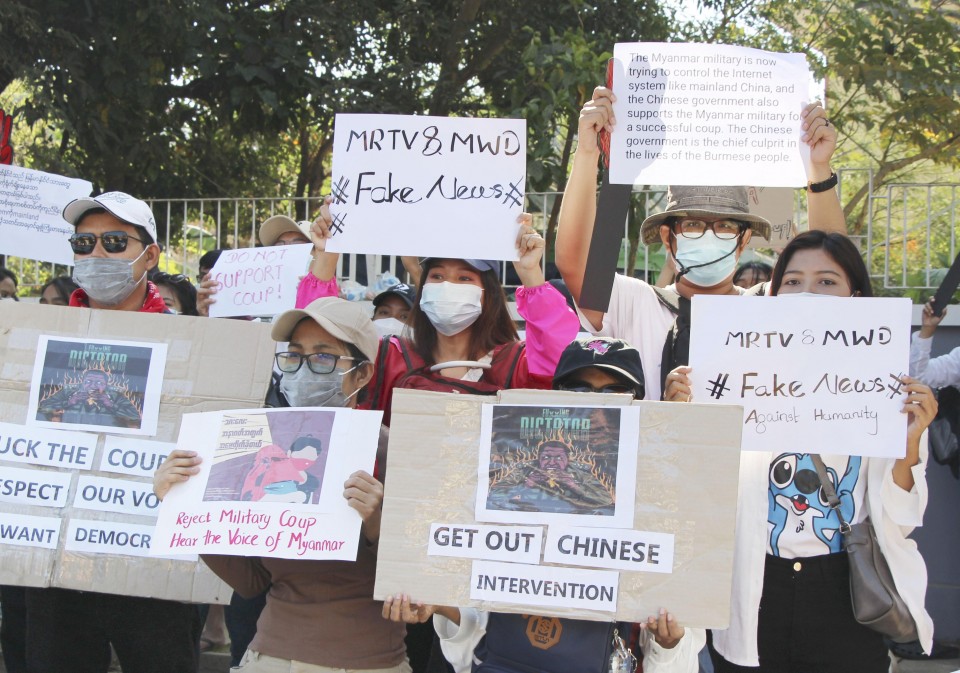 People show messages against China in a rally in front of the Chinese Embassy in Yangon on Feb. 11, 2021. (Kyodo)

"Whatever actions taken by the international community shall contribute to Myanmar's political and social stability, promote its peace and reconciliation, and avoid escalating the conflict and complicating the situation," Chinese Foreign Ministry spokesman Wang Wenbin said on Feb. 2, the day after the coup.

A statement issued by the U.N. Security Council on Feb. 4 called for the release of Suu Kyi and others detained by the military and voiced concern over the announced state of emergency, but the word "coup" was reportedly deleted from an initial draft due to opposition from China and Russia.

"Many people think that China is behind the coup," said Nyo, a kindergarten teacher who participated in a demonstration at the embassy.

Rumor has it that the military is rushing to enact a new cybersecurity law with the support of China in order to strengthen information control. A "draft" was distributed via SNS and is fueling criticism of China.

Sint Sint, 26, an ethnic Chinese student, said, "I came here with my friends to let the Chinese government know we don't like them supporting the military. Many of my ethnic Chinese friends have same opinion."

"I believe this youth-led movement will eventually be successful," she said.

Venessa, 22, another ethnic Chinese student, said, "We know that Chinese government is ignoring our opinion and not denouncing the military junta. We also see international news that China always rejects U.N. pressure on the military government. That's why we're protesting at the Chinese Embassy."

"We will continue our movement until we win eventually, no matter how long it takes," she added.

FOCUS: Japan in balancing act with U.S. over sanctions on Myanmar