Japan's Seiko Hashimoto, a former Olympic minister and a renowned female athlete, took over as head of the Tokyo Games organizing committee on Thursday, succeeding Yoshiro Mori who was forced to quit last week amid an uproar over sexist remarks.

Hashimoto, a seven-time Olympian, said preparing effective measures against the novel coronavirus is the "most important" task, and pledged to stage a "safe and secure" games this summer. <READ PROFILE HERE>

"It is my mission to host the games by prioritizing safety for both participants and the Japanese people, and create an atmosphere for athletes to go on the stage of their dreams without worrying," the 56-year-old said after she was formally approved as the new president by the committee's executive board.

With just five months until the opening of the Tokyo Olympics, Hashimoto took the helm of the committee that has been facing a host of challenges at a critical juncture in curbing the spread of the virus. 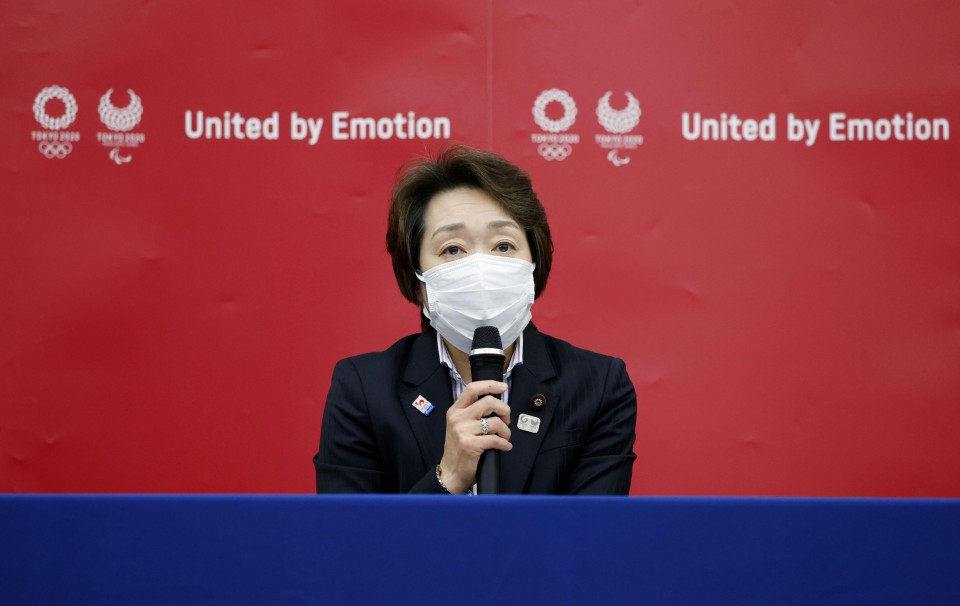 New Tokyo Olympic organizing committee head Seiko Hashimoto speaks during a press conference in Tokyo on Feb. 18, 2021, after the committee's executive board approved her taking the post. (Kyodo)

The torch relay will begin next month in the northeastern prefecture of Fukushima. Japanese officials are scheduled to decide by the end of spring whether to welcome fans from overseas and the number of spectators allowed at each venue.

Speaking at a press conference, Hashimoto, a Liberal Democratic Party lawmaker, said she accepted the position to "advance" the country's preparations disrupted by Mori's comments and vowed to restore trust in the committee by improving its gender equality.

Before the approval by the executive board, she met with Prime Minister Yoshihide Suga and stepped down as Olympic minister.

Suga told reporters that the government will support Hashimoto in holding a "safe and secure" games that are welcomed by all of Japan and the world. He also expressed confidence that she should be able to realize the ideals of the Olympics and Paralympics.

International Olympic Committee chief Thomas Bach said in a statement that Hashimoto is the "perfect choice" for the role, given her rich experience both as an athlete and politician.

Tokyo Gov. Yuriko Koike said in a statement she expects Hashimoto to work toward the Olympics, due to begin July 23, with an athlete's point of view and promised to keep cooperating with the organizing committee, the government and the IOC for the success of the games based on the concept of "diversity and harmony."

The executive board was informed earlier in the day that Hashimoto accepted the offer after she was asked to take up the top position by a selection panel.

Following calls for transparency in the selection process, the eight-member panel, headed by Canon Inc. Chairman Fujio Mitarai, screened candidates based on five criteria it decided during its first meeting on Tuesday.

The criteria for the candidate include having an international profile and a knowledge of the Olympics and Paralympics, as well as a "deep understanding" of gender equality.

Mori, an 83-year-old former Japanese prime minister, resigned Friday after drawing criticism at home and abroad for saying at a Japanese Olympic Committee gathering on Feb. 3 that meetings with women tend to "drag on" because they talk too much. He also suggested that women's speaking time needs to be restricted.

During the press conference, Hashimoto, who started her political career in 1995, said Mori is a "special person" and her "mentor" who showed her the way in the world of politics. She added that there will be times when she asks for his advice.

Mori, who holds influence in Japan's sport community, also drew criticism for attempting to usher in Saburo Kawabuchi, a former president of the Japan Football Association, as his successor through the backdoor.

While the committee pledged to ensure transparency in the selection process, meetings of the panel were held behind closed doors. The committee has also refused to officially confirm the panel's makeup, although it has been widely reported.

In 2019, Hashimoto took the role of minister in charge of women's empowerment and gender equality, holding the position in combination with her responsibilities related to the Tokyo Games. 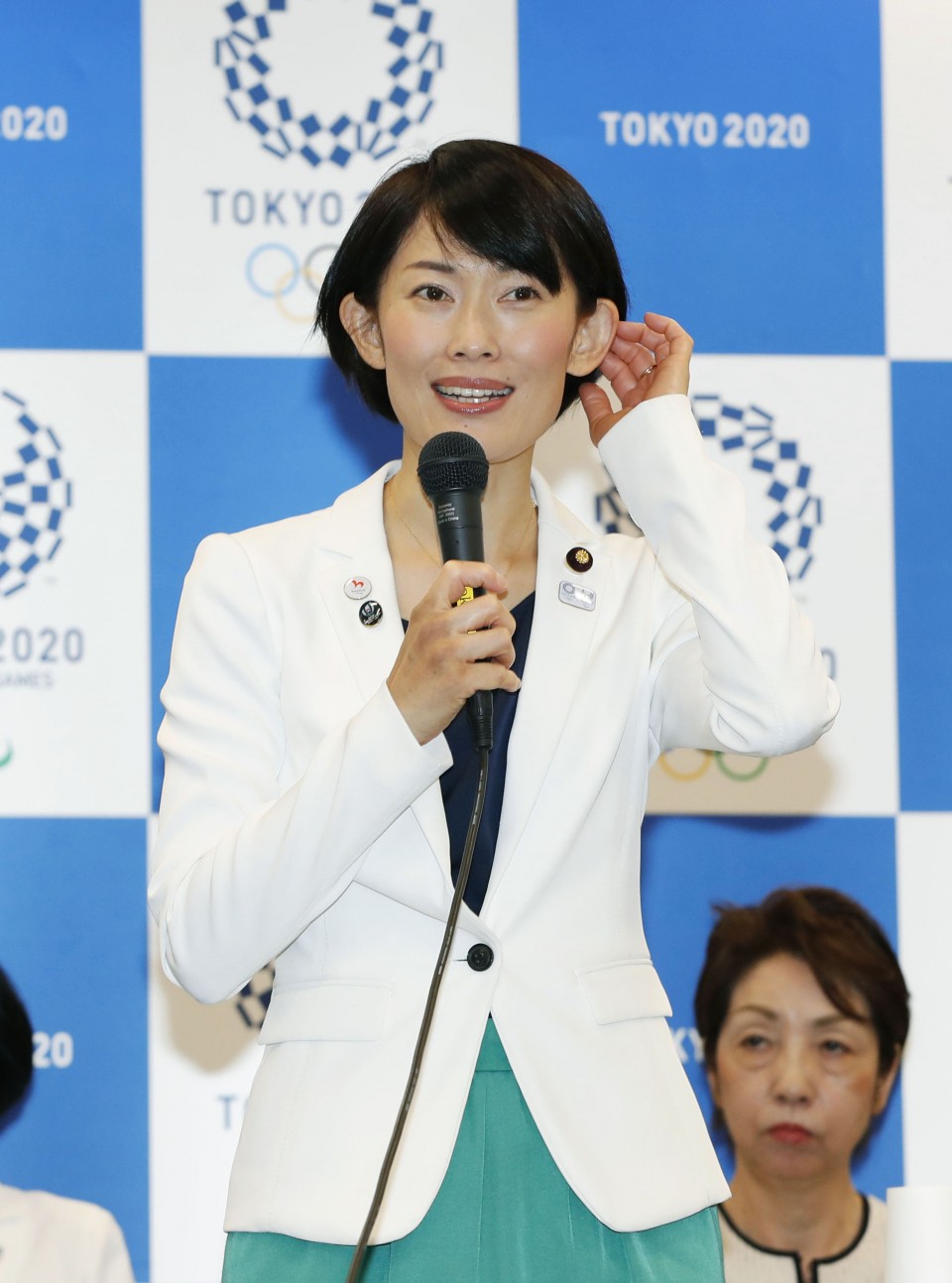 Tamayo Marukawa speaks at a press conference in Tokyo on May 22, 2017, as Japan's then Olympic minister. (Kyodo)

Tamayo Marukawa, a 50-year-old newscaster-turned-lawmaker of the LDP, took over Hashimoto's ministerial portfolios.

Yoshiko Urushidate, 50, who has signed up as a volunteer for the games, said Hashimoto is a good pick due to her experience as a medalist and female politician.

"I hope she works to make the event one that athletes can feel comfortable attending. I want to be involved in any way in bringing smiles to the athletes and spectators," Urushidate said.

Hashimoto has been regarded as a pioneer in Japan's male-dominated political sphere. Her absence from the Diet session in 2000 to give birth prompted parliament to allow maternity leave for its members for the first time.

Hashimoto appeared at seven Olympics between 1984 and 1996, competing in speed skating at four Winter Games and track cycling at three Summer Games. She won bronze in the women's 1,500-meter speed skating event at the 1992 Games in Albertville, France.

Born in Hokkaido just five days before the opening of the 1964 Summer Games in Tokyo, her name Seiko is written with the same first character, "seika," used to mean the Olympic flame in Japanese.

In 2014, she made a public apology following an allegation of sexual harassment reported by a weekly magazine. She was accused of forcing Japanese figure skater Daisuke Takahashi to accept her kisses during a dinner party after the Sochi Olympics.