Shimane, one of Japan's 47 prefectures, may cancel its Tokyo Olympic torch relay events if the coronavirus situation does not improve in the capital, Gov. Tatsuya Maruyama said Wednesday, in the latest sign of skepticism in the country over whether the games can be staged safely this summer amid the pandemic.

Maruyama told a press conference that he is against holding the Olympics and the preceding torch relay as he believes the antivirus measures of the central and Tokyo metropolitan governments are not sufficient to prevent the spread of the coronavirus.

"As a prefecture, we cannot pledge our full support (for the torch relay) if the current situation continues," he said.

Earlier at a meeting of the prefectural government's planning committee on the relay, Maruyama said the decision on whether Shimane will stage the torch relay would be determined by the central and Tokyo metropolitan governments' measures. 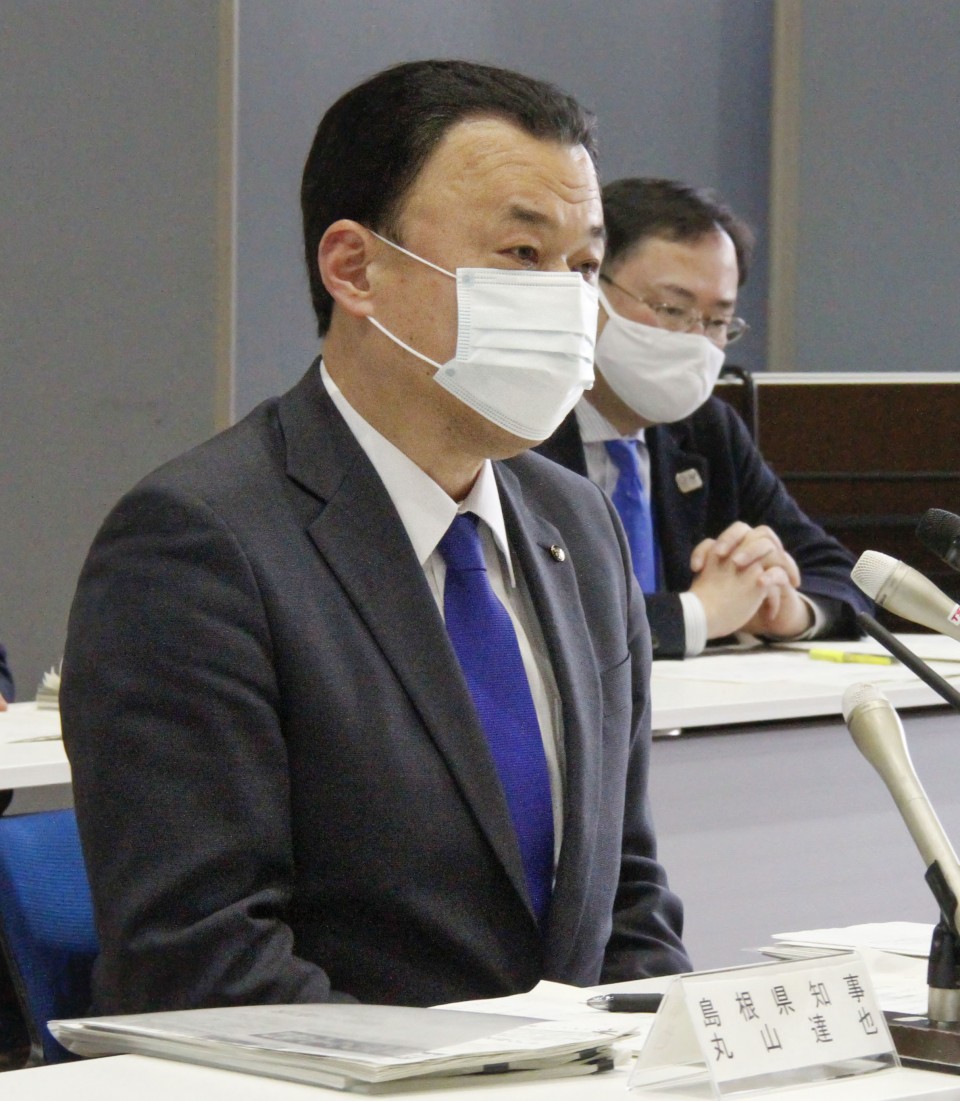 Shimane Gov. Tatsuya Maruyama is pictured in Matsue on Feb. 17, 2021, at the prefectural government's planning committee on the Tokyo Olympic torch relay. (Kyodo)

The torch relay is set to begin March 25 at the J-Village soccer training center in Fukushima Prefecture and currently due to pass through the western prefecture in May.

The remarks by Maruyama, who also criticized the state and Tokyo government over their antivirus measures at a press conference last week, are seen as intended to increase pressure on them to improve their handling of the pandemic.

The Summer Games, which were postponed for one year due to the pandemic, are scheduled to open on July 23 and continue through Aug. 8, and the Olympic torch is scheduled to be carried through the prefecture on May 15 and 16.

Some torchbearers disagreed with the governor's views on the torch relay.

"My desire to run in the torch relay has not changed. I believe that the event will be held," said Shinsuke Kayama, a 61-year-old native of Matsue, who competed in the 1976 Montreal Olympics as a swimmer.

The Tokyo Olympic organizing committee said in December that the domestic leg of the torch relay will pass through 859 municipalities across the country's 47 prefectures, with the itinerary unchanged from before the games were postponed.

Shimane's threat to withdraw from participation in the torch relay reflects strong public skepticism over the hosting of the Olympics and Paralympics this summer. In a Kyodo News survey conducted earlier this month, more than 80 percent of respondents in Japan said they believe the postponed games should be canceled or rescheduled.

The threat also poses another headache for the Summer Games organizers after Yoshiro Mori announced his resignation as the Tokyo Olympic organizing committee chief last week over sexist remarks.

At present, the International Olympic Committee and Tokyo Games organizers are insisting the events will be held as scheduled, with IOC President Thomas Bach saying there is "no plan B."

Nationwide coronavirus infections have been on a declining trend lately after the central government declared a state of emergency in the capital and some other areas in January, calling for people to refrain from unnecessary outings and for restaurants and bars to close early.

Shimane Prefecture, with a population of about 666,000, has so far confirmed about 280 coronavirus cases, while the number of infections in Tokyo totaled 108,337 as of Wednesday.