Japan's communications ministry reprimanded 11 officials on Wednesday for ethics code violations after they were treated to expensive meals by officials of a broadcasting company, including the eldest son of Prime Minister Yoshihide Suga. 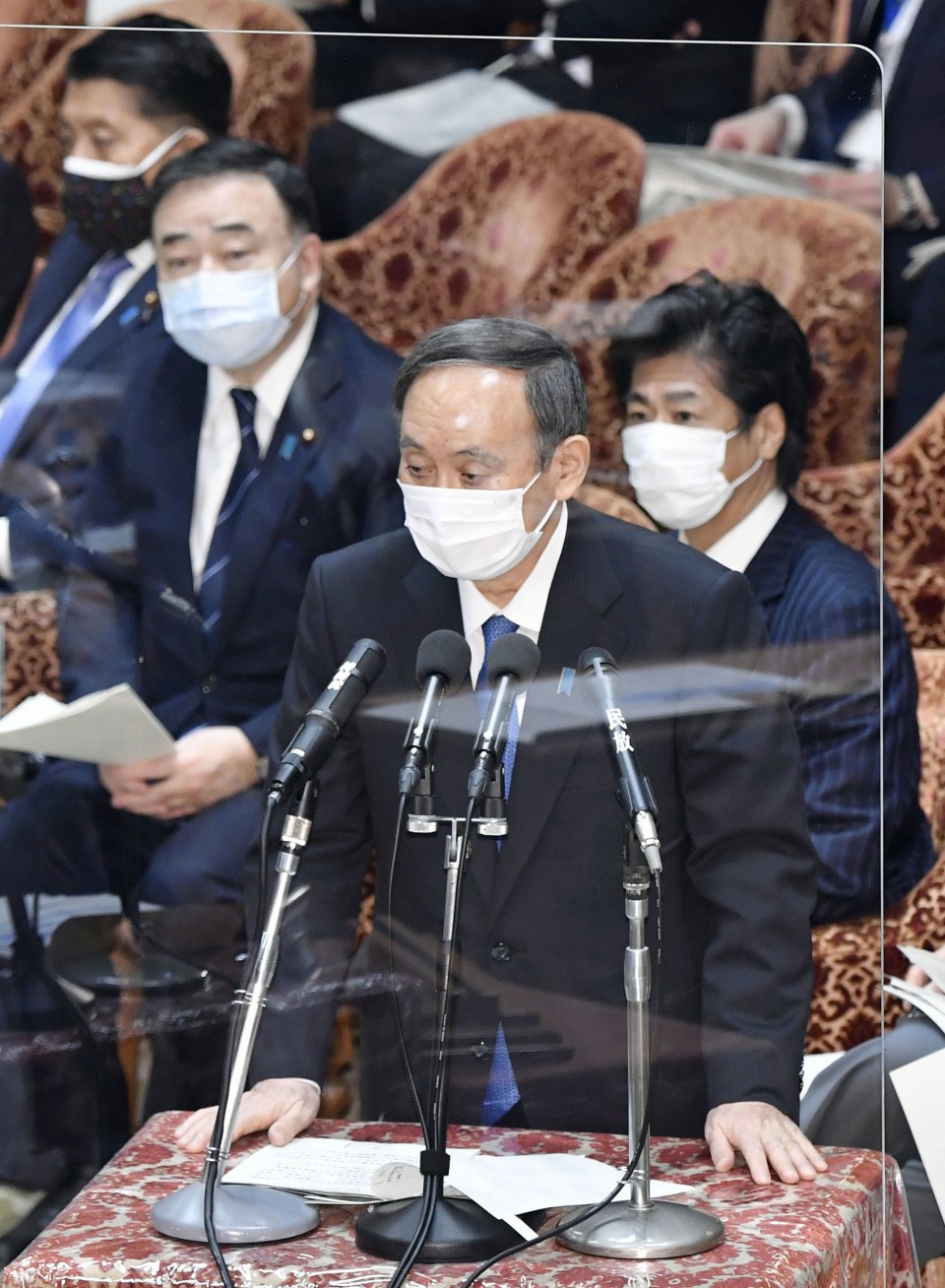 Japanese Prime Minister Yoshihide Suga speaks during a House of Representatives Budget Committee session in Tokyo on Feb. 22, 2021, with a transparent acrylic board set in front of him to prevent coronavirus infections. (Kyodo)

"My eldest son's involvement led to violations of the ethics law. I'm truly sorry and would like to apologize to the public," Suga told reporters.

The ministry determined that the officials had been wined and dined on a combined 39 occasions by Seigo Suga or other members of Tohokushinsha Film Corp., a company that offers satellite broadcasting services, to which the ministry grants licenses.

The ministry said the 11 officials were slapped with pay cuts or warnings, while Internal Affairs and Communications Minister Ryota Takeda will voluntarily return three months of his Cabinet member's pay.

One of the 13 officials, Cabinet Public Relations Secretary Makiko Yamada, who was then vice minister for policy coordination at the ministry, was not reprimanded as she has since retired from the ministry and the ethics code does not cover an individual granted a special status to serve in a government post.

But Yamada was admonished by the prime minister and Chief Cabinet Secretary Katsunobu Kato said she will voluntarily return 60 percent of her salary for one month and swiftly pay her portion of the restaurant bill covered by the company.

Yamada was found by the ministry to have been treated to a meal worth 74,000 yen ($700) that Kato revealed consisted of seafood and wagyu beef steak. The amount spent on that dinner attended by Yamada, the Tohokushinsha Film president and three company officials, including Seigo Suga, totaled more than 370,000 yen, he said.

Kato told the House of Representatives' Cabinet committee that Yamada had explained she did not believe at the time that the dinner would be problematic and she was not aware that the prime minister's son would be attending.

The ruling Liberal Democratic Party said it will summon Yamada as a witness to the lower house Budget Committee on Thursday as sought by the Constitutional Democratic Party of Japan after the main opposition party threatened to boycott deliberations.

The ministry said it will set up a probe panel headed by a senior vice minister after Takeda pledged to thoroughly reinvestigate the matter to make sure there were no instances of a quid pro quo.

It also plans to implement stricter checks on dinner meetings beforehand, as well as conducting workshops for employees to prevent a recurrence.

Of the 39 such occasions between July 2016 and December 2020, the ministry's probe found the prime minister's son attended 21. The amount shouldered by the company totaled 608,000 yen.

Seigo Suga is also a board member of a Tohokushinsha subsidiary that was granted a license by the ministry. It was previously established that he dined with Yoshinori Akimoto, former director general of the information and communications bureau, and Hironobu Yumoto, former deputy director general of the bureau, as well as Yasuhiko Taniwaki and Mabito Yoshida, both vice ministers for policy coordination at the ministry.

Akimoto and Yumoto were removed from their posts last week following the revelation of the scandal.

Among the 13 officials, the four were the only ones given taxi tickets and gifts by Seigo Suga. Taniwaki received the largest amount of favors worth 118,000 yen, according to the ministry.

Meanwhile, Tohokushinsha apologized on its website, saying it was taking the incident "very seriously."

Weekly magazine Shukan Bunshun released online what it claimed was an audio recording of Seigo Suga repeatedly mentioning satellite broadcasting in conversations with Akimoto and another Tohokushinsha executive.

The ministry quickly replaced Akimoto and Yumoto after the scandal surfaced, apparently seeking to prevent it from affecting deliberations in the Diet, including on a bill for the fiscal 2021 draft budget.

According to the weekly magazine, Suga's son became acquainted with some of the officials when he served as secretary to his father, internal affairs and communications minister between 2006 and 2007.

Suga has said he was not aware of the dinners involving his son and the officials but has apologized for his son's involvement.