This year will be critical for Prime Minister Yoshihide Suga's hopes of remaining in power as he mulls the timing of a general election while steering Japan's response to the coronavirus and pushing ahead with plans to hold the postponed 2020 Tokyo Olympics in the summer. 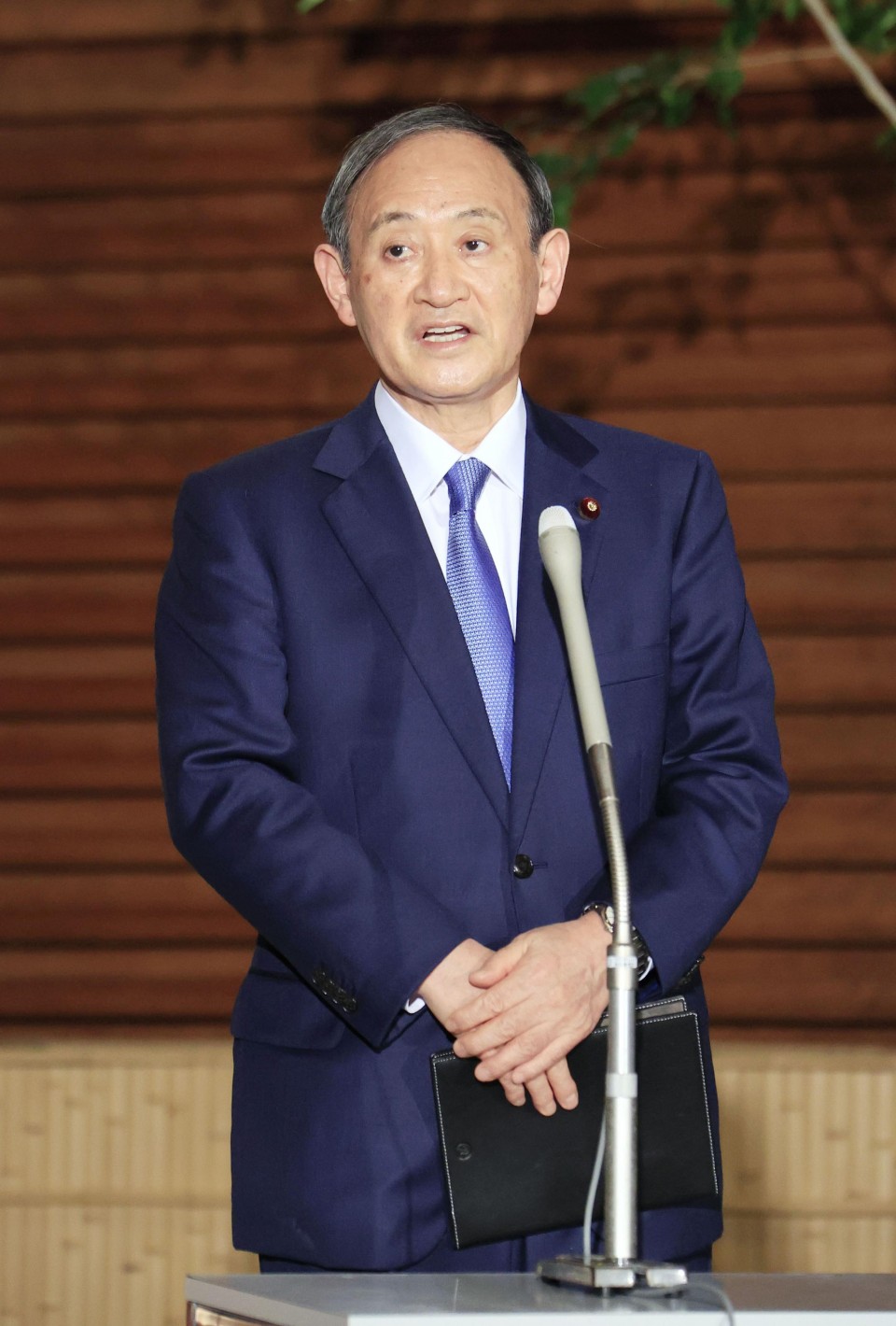 Japanese Prime Minister Yoshihide Suga talks to the press after meeting with ministers at his office in Tokyo on Dec. 31, 2020. Tokyo reported over 1,300 new infection cases, a record high, the same day. (Kyodo) ==Kyodo

With his support ratings in decline amid dissatisfaction with his government's pandemic response and a series of money scandals within the ruling Liberal Democratic Party making headlines, he cannot afford any missteps.

Suga's window to dissolve the House of Representatives for the general election is gradually closing -- his current term as leader of the LDP concludes at the end of September and the four-year term for lower house members finishes on Oct. 21.

Having taken office following his predecessor Shinzo Abe's sudden resignation for health reasons this past September, it will be Suga's first national ballot and a chance to gain a strong mandate from voters.

Suga was highly popular at first, having endeared himself to the public as the pancake-eating son of a strawberry farmer from Akita Prefecture who unlike many of his fellow lawmakers does not hail from a political dynasty.

A Kyodo News poll conducted just after Suga's inauguration showed support for his Cabinet at 66.4 percent. Abe, who had been dogged by favoritism and money scandals, had a rating of 36.0 percent before announcing his intention to step down.

But Suga is now facing criticism for a third wave of coronavirus cases that appears to have been exacerbated by his drive to restart economic activity. A record 4,520 new infections were reported nationwide on Thursday, putting Japan's cumulative total above 240,000.

Despite the dire situation, the government held off until the last minute announcing the suspension of its "Go To Travel" subsidy program, aimed at boosting domestic tourism, during the New Year holidays. It has not declared another state of emergency even amid warnings that the health care system is on the brink of collapse.

Japan looking at declaring another state of emergency over virus

"Mr. Suga chose to prioritize the economy, and while the economy is indeed important, right now the public cares more about taking steps to fight the coronavirus," said Hitoshi Komiya, a professor of Japanese political history at Aoyama Gakuin University.

The approval rating for Suga's Cabinet has fallen to 50.3 percent, according to the latest Kyodo News poll conducted in early December. Several other media outlets have it at around 40 percent.

While that's still above 30 percent -- the "danger zone" where an administration is at risk of an early demise -- it poses a headache for the prime minister as he contemplates the best timing for a general election.

Suga has vowed to bring the coronavirus under control before dissolving the lower house. That could hinge on the rollout of vaccines, which government officials said may start in February at the earliest with frontline health care workers.

Naoto Nonaka, a professor of comparative politics at Gakushuin University, says the best scenario for the prime minister remaining in power is to quickly distribute vaccines, get the economy back up and running, host a safe and successful Tokyo Olympics and Paralympics, and then call a general election.

"The question is, will things go so smoothly? (Lawmakers) get jittery when they know a general election is looming. If Suga's support ratings fall past a certain point, he will certainly face calls from within the LDP to step down," Nonaka said.

Suga will also have to fend off criticism from opposition parties over Abe's spending of political funds on dinner receptions attended by his supporters, and allegations that two former farm ministers belonging to the LDP received bribes from an egg farming company.

Suga served under Abe for nearly eight years as chief Cabinet secretary and consistently defended him until the former premier apologized for making false statements in parliament on the dinner expenses late last month.

The prime minister is especially vulnerable because he does not have factional support within the LDP, and therefore must have public opinion firmly on his side if he is to survive, Komiya said.

But communication has never been Suga's strength -- his defining trait in his previous role as chief Cabinet secretary, the government's top spokesman, was being tight-lipped and fending off difficult questions from reporters. He only holds press conferences on rare occasions, and even then tends to stick to prepared answers.

The prime minister also came under fire in December for enjoying a steak dinner with celebrities, muddying the government's message about refraining from meals with five or more people.

"He doesn't seem to understand what he needs to say to get his message across. He needs a better strategy to face the media, and by extension the public," Komiya said.

Suga himself acknowledged this at a Christmas Day press conference, apologizing for the steak dinner and pledging to "make an effort to communicate with the people more clearly."