Bank of Japan Governor Haruhiko Kuroda on Thursday warned of downside risks to the economy hit by another state of emergency over the novel coronavirus, as its outlook for the current business year was slightly cut.

But Kuroda brushed aside concerns that Japan may slip back into deflation. He also said the central bank will check "the balance" between the benefits and side-effects of the policy tools that have been employed to attain its 2 percent inflation target, already elusive and now further away amid the pandemic. 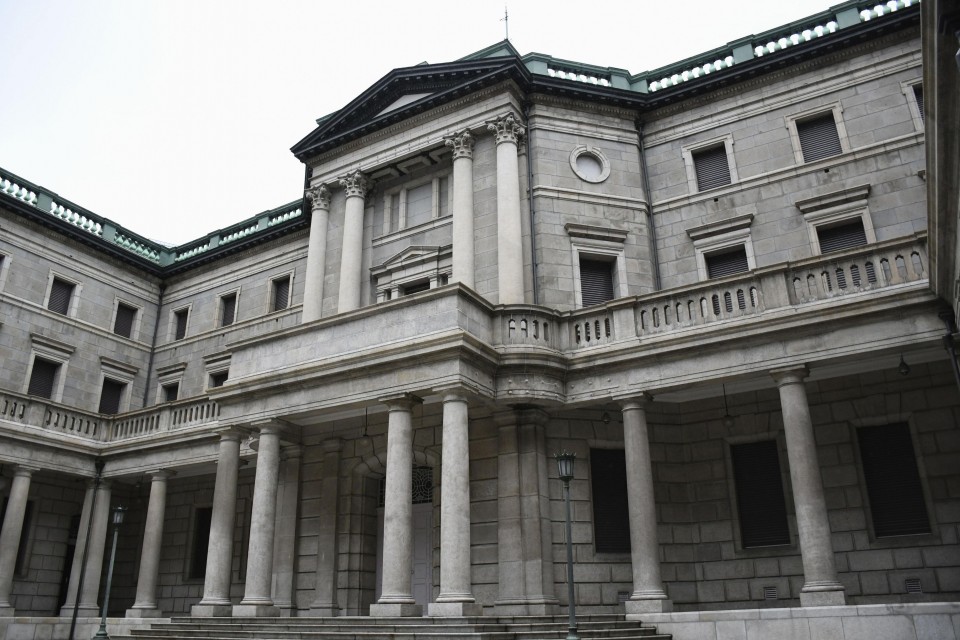 The Bank of Japan building. (Kyodo)

The BOJ is reviewing its ammunition and plans to announce its findings as early as March.

The bank will take additional easing steps if needed, Kuroda said. Earlier in the day, the BOJ board decided to maintain its ultraloose monetary policy at the end of a two-day meeting.

"There is heightened uncertainty over the impact that the spread of infections would have on the economy and finance," Kuroda told a press conference after the policy meeting. "We will be keeping a close watch and will not hesitate to take additional easing steps when deemed necessary."

His remarks came after the BOJ cut its economic outlook for fiscal 2020 through March to a 5.6 percent contraction, against its forecast in October of a 5.5 percent shrinkage.

For next fiscal year, however, the bank took a more upbeat view, factoring in support from the government's economic stimulus and a recovery in Japan's exports despite major economies like the United States still struggling to cope with surging coronavirus cases.

The Japanese economy, measured in real gross domestic product, is expected to grow 3.9 percent in fiscal 2021, an upgrade from its previous estimate of a 3.6 percent expansion, according to the BOJ's quarterly outlook report released Thursday.

At the policy meeting, the BOJ decided to keep short-term interest rates at minus 0.1 percent while guiding long-term interest rates to around zero percent. It will also continue to buy exchange-traded funds at an annual pace of 12 trillion yen ($116 billion) as part of its massive asset purchase program.

"Japan's economy has picked up as a trend, although it has remained in a severe situation due to the impact of COVID-19 at home and abroad," the BOJ said, tweaking the expression from the previous meeting in December.

The second state of emergency for some areas including Tokyo and Osaka, which account for more than half of the country's economic output, has darkened the outlook. In Japan, COVID-19 vaccinations have yet to begin.

Kuroda said he is keeping tabs on developments in the United States where Joe Biden was sworn in as new president on Wednesday, raising hopes for more fiscal stimulus to address the economic fallout from the pandemic.

"U.S. policy management would have a big impact on the world's economy and financial markets," Kuroda said.

The BOJ board also decided to maintain a spate of steps aimed at supporting corporate finance, including the provision of funding to banks that extend zero-interest loans to pandemic-hit companies as well as buying of commercial paper and corporate bonds.

The services sector has taken a severe hit as restaurants, hotels and retailers are affected by more people staying home and cutting back on spending. Consumption is expected to face downward pressure for the time being, according to the outlook report.

Financial markets are looking for clues as to the BOJ's forthcoming policy review. The purpose of the assessment is to maintain monetary easing while minimizing its side effects, Kuroda said. "If there are ways to make it sustainable and effective, we will adopt them."

BOJ watchers say the central bank wants to secure wiggle room to respond flexibly when needed, given that the bank is perceived as having little ammunition left, after years of low interest rates and aggressive buying of assets like ETFs have raised concerns about the side effects of its policies.

But the BOJ will be forced to manage a delicate balancing act in making any policy tweaks without being perceived as moving toward tapering its massive monetary stimulus at a time when the U.S. Federal Reserve and the European Central Bank stand ready to ease their policies further.

BOJ Deputy Governor Masayoshi Amamiya stayed home and was absent from the policy meeting on Thursday after a relative took a PCR test for the virus, the central bank said.