Prime Minister Yoshihide Suga on Monday pledged to bring the coronavirus pandemic under control in Japan "as soon as possible" and continue preparations to host the Tokyo Olympics and Paralympics this summer.

In a policy speech marking the start of this year's ordinary parliamentary session, Suga also vowed to promote green technology and digitalization as drivers of economic growth while laying out his foreign policy agenda. 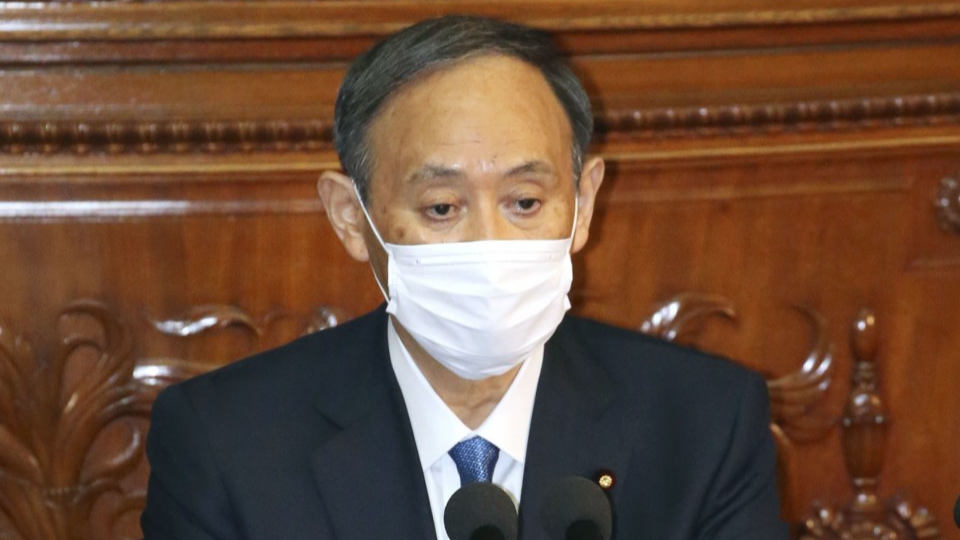 Suga said the government is taking "effective measures" to contain the spread of coronavirus infections under a state of emergency covering 11 prefectures including Tokyo, asking the public to cooperate with requests to stay home and for restaurants and bars to close early.

"I will stand on the frontline of this battle (against the virus)...and with the people's help, I am resolved to overcome this difficult situation," he said.

Suga reiterated the government will prepare for coronavirus vaccinations to begin in Japan by late February following procedures to confirm their safety and efficacy. The 72-year-old leader said he will "set an example" by taking the vaccine himself to dispel any skepticism among the public.

The government will step up support for hospitals treating COVID-19 patients, the premier said, adding, "What is important is that everyone requiring medical care receives the treatment they need."

During the 150-day parliamentary session through June 16, the government hopes to pass legislation making it possible to punish people and businesses that refuse to comply with its coronavirus measures.

The penalties include a maximum fine of 1 million yen ($9,600) or a prison sentence of up to one year for people who test positive for the virus yet refuse to be hospitalized, and a maximum fine of 500,000 yen for businesses that fail to comply with government requests to adopt shorter hours or temporarily shut down.

Success in dealing with the coronavirus is crucial for Suga to retain his grip on power after his current term as leader of the ruling Liberal Democratic Party ends in September.

His Cabinet's approval ratings have plummeted amid widespread dissatisfaction with his pandemic response, narrowing his options for when to dissolve the House of Representatives for a general election.

Opposition parties have accused the government of sitting on its hands while Japan has been gripped by its sharpest spike in infections.

"This is a once-in-a-century crisis, yet I don't get any sense of urgency from the prime minister's speech," Yukio Edano, leader of the Constitutional Democratic Party of Japan, told reporters.

The opposition is also expected to ramp up their criticism in the Diet over separate scandals involving Suga's predecessor Shinzo Abe and a former farm minister who was indicted last week on a charge of accepting bribes.

In his speech, Suga apologized for making what turned out to be false statements defending his boss over spending on dinner functions held on the eve of the government's annual cherry blossom viewing parties. Suga was chief Cabinet secretary under Abe. 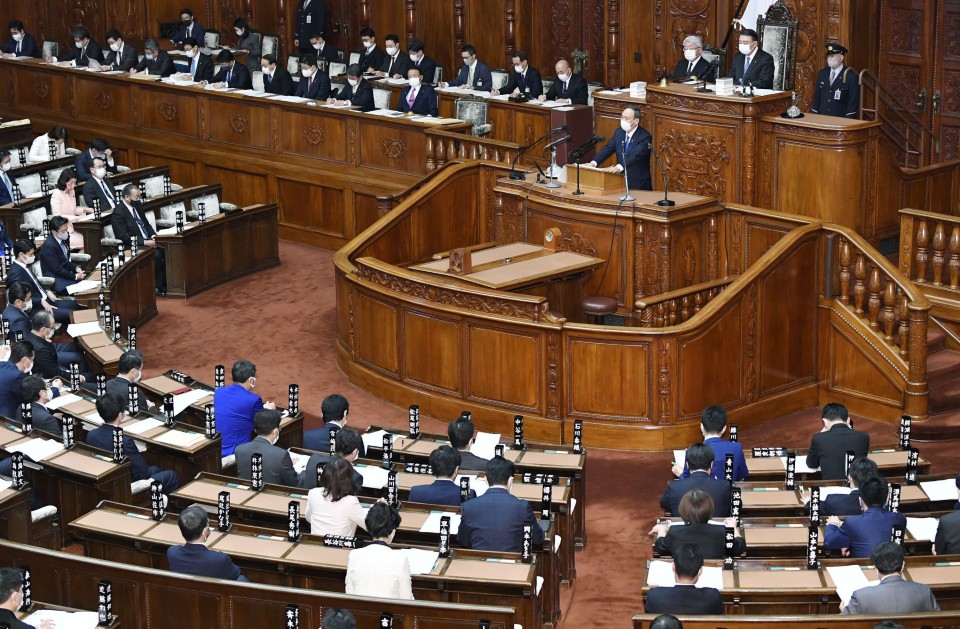 The prime minister said the Tokyo Olympics and Paralympics, slated to kick off in July after last year's unprecedented postponement, will serve as "proof that humanity defeated the coronavirus" as well as an opportunity to display Japan's recovery from the 2011 earthquake, tsunami and Fukushima nuclear crisis.

The public, however, remains skeptical that the games can go ahead during the pandemic. A Kyodo News survey conducted this month showed around 80 percent of Japanese favor rescheduling the events again or canceling them.

"We need to start thinking of a Plan B if and when the Olympics are not going to be held," said Yuichiro Tamaki, leader of the Democratic Party for the People.

As the world's third-largest economy negotiates the fallout from the coronavirus, Suga promised to fulfill his "political responsibility" to keep businesses afloat and protect jobs.

The prime minister reiterated his focus on promoting innovation in green technologies such as solar power, saying the government will induce private-sector investment domestically and from abroad through financial market mechanisms.

Japan will aim to have electrified vehicles -- expected to include electric cars, hybrids, plug-in hybrids and fuel cell vehicles -- make up 100 percent of its new car sales by 2035, he said, following similar moves by China and major European countries.

Suga has made the environment one of his main focuses, vowing that Japan will achieve carbon neutrality, or net zero emissions of carbon dioxide, by 2050.

He promised to unveil an "ambitious" new target for reductions in greenhouse gas emissions through 2030 before the U.N. climate change conference in November.

Digitalization will be a key symbol of administrative reform, Suga said, with a new government agency being launched in September to serve as a "command tower" for the efforts.

On foreign policy, Suga said Japan values multilateralism and would seek to work with other members of the international community while taking a leadership role in creating a post-coronavirus world order.

Meanwhile, Japan's alliance with the United States remains the foundation not only of its own diplomatic and security policy but also the peace and prosperity of the Indo-Pacific region and beyond, he said. The premier expressed hope he will be able to meet with U.S. President-elect Joe Biden as soon as possible.

Relations with South Korea are in an "extremely difficult situation," Suga said, reflecting recent tensions over a Seoul court ruling on Korean "comfort women," a euphemism for those who suffered in Japanese military brothels before and during World War II.

He said Japan would work to resolve "various issues" with China, presumably including a territorial dispute over the Senkaku Islands in the East China Sea, as well as seek progress on negotiations with Russia to settle the issue of Moscow-held islands off Hokkaido and signing a peace treaty with the country.

The prime minister reiterated he is willing to meet with North Korean leader Kim Jong Un "without preconditions," in hopes of resolving the issue of the North's abduction of Japanese nationals in the 1970s and 1980s.