Daieisho, who beat the three current ozeki over the tournament's first three days, remained in a three-way tie for the lead of the 15-day tournament at Tokyo's Ryogoku Kokugikan with fellow rank-and-filers Meisei and Akiseyama. 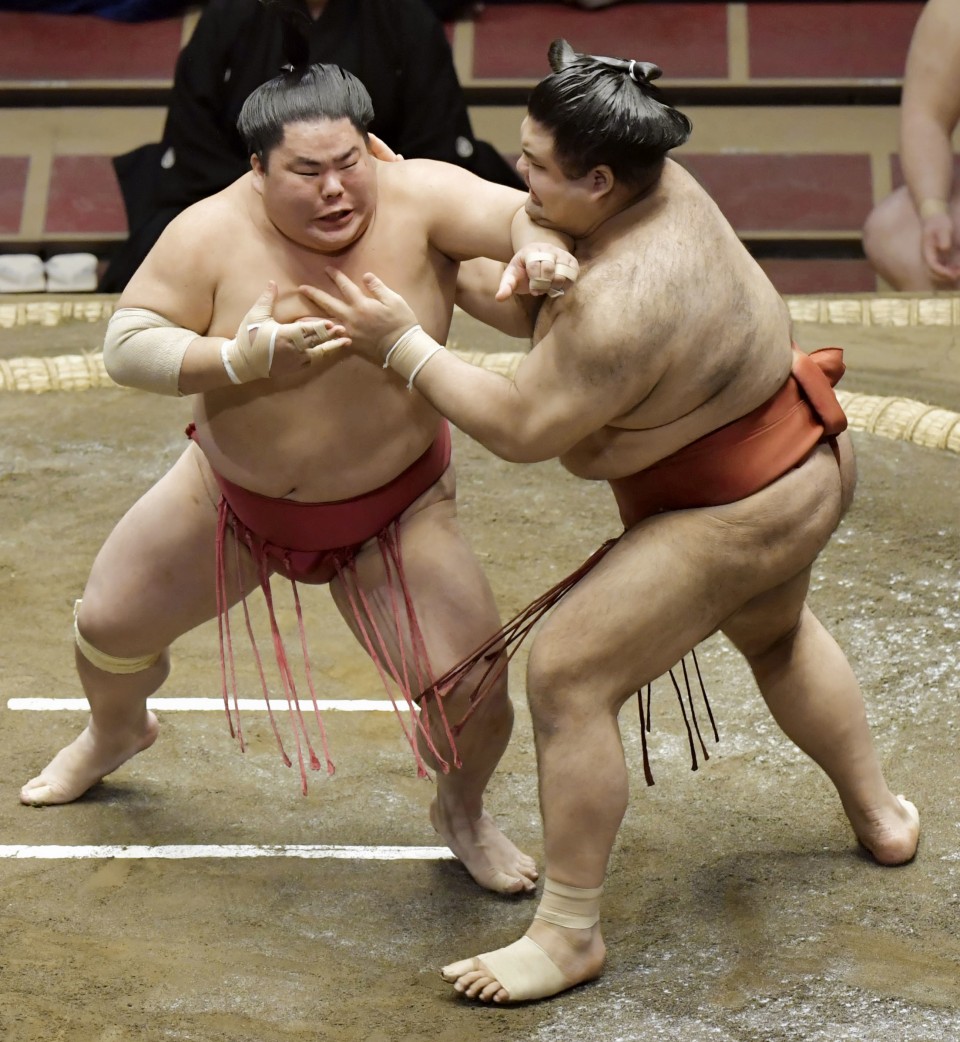 Takayasu (2-3), currently a komusubi, had a slight opening at the start of the bout as Daieisho struggled to get traction on the sandy surface after their mid-ring collision. But Daieisho remained poised, drove forward and took control of the bout when Takayasu whiffed on a slap-down attempt and lost his balance.

Daieisho will face another former ozeki, sekiwake Terunofuji (3-2), on Friday. Terunofuji has twice won 13 bouts in his three tourneys since returning to the makuuchi division in July from serious knee injuries.

The Mongolian sekiwake bounced back from Wednesday's loss to Takayasu by pushing out No. 1 maegashira Hokutofuji (1-4).

Ozeki Takakeisho, who entered the tournament with a chance of earning promotion to yokozuna, finally earned his first victory, thrusting down No. 3 Kotoshoho (0-5).

With both current yokozuna out of action, Hakuho with a coronavirus infection, and Kakuryu due to lower-back trouble, the three ozeki are the kings of the hill here, and for the first time, all came out on top.

Shodai and Asanoyama, both needing eight wins here to avoid demotion from ozeki to sekiwake in March, each picked up big wins.

Asanoyama earned his third win with a quick victory over former ozeki Tochinoshin (2-3), while Shodai (4-1) hung on to beat No. 2 Takarafuji (2-3).

A day after beating Takakeisho, Takarafuji narrowly lost a see-saw bout as both he and Shodai avoided being thrown out of the ring before the ozeki finally prevailed.

No. 7 Meisei remained unbeaten by fighting off an aggressive charge by No. 8 Tokushoryu before forcing last year's surprise New Year champ out to his third loss.

No. 16 maegashira Akiseyama, who at the age of 35 is fighting his second tournament in the makuuchi division, beat 21-year-old No. 14 Hoshoryu (0-5) to improve to 5-0. Akiseyama has now surpassed the four wins he recorded in his March 2016 makuuchi debut.

The tournament, the first being held by the Japan Sumo Association during a state of emergency, is missing 65 wrestlers due to coronavirus-related issues, with 15 of those coming from the makuuchi division and the second-tier juryo division.

Sumo: Takakeisho all but out of yokozuna hunt with 4th loss in row