Sumo: Takakeisho all but out of yokozuna hunt with 4th loss in row

Takakeisho, who entered the New Year Grand Sumo Tournament with a shot at promotion to yokozuna, fell to his fourth straight loss on Wednesday, this time to rank-and-file opponent Takarafuji.

The ozeki went to his trusted pushing and thrusting techniques in the final bout of Day 4, but could not keep No. 2 maegashira Takarafuji directly in front of him. 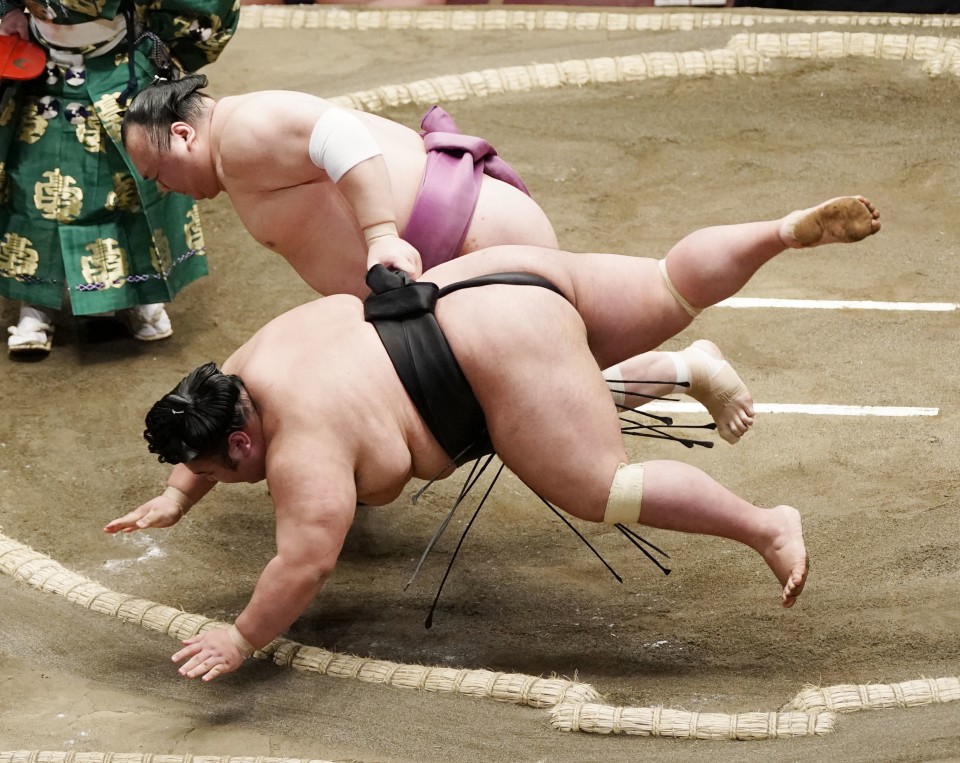 No. 2 maegashira Takarafuji (top) topples ozeki Takakeisho with an overarm throw on Day 4 of the New Year Grand Sumo Tournament at Ryogoku Kokugikan in Tokyo on Jan. 13, 2021. (Kyodo)

After catching Takakeisho by the arm, Takarafuji (2-2) quickly sent him and his hopes for yokozuna promotion tumbling with an overarm throw.

"I wasn't really thinking too much, I just got the grip naturally," said former sekiwake Takarafuji, who is aiming to return to the elite "sanyaku" ranks below yokozuna.

"I'm satisfied with the quality of the sumo I've been showing. I just want to keep it up."

The other two ozeki rebounded from Day 3 losses with convincing victories.

Asanoyama dominated previously unbeaten No. 3 Onosho to improve to 2-2. The powerfully built Takasago stable grappler secured an underarm grip at the jump before driving Onosho (3-1) straight out.

Shodai (3-1) got back on track after his first defeat by manhandling up-and-coming No. 3 Kotoshoho (0-4).

The ozeki absorbed a heavy opening hit from the imposing youngster before locking him up by the arm and shoving him out.

Both Shodai and Asanoyama are competing as demotion-threatened "kadoban" ozeki and need eight wins here to stay at sumo's second-highest rank.

Ozeki slayer Daieisho continued his outstanding tournament by adding komusubi Mitakeumi to his list of victims.

The No. 1 maegashira, who beat each of the ozeki over the first three days, remained perfect at 4-0 after driving Mitakeumi (2-2) over the straw with a relentless pushing and thrusting attack.

Sekiwake Takanosho improved to 3-1 by slapping down No. 1 Hokutofuji (1-3). The maegashira opened with a hard charge, but Takanosho held his ground before slinging Hokutofuji to the clay.

Komusubi Takayasu (2-2) continued his recent dominance over fellow former ozeki Terunofuji (2-2), yanking the sekiwake off balance and slapping him from the dohyo.

The three ozeki are headlining the tournament in the absence of both grand champions at Tokyo's Ryogoku Kokugikan, where admission has been capped at 5,000 per day to limit the risk of coronavirus infection.

Yokozuna Hakuho is one of 65 wrestlers, including 15 from the top two divisions, who have withdrawn from the tourney because of the coronavirus. The all-time great tested positive for the virus just days out from the meet.

The other Mongolian-born yokozuna, Kakuryu, is out with a lower back injury.