But he was not the only ozeki to suffer an upset, with all three wrestlers at sumo's second-highest rank losing on Day 3 at Ryogoku Kokugikan. 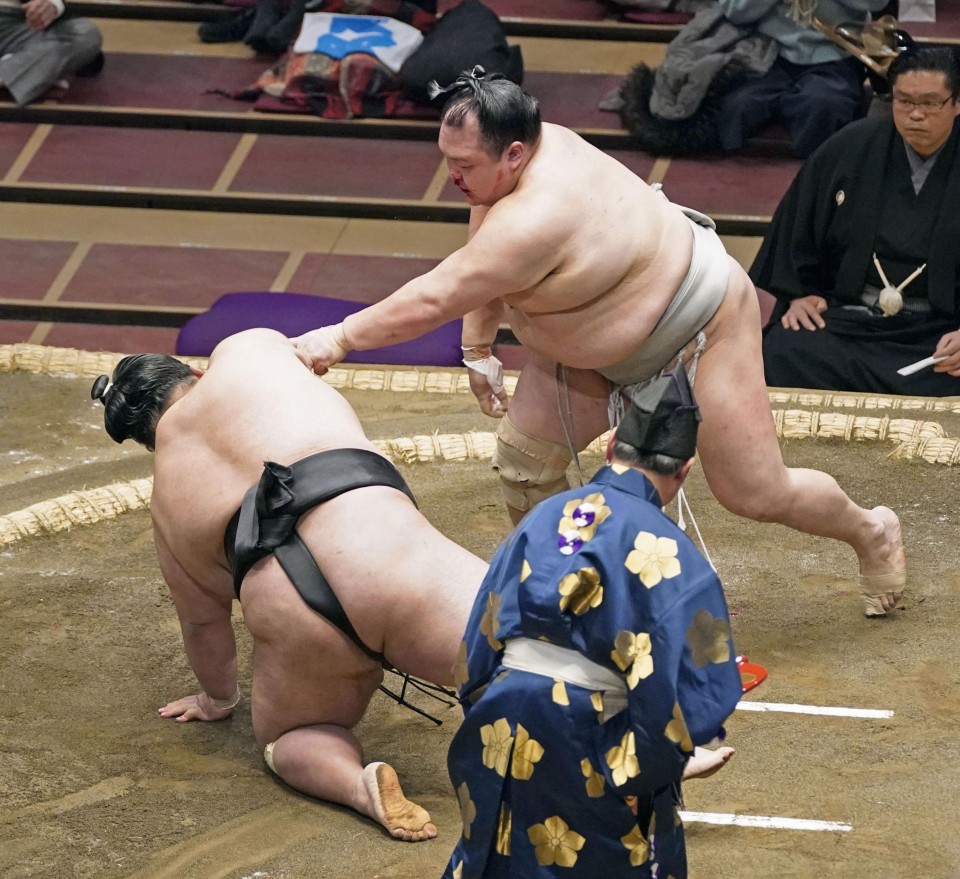 Asanoyama continued his lackluster start, dropping to 1-2 after being beaten by komusubi Mitakeumi (2-1), while Shodai took his first loss against red-hot No. 1 maegashira Daieisho (3-0), who has now defeated all three ozeki at the 15-day meet.

Both Shodai and Asanoyama are competing as demotion-threatened "kadoban" ozeki and need winning records here to stay at the rank.

In the day's penultimate bout, Takakeisho had the early momentum but could not finish off No. 1 maegashira Hokutofuji (1-2) with his initial charge.

The pair traded blows around the ring before Hokutofuji, blood streaming from his nose, thrusted the winded ozeki down.

"I went all out in the match, so it's a good thing I won. I just told myself I had to be patient and I would get the win," Hokutofuji said.

Having come into the tournament looking to earn promotion to sumo's top rank of yokozuna, the 24-year-old Takakeisho will now almost certainly face a longer wait.

In the day's final bout, former sekiwake Mitakeumi (2-1) never looked in doubt, driving an out-of-sorts Asanoyama straight from the ring.

"I just concentrated on my own performance, and things worked out today," Mitakeumi said.

Former sekiwake Daieisho opened with a hard hit to Shodai's chest and maintained his momentum to thrust the ozeki out backwards.

"I concentrated on my opening charge and the results were good. I just wanted to fight my own style, using my pushing technique," Daieisho said.

The three ozeki are the highest-ranked wrestlers in the absence of both grand champions at Tokyo's Ryogoku Kokugikan, where the tournament is taking place during a state of emergency for the capital and three neighboring prefectures following a spike in coronavirus infections.

Yokozuna Hakuho is one of 65 wrestlers, including 16 from the top two divisions, who have been sidelined because of the virus. The all-time championship record-holder tested positive for the virus in the lead-up to the tournament.

The other Mongolian-born grand champion, Kakuryu, is out with a back injury. Both yokozuna received a warning from the Sumo Association prior to the tournament about their repeated absences.

In other Day 3 results, sekiwake Terunofuji advanced to 2-1 with an easy victory against No. 4 Tochinoshin (1-2).

No. 3 Onosho improved to 3-0 by beating Takanosho (2-1), his second straight sekiwake victim following Terunofuji on Day 2.