Fellow ozeki Asanoyama (1-1) bounced back from an opening-day defeat, while the other ozeki, Shodai, worked hard to stay perfect on Day 2 at Tokyo's Ryogoku Kokugikan, where entry has been capped at 5,000 spectators to limit the spread of the coronavirus. 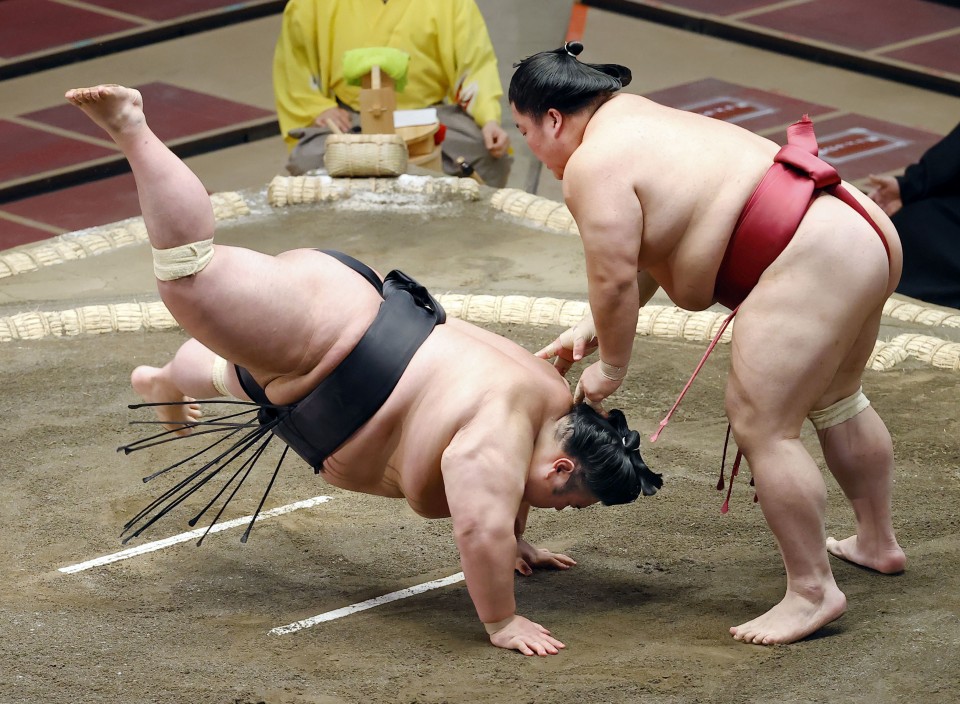 Takakeisho delivered a hard opening hit, but No. 1 maegashira Daieisho (2-0) held his ground and responded with a thrusting attack before slapping the November tournament winner to the clay.

The 24-year-old ozeki's underwhelming start to the 15-day tournament may have jeopardized his bid for promotion to sumo's highest rank of yokozuna.

Former sekiwake Daieisho, meanwhile, continued to make a strong case for promotion back to the three elite "sanyaku" ranks below yokozuna following his opening-day victory over Asanoyama.

"(Takakeisho) is ranked higher, so I had nothing to lose (and) I was able to attack first," said Daieisho.

Establishing a strong grip at the jump, Asanoyama neutralized Hokutofuji's (0-2) thrusting attack by keeping the No. 1 maegashira close before sending him tumbling with an arm throw.

In the day's final bout, Shodai improved to 2-0 after withstanding a protracted battle against komusubi Takayasu.

Shodai had the momentum from the jump, but former ozeki Takayasu (0-2) rallied back before eventually succumbing to a front crush out.

Both Shodai and Asanoyama are competing as demotion-threatened kadoban ozeki after failing to register winning records at the previous tournament. Both need at least eight victories here to remain at sumo's second-highest rank.

The New Year meet is the first grand tournament to be held during a state of emergency over the novel coronavirus pandemic, with 65 wrestlers, including 16 from the top two divisions, sidelined because of the virus.

They include yokozuna Hakuho, who tested positive for the coronavirus in the lead-up to the meet. The other grand champion, Kakuryu, is out of action with a lower-back injury.

Sekiwake Terunofuji (1-1) took his first loss after being bundled out by an aggressive No. 3 Onosho (2-0).

Onosho hit hard and low from the jump, leaving Terunofuji little chance to take a firm grip and prevent the former komusubi from driving him over the edge.

The 24-year-old Onosho said his previous loss to Terunofuji at the September tourney was on his mind coming into the bout.

"Last time (against him) I got caught, so this time I tried to keep Terunofuji away from my belt by staying low," said Onosho. "Last year I wasn't able to get back to sanyaku. But I want to get back there this year."

Sekiwake Takanosho improved to 2-0 with a routine push-out victory over up-and-coming No. 3 Kotoshoho. The ozeki aspirant stayed on the front foot as he quickly dislodged the backpedaling Kotoshoho (0-2).

Having sensationally beaten Takakeisho on Day 1, komusubi Mitakeumi (1-1) followed up with a lackluster loss by push-out to No. 2 Takarafuji.

Takarafuji (1-1) blocked Mitakeumi's initial attack before moving him off balance and quickly bundling him out.