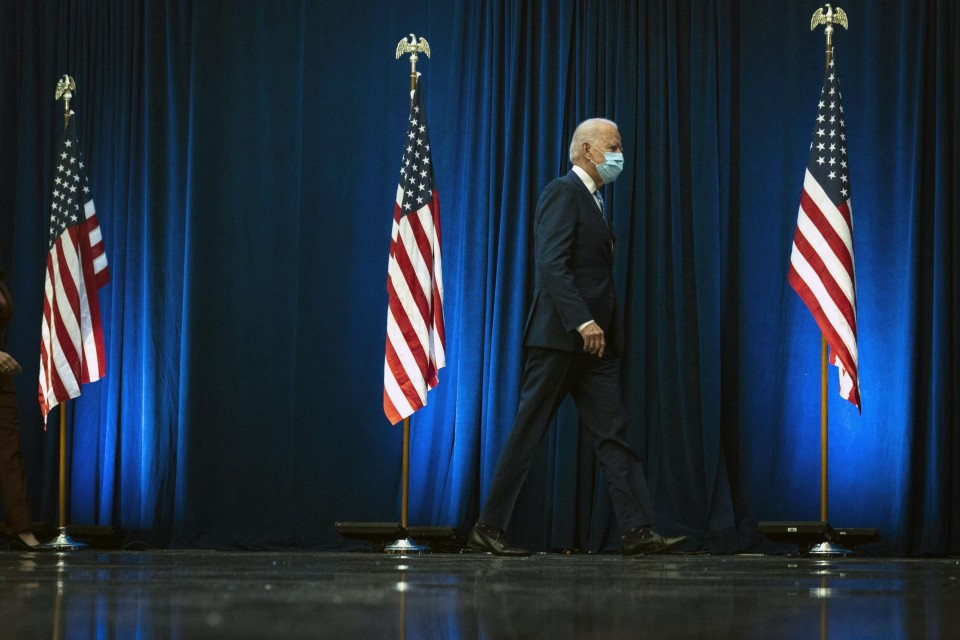 Democratic presidential nominee Joe Biden arrives to speak one day after Americans voted in the presidential election, on Nov. 04, 2020 in Wilmington, Delaware. (Getty/Kyodo)

Democratic presidential nominee Joe Biden edged closer to victory in the race for the White House Thursday, with U.S. media projections showing that he continues to cut into Republican President Donald Trump's lead in some key battleground states.

Facing his rival's advance, Trump sought to undermine election results that are moving against him, tweeting that some states won by Biden will be subject to legal challenges for "voter fraud" and demanding an end to the ongoing counting of mail-in ballots that have proven to be heavily in favor of the Democratic challenger. 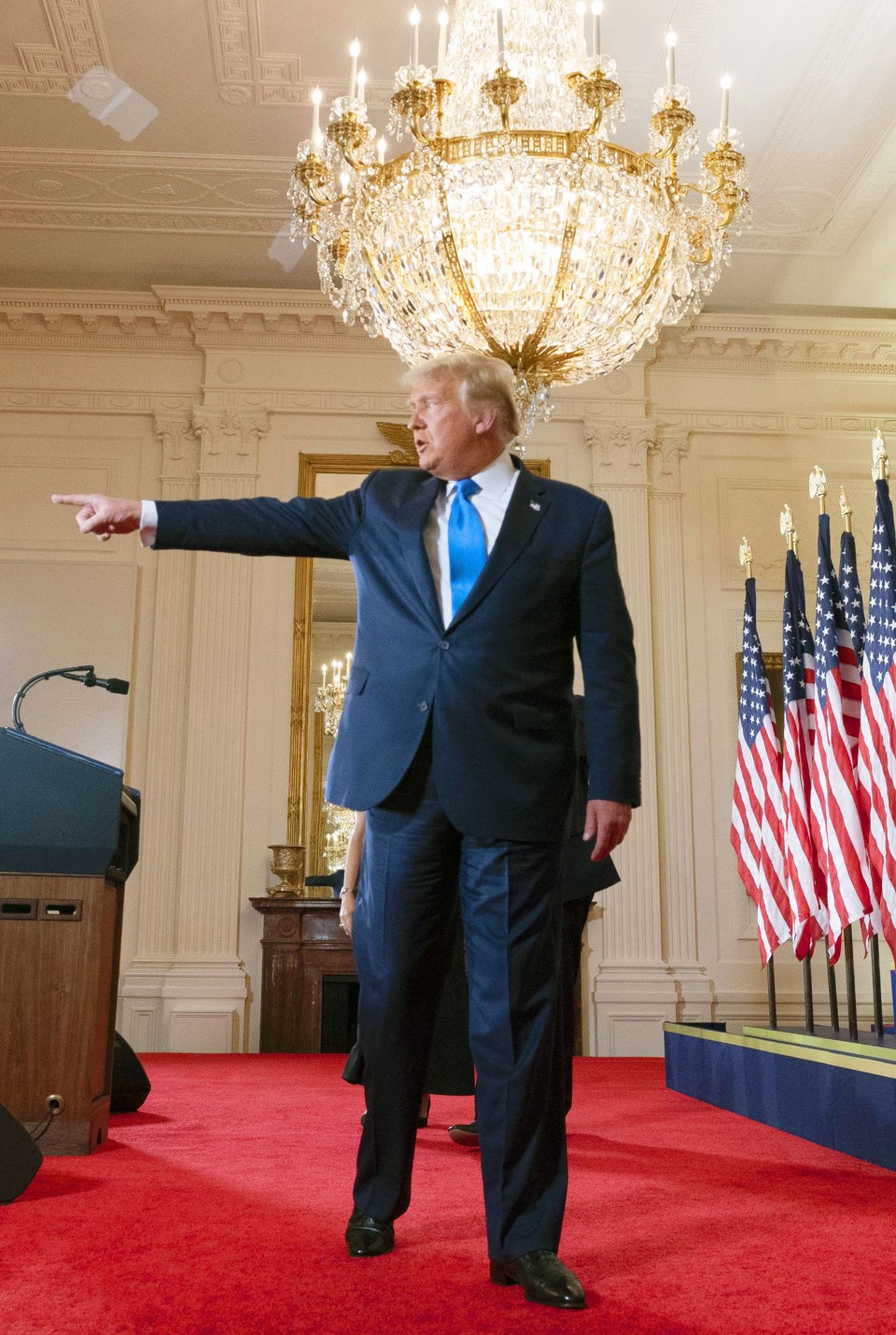 U.S. President Donald Trump departs after making a statement to the nation as his supporters look on in the East Room of the White House in Washington on November 4, 2020. (UPI/Kyodo)

He offered no concrete evidence to back his claims of fraud.

The number of ballots cast by mail, which surged to the tens of millions amid worries about in-person voting during the coronavirus pandemic, has led to a protracted vote counting process, leaving the winner of Tuesday's election still up in the air.

State and federal officials have not reported any instances of widespread voter fraud so far, according to U.S. media.

With tensions growing between each side's supporters over vote counting, Biden, 77, the vice president under Trump's predecessor Barack Obama, called on the public to "stay calm" because every ballot is being counted.

"The process is working. The count is being completed," he said in remarks delivered from his home state of Delaware. "It is the will of the voters, no one -- not anything else -- that chooses the president of the United States of America."

In the race to secure 270 Electoral College votes, Biden has so far secured states worth 253 votes while Trump's wins put him at 213, according to CNN. A few media outlets have projected that the western battleground state of Arizona has gone to Biden, adding 11 more votes to his lead.

As more progress was seen in counting mail-in ballots, Trump's earlier leads in Pennsylvania and Georgia dramatically shrank. Trump cannot afford to lose either state if he is to win re-election.

If Trump's is defeated, he will be the first elected U.S. president to lose a re-election bid since George H.W. Bush in 1992, and only the fourth in the past century.

The outcome of Tuesday's election will likely have a significant impact on Japan and other parts of the world as Trump's "America First" foreign and trade policies have undermined alliances, multilateralism and international organizations.

A losing presidential candidate typically concedes shortly after the outcome is known. But in the run-up to the election, Trump refused to commit to a peaceful transfer of power if he is defeated and has repeatedly questioned the legitimacy of mail-in balloting, which he insists leads to voter fraud.

Early Wednesday, Trump unilaterally declared victory and doubled down on his arguments that mail-in ballots received after election day, a practice allowed in some states as long as they bear an election day or earlier postmark, should not be counted.

In a desperate attempt to turn the tide, the Trump campaign has also requested a recount in the Midwest state of Wisconsin, which Biden was projected to win by a razor-thin margin, citing "irregularities" in several counties.

It has also filed lawsuits in Pennsylvania and Michigan to stop vote-counting, alleging it was not given proper access to observe the count. Legal action was launched in Georgia as well.

But judges in Michigan and Georgia quickly dismissed the cases on Thursday, according to U.S. media.

Trump won the 2016 election largely because he carried states in the declining industrial area known as the "Rust Belt," including the states of Michigan, Pennsylvania and Wisconsin. He appealed to white working-class voters by speaking to their disaffection with globalization and free trade deals.

During the 2020 election campaign, the businessman-turned-president said he has ended "the long nightmare of American economic surrender" with steps such as revamping or leaving what he views as job-killing trade deals and by standing up to China, where he says U.S. jobs have been shipped.

Biden, a self-styled champion of the middle class born in the blue-collar city of Scranton in Pennsylvania, has criticized Trump's economic measures, like tax breaks, as having mostly benefited the wealthy, and has vowed to rebuild the middle class with measures such as raising the minimum wage.

Trump wins key battleground, but race with Biden too early to call