Biden, the 77-year-old former vice president, is leading 74-year-old Trump by 6.7 percentage points, according to an average of national polling data by Real Clear Politics as of Monday. But in the top six battleground states, including Florida and Pennsylvania, the lead has narrowed to an average of 2.7 points. 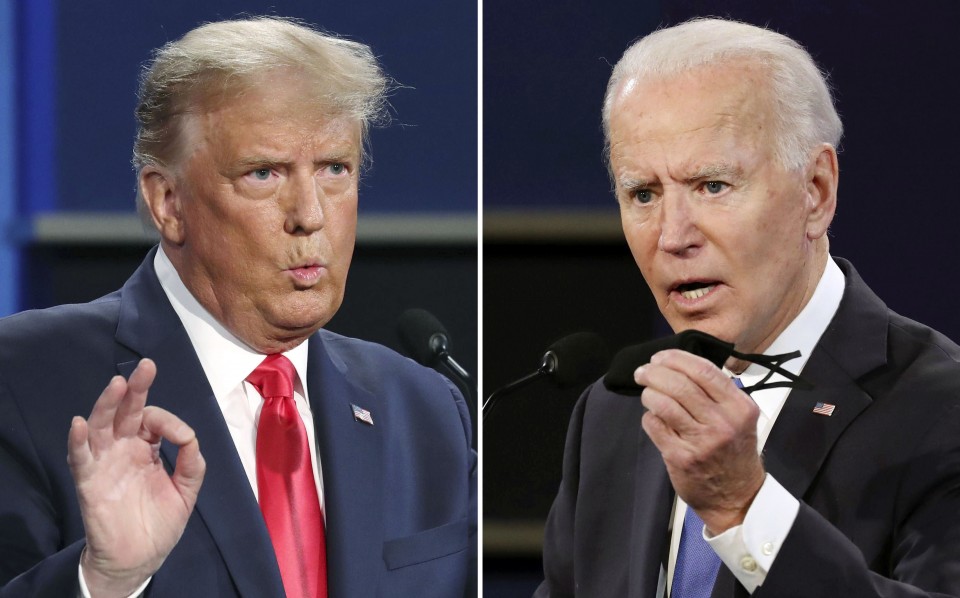 The election is taking place in a year plagued by the novel coronavirus pandemic and its impact on the economy as well as when there has been a flare-up of civil unrest over police brutality against the black community.

Over 97 million voters, or 71 percent of the total turnout in the previous election, have already cast their ballots by mail or in-person, according to early-vote statistics website U.S. Elections Project, signaling high public interest in the race and a widespread desire to avoid crowded polling places amid the pandemic.

The handling of the virus outbreak remains at the forefront of campaign issues, with daily cases hitting a new record high of 99,321 on Friday, according to Johns Hopkins University.

In a last-minute effort to motivate his support base, Trump has continued his whirlwind schedule of rallies in battleground states that are crucial for his re-election, packing outdoor venues with massive crowds despite concerns about a lack of social distancing and mask wearing.

In a rally in Pennsylvania on Monday, he maintained that a coronavirus vaccine will come "very shortly" under his administration while making apparently baseless claims that Biden is "promising to delay the vaccine and turn America into a prison state" by imposing a lockdown.

He also criticized Biden as a "globalist" who spent nearly half-century of his political career outsourcing U.S. jobs to other countries by supporting what the incumbent views as terrible free trade deals.

Trump won the 2016 election largely because he carried states in the declining industrial area known as the "Rust Belt," such as Michigan, Pennsylvania and Wisconsin. He appealed to white working-class voters by speaking to their disaffection with globalization and free trade deals.

Polls show that Biden leads Trump in the two Midwest states of Michigan and Wisconsin by an average 5.1 points and 6.6 points, respectively, and by a smaller margin in Pennsylvania, according to Real Clear Politics. In Florida, the former vice president's edge is at around 1.7 points.

To win the presidency, Trump or Biden need to secure at least 270 of the 538 Electoral College votes allocated to the 50 states and the District of Columbia. The candidate who wins the popular vote in a state secures that state's electoral votes, usually in a winner-take-all manner.

Biden, who delivered speeches in Ohio and Pennsylvania on Monday, accused Trump of failing to take sufficient actions to contain the COVID-19 pandemic and sought to highlight his concrete plans to create jobs and rebuild the economy.

He also said he will raise taxes on big corporations and the wealthy to make them pay their "fair share," while pledging a $2 trillion investment to upgrade the country's infrastructure.

Meanwhile, concerns are growing over a possible delay in vote counting due to the huge number of mail-in ballots. There are also worries that possible large-scale protests and violence by fringe groups could cause disruption in the wake of the election.

A losing presidential candidate typically concedes shortly after the outcome is known. However, Trump has refused to commit to a peaceful transfer of power if he is defeated, and has also insisted that the only way he could lose the election would be because it is "rigged" by mail-in voting, which he claims is rife with voter fraud.

Online news outlet Axios reported Sunday that Trump has told confidants he will declare victory on Tuesday night if it looks like he is "ahead," citing three sources familiar with his private comments.

The plan is allegedly being contemplated amid speculation that Trump may appear ahead in Pennsylvania on election night before the counting of mail-in ballots is completed. Those votes, tallied over the following days and expected to favor Biden, could swing the state's final outcome.

Trump's team is preparing to "claim baselessly that if that process changes the outcome in Pennsylvania from the picture on election night, then Democrats would have 'stolen' the election," Axios said.

Surveys show Democrat voters have a greater preference than Republican supporters for casting their ballots by mail.

But Trump's team believes that the president will still need to either win or have commanding leads in many of the other battleground states -- Arizona, Florida, Georgia, Iowa, North Carolina, Ohio and Texas -- to make such a "premature victory" declaration, according to Axios.

Trump told reporters on Sunday that the story is a "false report," but expressed his discontent about mail-in ballots accepted after Tuesday in key battleground states such as Pennsylvania but postmarked no later than election day.

"As soon as that election is over, we're going in with our lawyers," he said, without elaborating.