Trump wins key battleground, but race with Biden too early to call

U.S. President Donald Trump captured the key battleground state of Florida in Tuesday's election while claiming to be the winner of the extremely tight race with Democratic challenger Joe Biden despite millions of votes yet to be counted.

According to U.S. media, the 74-year-old Republican incumbent has captured more than 20 states, including Florida and Ohio that were seen as crucial to his re-election. Biden, a 77-year-old former vice president, has taken more than 15 states, including California, New York and the District of Columbia.

In the race to secure 270 Electoral College votes, Trump has so far won 213 and Biden 224, according to CNN. Battleground states that remain too close to call include Arizona, Michigan, Pennsylvania and Wisconsin.

As the coronavirus pandemic continues to rage on, Americans, wearing masks, were seen lining up outside polling stations to cast their ballots on Tuesday, adding to the unprecedented level of over 100 million early votes that were cast by mail and in-person, in what is expected to be an election with a record overall turnout.

Biden, who entered election day with a stable lead over Trump in national polls, called for patience until a clear winner could be determined in televised remarks after midnight.

"We knew, because of the unprecedented early vote and the mail-in vote, it was going to take a while," he said. "We're going to have to be patient until the hard work of tallying the votes is finished."

But he also said he believes he is "on track to win this election," noting that he is confident that he has flipped Arizona, a battleground state that voted for Trump in the previous election in 2016, and "feeling really good" about the Midwest states of Michigan and Wisconsin.

More than an hour after that, Trump unilaterally declared victory at the White House.

"Frankly, we did win this election," Trump said, insisting that he is winning Pennsylvania and some other states still considered too close to call.

Concerns have been lingering that Trump may prematurely declare victory without waiting for the completion of mail-in ballot counting.

In the run-up to the election, he has refused to commit to a peaceful transfer of power if he is defeated and has repeatedly questioned the legitimacy of mail-in balloting, which he insists will lead to voter fraud.

In contrast to Trump's Republican base, whose turnout in large numbers for in-person voting on election day had been expected, Democratic voters were considered more likely to avoid crowded polling places and cast their ballots by mail prior to election day as a safety measure amid the ongoing pandemic.

"This is a major fraud on our nation," Trump said in the early hours of Wednesday, suggesting that he will take legal action against votes counted past election night.

The election has become a de facto referendum on Trump's first term, which has been overshadowed this year by the novel coronavirus outbreak, its impact on the economy and a flare-up of civil unrest over accusations of police brutality against black citizens.

Trump, a real estate developer-turned-reality TV star who had never held public office before, was sworn in as president in 2017 following a stunning victory over former Secretary of State Hillary Clinton in the 2016 election. 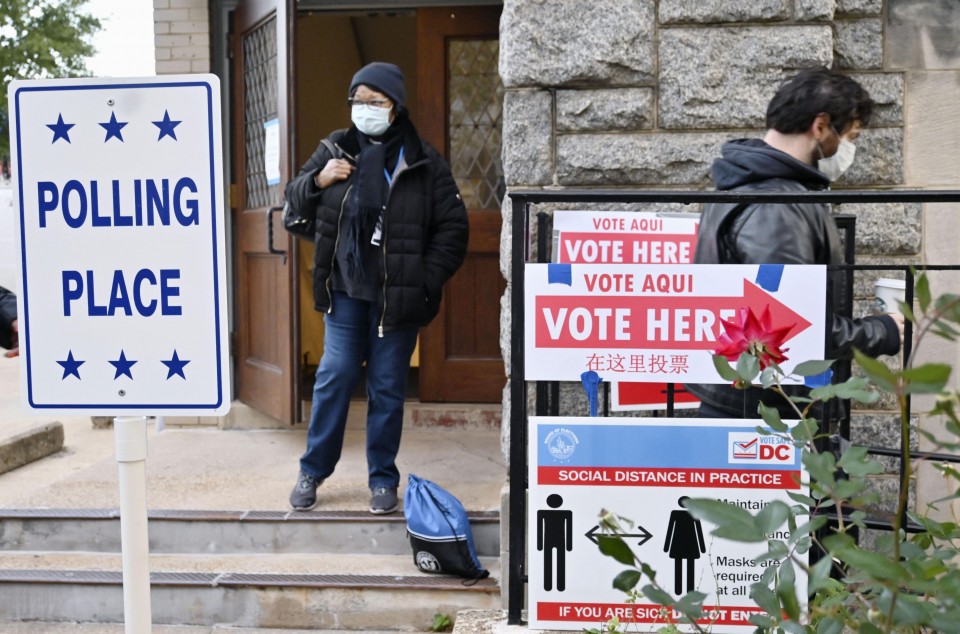 Over the past four years, Trump has proved himself to be an unpredictable leader who flouts diplomatic and political norms while fueling division among the public with his controversial tweets and remarks on racism, immigration and protests.

His behavior has been criticized as erratic and provocative, often resulting in diplomatic friction, including with some of the United States' closest allies.

Under his "America First" policy, Trump pulled the country out of international agreements, implemented protectionist trade measures and pressured allies in Asia for not paying enough of the costs associated with hosting U.S. troops in their countries.

Biden, whose political career spans nearly half a century, including his two vice-presidential terms under Barack Obama, has been seen as a steady hand who would bring what some experts call "normalcy" back to the White House.

Slamming Trump's failed leadership over the pandemic, which has cost the lives of more than 230,000 people and millions of jobs in the country, the former vice president has emphasized that he has concrete plans to bring the outbreak under control.

He also plans to invest heavily in a clean-energy economy to tackle climate change and create jobs.

On the diplomatic front, Biden has pledged to reverse some of Trump's major policy decisions, including the country's withdrawal from the Paris climate accord and the World Health Organization.

He is also seeking to strengthen alliances with countries including Japan and South Korea and to work with allies and partners to address China's alleged unfair trade practices and other behavior deemed as going against international rules.

To win the presidency, either of the candidates needs to secure at least 270 of the 538 Electoral College votes allocated to the 50 states and the District of Columbia. The candidate who wins the popular vote in a state captures that state's electoral votes, usually in a winner-take-all manner.

A losing presidential candidate typically concedes shortly after the outcome is known.