Joe Biden has gained an edge over President Donald Trump in the extremely tight race for the White House, with U.S. media projecting Wednesday that the Democratic challenger has picked up two crucial Midwest states won in 2016 by the Republican incumbent.

Biden's narrow wins in Wisconsin and Michigan became clear as more results from mail-in ballots, which have surged amid the coronavirus pandemic, have come in. The Trump campaign has requested a recount of the Wisconsin result and mounted legal challenges to halt counting in other battleground states, including Michigan. 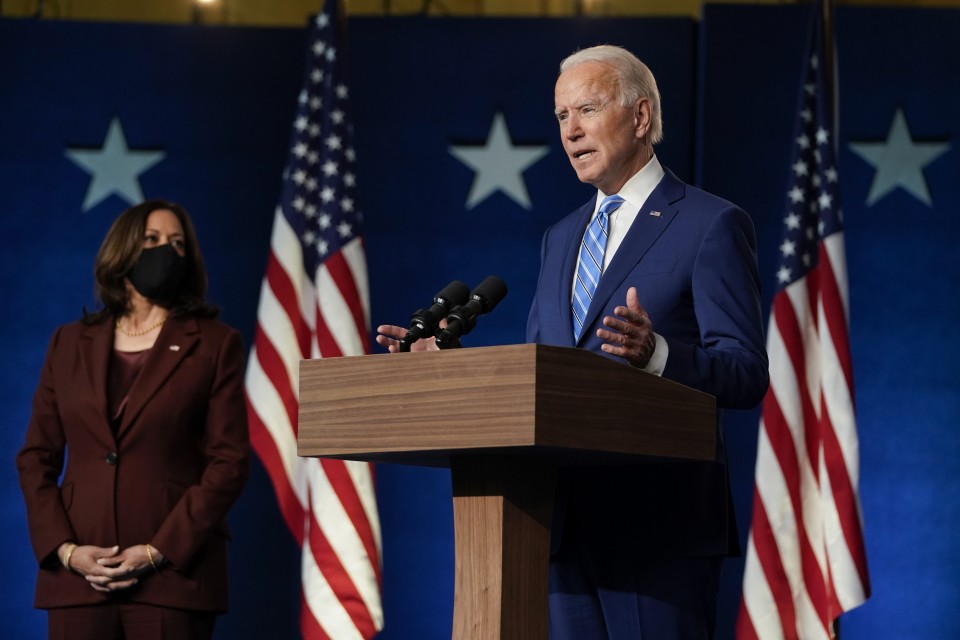 As the Trump team appeared to be stepping up efforts to question the legitimacy of late-arriving mail-in votes as well as challenge vote-counting processes, Biden, the 77-year-old former vice president, expressed confidence that he will eventually emerge the winner.

"I'm not here to declare that we've won, but I am here to report that when the count is finished, we believe we will be the winners," Biden said.

In the race to secure 270 Electoral College votes, Biden is so far projected to win states that control 253 electoral votes and Trump 213, according to CNN. Only a handful of battleground states such as Arizona, Georgia, Nevada and Pennsylvania remain too close to call.

In the early hours of Wednesday, Trump, 74, unilaterally declared a "win" and suggested that mail-in ballots received after election day, which is allowed in some states such as Pennsylvania, should not be counted.

In contrast to Trump's Republican base, whose turnout in large numbers for in-person voting on election day had been expected, Democratic voters were considered more likely to cast their ballots by mail rather than going to crowded polling places amid the pandemic.

The Trump campaign later said it requested a recount of the ballots in Wisconsin, claiming there have been reports of "irregularities" in several counties which "raise serious doubts about the validity of the results."

According to Wisconsin recount law, a candidate can request a recount if the margin separating the two candidates is less than 1 percent. U.S. media said unofficial tallies on Wednesday showed that Biden was leading Trump by about 0.6 percentage point in the state.

The Trump campaign also said in a statement that it has filed a lawsuit with a Michigan court to halt vote counting, saying that it has "not been provided with meaningful access to numerous counting locations to observe the opening of ballots and the counting process, as guaranteed by Michigan law."

Both Michigan and Wisconsin, which are known as part of the declining industrial area known as the "Rust Belt," were states that helped deliver Trump the presidency in the 2016 election. The president appealed to white working-class voters by speaking to their disaffection with globalization and free trade deals.

In 2012, the two states had voted for then Democratic President Barack Obama who was seeking a second term. Biden served as Obama's vice president for eight years from January 2009.

Tuesday's presidential election has become a de facto referendum on Trump's first term, which has been overshadowed this year by the coronavirus pandemic and its impact on the economy as well as by a flare-up of civil unrest over accusations of police brutality against black citizens.

A change of occupancy in the White House could have a significant impact on Japan and other parts of the world, with Trump's "America First" foreign and trade policies seen as having undermined alliances, multilateralism and international organizations.

An unprecedented level of some 101 million voters, which is equal to 73.4 percent of the entire voter turnout for the 2016 election, cast their ballots early by mail or in-person, according to U.S. Elections Project, signaling high public interest in the race and desire to avoid the risks of contracting the novel coronavirus in crowds on election day itself.

Biden, meanwhile, has won the most votes out of any candidate in history, notching over 70 million votes nationwide as of Wednesday afternoon, U.S. media said, citing a tally by The Associated Press.

The previous record was held by Obama, who garnered about 69.5 million votes in the 2008 election.