Families of Japanese nationals abducted by North Korea urged Prime Minister Yoshihide Suga on Tuesday to realize the return of their loved ones.

"We have not seen our children for decades. Our days of suffering continue," said Sakie Yokota, 84, whose daughter Megumi was abducted at the age of 13 in 1977.

Suga, who took office on Sept. 16, said his new government will do all they can to bring the victims back, a stance inherited from the previous administration under Shinzo Abe. 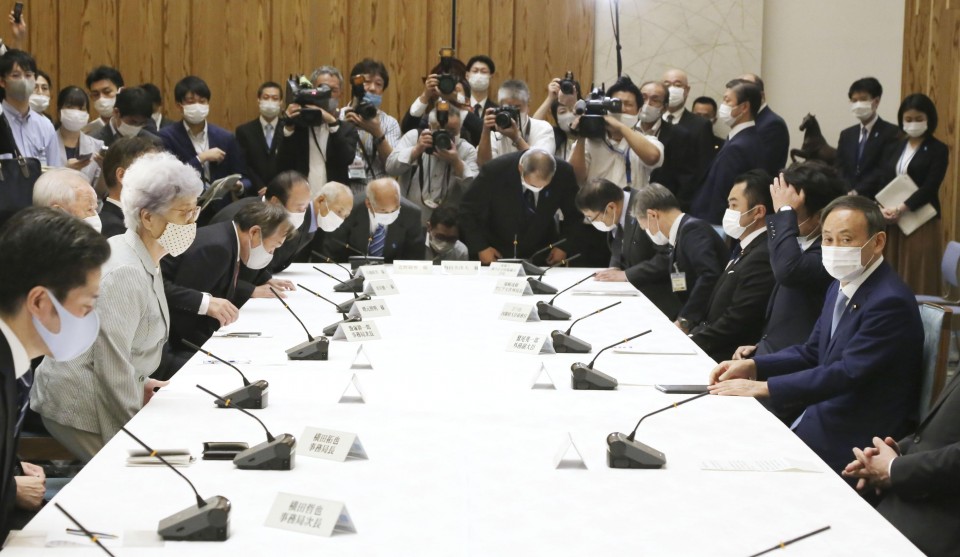 Japanese Prime Minister Yoshihide Suga (far R) meets the families of victims of North Korean abductions, including Sakie Yokota (2nd from L), whose daughter Megumi was abducted at the age of 13 in 1977, at the prime minister's office in Tokyo on Sept. 29, 2020. (Kyodo)

"I am determined not to miss a single opportunity and find my way in realizing the return of all abduction victims as soon as possible," he said after the meeting at the prime minister's office.

Among the others in attendance was Shigeo Iizuka, who heads a group of the victims' families. The 82-year-old's sister Yaeko Taguchi was abducted in 1978.

"We have not seen results in the past seven years and eight months, so I would like to pay closer attention" to developments, said Iizuka at a press conference after the meeting.

After taking over from Abe, the new prime minister has persistently asked for other countries' cooperation in resolving the issue, and in his first U.N. General Assembly address last week Suga said he is ready to meet with North Korean leader Kim Jong Un without preconditions.

Yokota's husband Shigeru, a central figure in efforts to bring back the abductees, died at the age of 87 in June without ever seeing Megumi after her disappearance.

Japan officially lists 17 people as having been abducted by North Korea with five already repatriated in 2002. But Pyongyang maintains that the abduction issue has already been resolved, saying eight died, including Yokota's daughter, and that the other four never entered the country.