The race to succeed Prime Minister Shinzo Abe entered the home stretch on Saturday as the front-runner, Chief Cabinet Secretary Yoshihide Suga, vowed to guard the economy from the brunt of the coronavirus pandemic.

In a televised debate with his rivals, former Defense Minister Shigeru Ishiba and former Foreign Minister Fumio Kishida, Suga said he would use "any means" including an additional economic package to keep businesses going and protect jobs.

The ruling Liberal Democratic Party holds an election to choose its new leader on Monday, with the winner set to be chosen as prime minister in an extraordinary Diet session on Wednesday.

Suga vowed to push forward with "Abenomics," the outgoing prime minister's signature policy mix of drastic monetary easing, fiscal stimulus and structural reforms, which Suga said had succeeded in creating millions of jobs across the country. 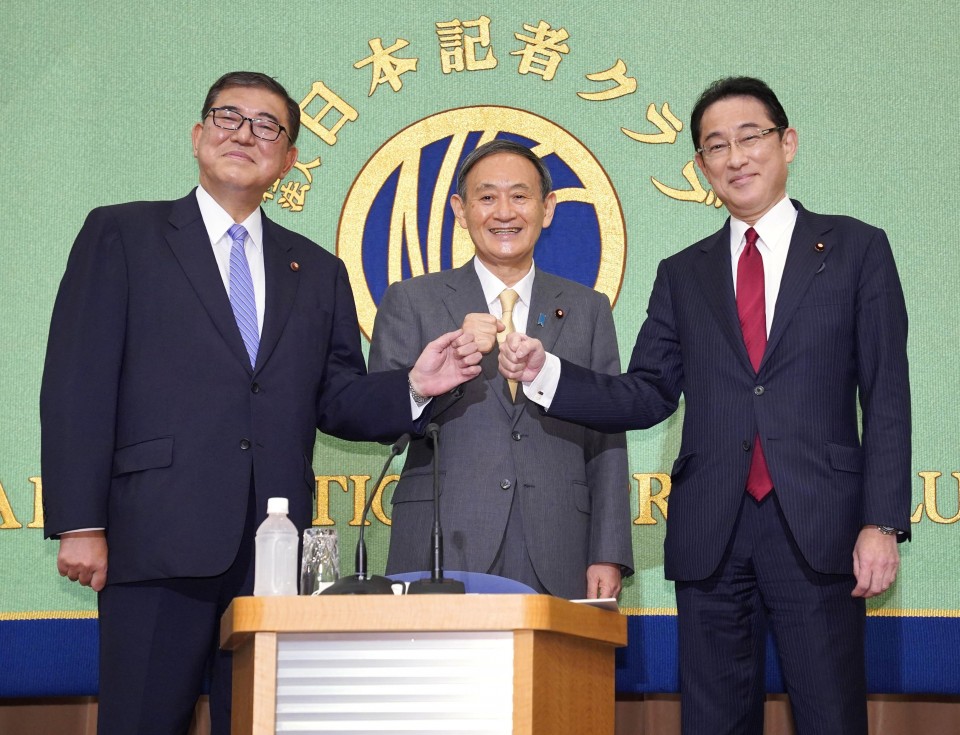 The other contenders argued in the debate hosted by the Japan National Press Club in Tokyo that more needs to be done to put the world's third-largest economy on a growth track.

Kishida acknowledged the merits of Abenomics, but said the benefits had yet to trickle down to the middle class and called for more efforts to raise base wages, including tax cuts for firms that do so.

"We have to tackle the various forms of disparity that have arisen and create a sense of solidarity among the people," he said.

Ishiba, who has been a rare critic of Abe within the LDP, called for more steps to empower women and boost regional economies, while pushing for a legal revision that would enable the government to impose a hard lockdown if the coronavirus begins rapidly spreading again.

While Suga said "an explosive rise in infections the likes of which have happened in America and Europe needs to be avoided at any cost," he added the legal revision should not be rushed due to concerns over restricting freedom.

On foreign policy, Ishiba reiterated his view that Asian nations should create their own version of the North Atlantic Treaty Organization to deepen security cooperation and create a "network of countries that share common values such as freedom and rule of law."

Suga warned such a move would alienate China, saying "an Asian NATO would risk dividing the region between allies and enemies. I think it's important we continue to pursue a free and open Indo-Pacific with the Japan-U.S. alliance remaining the focus of our foreign policy."

Kishida, meanwhile, said Japan should pivot toward multilateralism and play a more active role in issues such as environmental protection and nuclear disarmament.

Days after breaking the record as the prime minister with the most consecutive days in office, Abe abruptly announced in late August he was resigning to receive treatment for a chronic bowel disease that had left him fatigued and doubtful of his ability to fulfill his mandate.

The disease, ulcerative colitis, had also caused him to step down in 2007, kicking off a period of turmoil in Japanese politics that saw six prime ministers in as many years.

Under normal circumstances, the LDP presidential election is held with the party's lawmakers and rank-and-file members holding an equal number of votes.

Due to Abe's resignation in the middle of his term and amidst the coronavirus pandemic, however, an abridged version of the election will be held Monday with greater weight being given to lawmakers.

Suga, Abe's close aide and the top government spokesman, has a comfortable lead on his rivals, having secured the support of five of the seven major LDP factions and a significant share of unaffiliated lawmakers.