The other candidates, former Foreign Minister Fumio Kishida and former Defense Minister Shigeru Ishiba, are in a close race for second place in the election to be held Monday following Abe's abrupt announcement in late August of his resignation for health reasons.

The winner is all but certain to be named the next prime minister at an extraordinary Diet session on Sept. 16 given the LDP's dominance of parliament. 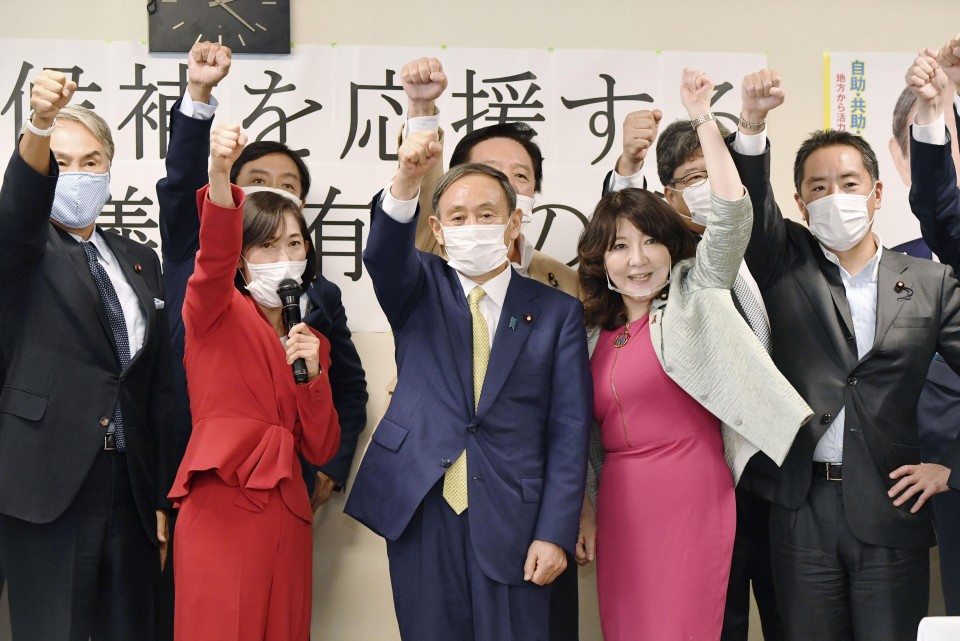 According to the survey, among 394 LDP lawmakers, 304, or 77 percent, plan to vote for Suga, who has served as Abe's right-hand man for nearly eight years and vowed to continue with the premier's foreign and economic policies.

Suga has secured support from five of the party's seven major factions with a combined over 250 members as well as 48 of 64 unaffiliated lawmakers.

Ishiba, however, is popular among rank-and-file members and could receive more votes from the LDP's local chapters in the country's 47 prefectures, which hold three votes each or a total of 141 votes.

Among the chapters, 44 plan to hold primaries to determine how to cast their votes, with 34 using proportional representation as opposed to the winner-take-all method.

Suga, 71, is expected to receive at least one or two votes from most chapters, putting him on course to gather around 70 percent of the total of 535 votes up for grabs.

Abe, the country's longest-serving prime minister who started his second tenure in 2012, said he is stepping down to receive treatment for a chronic bowel disease that also ended his first stint in power from 2006 to 2007.

Under normal circumstances, the LDP president would be chosen with Diet members belonging to the party and rank-and-file members holding an equal number of votes.

But his resignation before the end of his term in September 2021 and in the midst of the coronavirus pandemic has triggered an abridged election that places greater weight on lawmakers.

Suga was also the most popular choice among the public to be Japan's next prime minister, with the backing of 50.2 percent of those polled, a separate Kyodo News nationwide telephone poll showed.

Support for Ishiba stood at 30.9 percent, with Kishida at 8.0 percent.

On Wednesday, the three candidates held their first debate ahead of the election, arguing who can best transform Japan into a more inclusive society.

All three said steps were necessary to support women at work and home, and to make it easier for them to enter politics.

Low female representation in parliament was one of the primary reasons Japan ranked 121st among 153 countries in the World Economic Forum's gender gap rankings last year. Of the 20 members of Abe's Cabinet, just three are women.

Suga said women with young children have "virtually no opportunities" to pursue political ambitions due to a dearth of child care options, vowing to expand capacity at nursery facilities as a remedy.

Kishida, 63, said Japanese politics remains a "man's world" and that setting numerical targets for female participation could be one way to change the situation, while Ishiba, 63, said the time-consuming nature of a career in politics made it crucial for husbands to provide support, including by doing more around the house.

Women's empowerment was one of the main focuses when Abe returned to power, with their participation in the workforce hoped to help offset the country's shrinking labor force amid a graying society.

But eight years on, women hold only 15 percent of leadership positions in the public and private sectors, well short of the government's target of reaching 30 percent by 2020.