A superb second-half strike from Andres Iniesta gave Vissel Kobe their third straight win in the J-League first division on Wednesday as they edged Nagoya Grampus 1-0 at home.

Last season's Emperor's Cup winners made the breakthrough on the hour, a slick exchange of passes involving four players including the former Barcelona and Spain star leading to the deserved win at Noevir Stadium.

Kyogo Furuhashi began the move on the left, playing the ball forward for Brazilian striker Douglas to off for Iniesta, who quickly played a one-two with Yuta Goke before hitting a well-placed half volley in the bottom left corner from outside the box.

"It was a great effort from the team to win the points and I could help with a goal as well," Iniesta said. "We've stopped the bad run of form, and we have to make use of these moments and continue to improve as a team." 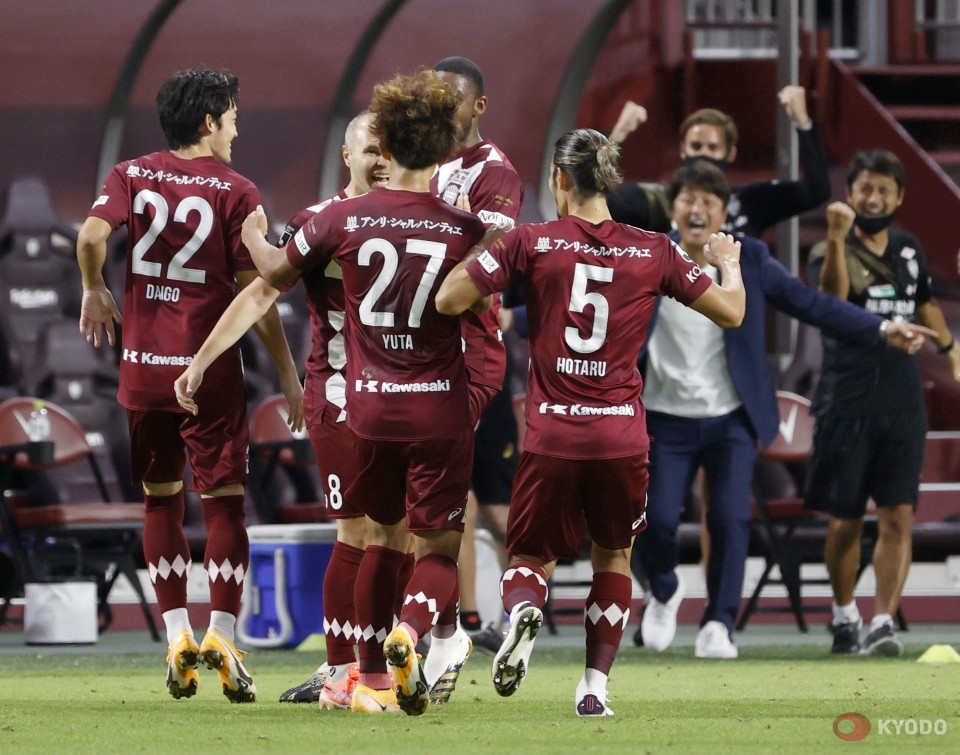 Andres Iniesta (2nd from L) celebrates with his Vissel Kobe teammates after scoring what proved to be the winner in a 1-0 defeat of visiting Nagoya Grampus. (Kyodo)

After thrashing Consadole Sapporo 4-0 on Saturday in their first match under former midfielder and Japan international Atsuhiro Miura, Kobe had plenty of the ball throughout as they looked to avenge their 2-1 away defeat away to Grampus 11 days before.

Iniesta carved out the first chance of the match in the 13th minute as he floated a high ball into the box which Douglas met with an audacious volley, only to see his effort hit the crossbar with keeper Mitch Langerak stranded.

Big-spending Kobe had a chance to score a second in the 83rd minute when Douglas found strike partner Furuhashi with a through ball into the box only for his low effort to be denied by Langerak.

"We had high quality players to begin with and we've succeeded in changing their mindsets," Miura said of their second straight clean sheet. "Iniesta is at a different level. He scores when we need him to and other players are starting to link up better too."

Grampus fell to fifth, their last three home wins all followed by defeats away.

Elsewhere in the top flight, Yokohama F Marinos snatched a late 1-1 draw at home to Sagan Tosu after Erik levelled in the 84th minute to move them a point above Grampus and into fourth.

Third-placed FC Tokyo won 1-0 away to Urawa Reds thanks to a first-half goal from Kensuke Nagai.