Chicago Cubs right-hander Yu Darvish became the first Japanese pitcher to lead a major league in wins after his closest competitor in the National League dropped out of contention on Saturday.

Darvish collected his eighth win of the season on Friday after tossing seven shutout innings in the Cubs' 10-0 win over the Chicago White Sox. Zach Davies of the San Diego Padres and Atlanta Braves lefty Max Fried are set to finish the regular season with seven wins.

Darvish is 8-3 with 93 strikeouts and a 2.01 ERA over 12 games in his third season with the Cubs, who clinched their first National League Central title in three years after the second-place St. Louis Cardinals fell 3-0 to the Milwaukee Brewers earlier Saturday.

It is the first time the 34-year-old Darvish has earned the most wins in any league, including the seven seasons he spent in Japan with the Nippon Ham Fighters. 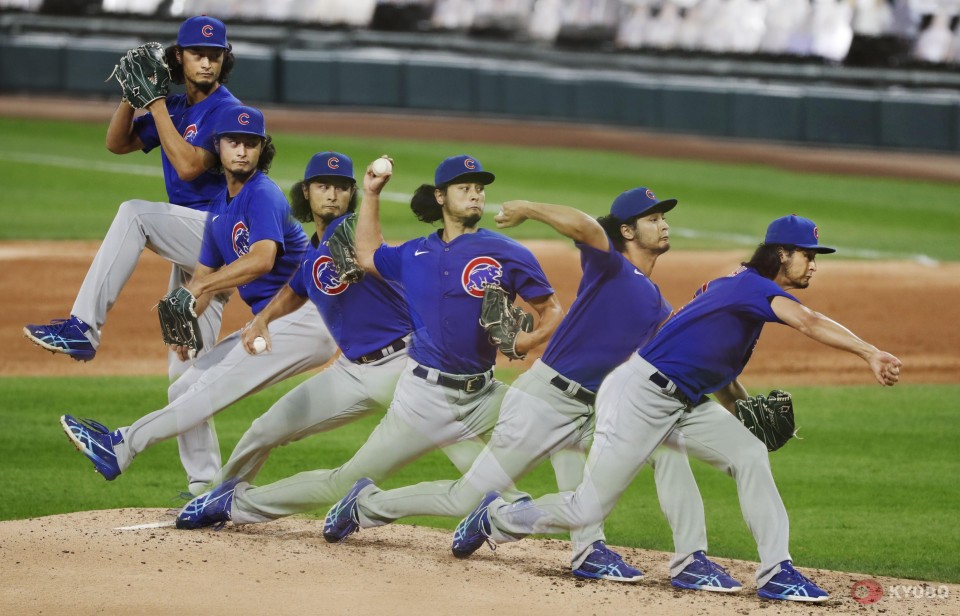 Davies, who is 7-4, pitched three innings on Saturday and did not factor in the decision in the Padres' 6-2 win over the San Francisco Giants.

Fried turned his left ankle in his last start on Wednesday and is poised to finish the regular season at 7-0.

The 2020 Major League Baseball regular season, shortened to 60 games due to the coronavirus pandemic, wraps up on Sunday.

Darvish won seven straight games from July 31 to Sept. 4 and was named National League Pitcher of the Month for July and August. He is currently second in the league in ERA and tied for third in strikeouts.

He is also the first Japanese pitcher to be a leading candidate for the Cy Young Award recognizing the MLB's best pitchers.

While no Japanese pitcher had led a major league in wins before, Hideo Nomo led the National League in strikeouts in 1995 with the Los Angeles Dodgers and the American League in 2001 with the Boston Red Sox.

Darvish led the AL in strikeouts in 2013 with the Texas Rangers.