Shohei Ohtani hit the first of three homers in the second inning as the visiting Los Angeles Angels beat the San Diego Padres 5-2 Wednesday at Petco Park for their third straight victory.

Ohtani's two-run homer off Padres lefty Adrian Morejon (2-2) was his seventh of the season and only hit of the day. The 26-year-old Japanese, who throws right-handed and bats left-handed, flied out, struck out swinging and grounded out in his other at-bats.

"I made good contact with the ball today," Ohtani said.

"When I struck out in my third at-bat I was seeing the ball well. To me it doesn't really matter if the pitcher is right-handed or left-handed. As long as I'm prepared at the plate," he said. 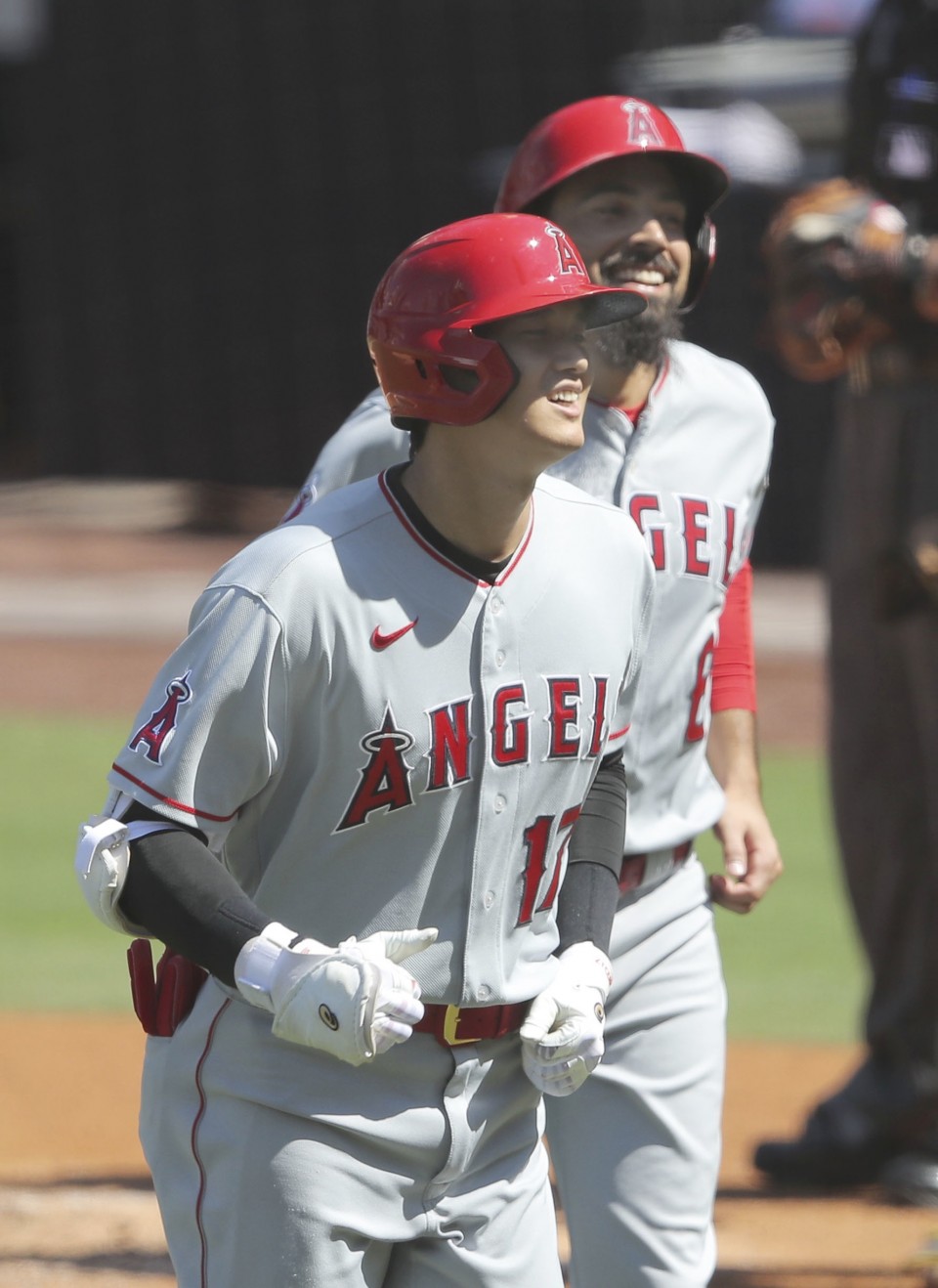 Shohei Ohtani (front) is congratulated by Los Angeles Angels teammate Anthony Rendon after hitting a two-run home run in the second inning of a game against the San Diego Padres on Sept. 23, 2020, in San Diego, California. (Kyodo)

After Ohtani's two-run shot tied the game at 2-2, teammates Justin Upton and Anthony Bemboom also went deep off Morejon, who replaced San Diego starter Mike Clevinger. Clevinger had been dealing with biceps tightness before leaving the game after one inning.

The Angels have won six of seven and remain barely alive in postseason chase with three games left against the Los Angeles Dodgers, following an off day Thursday.

Tanaka (3-3) gave up five runs, three of them earned, while striking out five and walking three to take the loss. One of the eight hits he yielded was a home run to Toronto catcher Danny Jansen, who went 4-for-4 with two solo homers and three RBIs.

After Tanaka's exit, the Yankees bullpen failed to keep a close game, allowing an eight-run explosion in the sixth inning. Blue Jays first baseman Vladimir Guerrero Jr. drove in the first of eight runs on a fielder's choice.

At Target Field in Minneapolis, Minnesota, Kenta Maeda struck out nine of 23 batters he faced and reached 150 career wins, combining his totals from Japan and MLB, as the Minnesota Twins edged the Detroit Tigers 7-6.

"It's not a milestone I was particularly aiming for but in Japan you need 200 wins to be inducted into the Hall of Fame so I want to win 200 games," Maeda said.

"It was my last start (in the regular season) so it means a lot that I got to end on a good note," he said.

Maeda (6-1) retired 10 consecutive Detroit batters at one point, but he surrendered a three-run homer to Miguel Cabrera in the sixth that cut the lead to 6-3. He allowed three runs and four hits in six innings of work.

It got close at the end, as Cabrera hit a three-run home run with two outs in the ninth -- his second of the game -- before Sergio Romo got the final out.

The Twins now are one-half game ahead of the Chicago White Sox for the division title.