Sekiwake Shodai withstood a spirited challenge from rookie Tobizaru at the Autumn Grand Sumo Tournament on Sunday to claim his first top-division championship and a promotion to ozeki.

With grand champions Hakuho and Kakuryu missing the entire 15-day tourney through injury, the 28-year-old Shodai took control of the title race with back-to-back wins over ozeki Takakeisho and Asanoyama on Friday and Saturday, respectively.

The Kumamoto Prefecture native avoided a playoff on the final day at Ryogoku Kokugikan by improving to an unassailable 13-2 in the penultimate bout against No. 14 maegashira Tobizaru, who came in trailing by one win.

The 28-year-old Tobizaru was aiming to become the first wrestler in more than a century to win the Emperor's Cup in his makuuchi debut. His impressive 12-3 performance at the tournament garnered him a Fighting Spirit Prize. 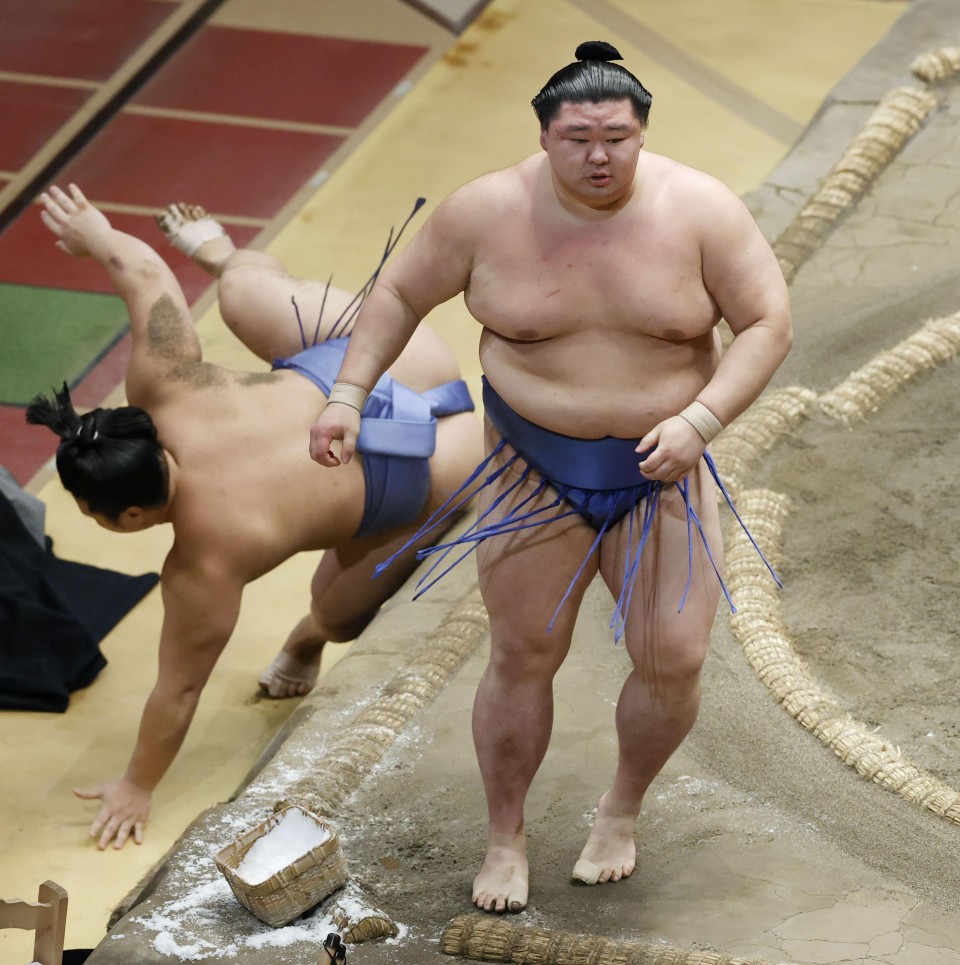 With an improbable championship at stake, Tobizaru took the battle to Shodai, forcing him back to the straw from the opening charge.

Shodai kept his feet on the straw bales and drove the battle back to the middle, but after being forced to the opposite edge of the ring by Tobizaru, he thrusted the maegashira down while just staying inside.

"It was my first time to meet (Tobizaru) and it was actually very difficult for me. I think I may have been the most nervous I've ever been in my sumo career," said Shodai, who was in contention at two previous grand tournaments before fading out late.

"In January and also July I came close but failed. But I think those experiences really helped me win this time."

Along with the Emperor's Cup, Shodai earned his first Outstanding Performance Prize and his sixth Fighting Spirit Prize. But the announcement of an even bigger prize, promotion to sumo's second-highest rank, came later.

"(Ozeki is) definitely something that I aspired to be. I think it's something every rikishi wants," he said prior to the announcement. "The idea that I might achieve that rank is unimaginable."

Tobizaru said the experience was "the most fun I've had in a tournament."

"I really want to continue (winning). I want to make sure people don't think this was just a fluke," he said.

Takakeisho overpowered fellow ozeki Asanoyama in the tournament's final bout to improve to 12-3 and finish one win off the pace.

Opening with his trademark thrusting attack, Takakeisho denied Asanoyama (10-5) the leverage for a throw before pushing him down to the clay.

No. 1 Takanosho (10-5) pushed out No. 7 Aoiyama (7-8) to clinch double-digit wins and ensure promotion to the three elite "sanyaku" ranks below yokozuna for the November grand tournament.

No. 5 Kiribayama (9-4-2) capped off a gritty performance at the tournament by forcing out sekiwake Mitakeumi (9-7).

The 24-year-old Mongolian, who missed three bouts with an injured shoulder, withstood a powerful drive from the sekiwake before lifting him over the straw.

With a winning record at stake, No. 10 Kotoeko (8-7) forced out No. 5 Takarafuji (7-8). The Sadogatake stable grappler ended the tournament with three straight victories to claim his crucial eighth win.