Sekiwake Shodai closed to within one win of a maiden top-division championship by overpowering ozeki Asanoyama at the Autumn Grand Sumo Tournament on Saturday. 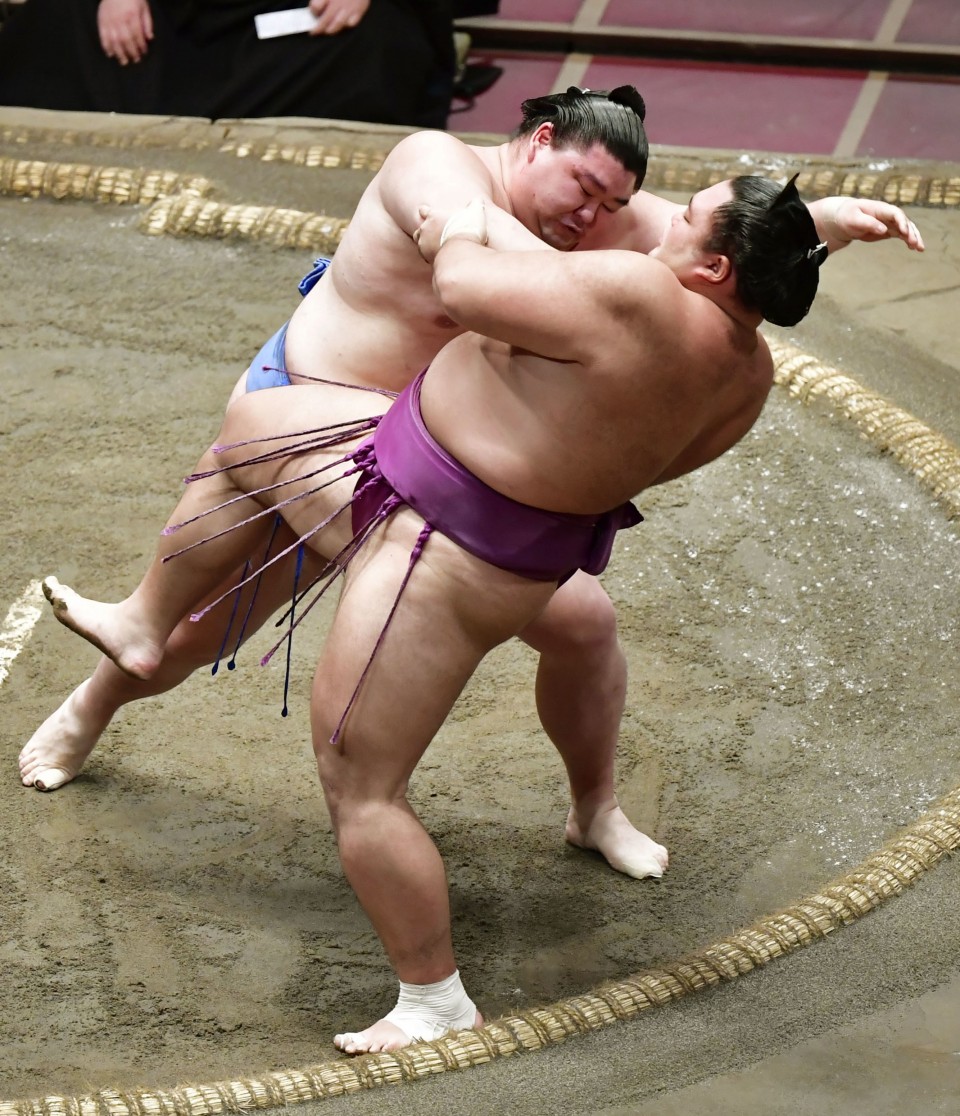 Sekiwake Shodai (L) closes to within one win of his maiden top-division championship by overpowering ozeki Asanoyama at the Autumn Grand Sumo Tournament on Sept. 26, 2020, in Tokyo. (Kyodo)

With one day of action left at Ryogoku Kokugikan, the 28-year-old from the Tokitsukaze stable heads the field outright, with 12 wins and two defeats, after joint overnight leader Tobizaru (11-3) lost to ozeki Takakeisho (11-3).

In the penultimate bout of Day 14, Shodai (12-2) battered Asanoyama (10-4) with an opening shoulder blast, then spun the powerfully built ozeki sideways before pushing him down at the edge.

With the imposing display of strength, Shodai avenged his loss to Asanoyama at the July grand tournament, while also ending the ozeki's bid for a second Emperor's Cup.

"My initial charge was as good as it could be," said Shodai, who could be on track to join Asanoyama at sumo's second-highest rank.

"I'm not thinking too much about the championship. Whatever the result, I just want to do my best in my final bout."

Shodai is scheduled to face the tournament's surprise performer, Tobizaru, on Day 15. Prior to setting the matchups for the final day of action, the Japan Sumo Association judges department met and decided that promotion would be discussed Sunday if Shodai clinches the championship.

Takakeisho slapped down Tobizaru to bounce back from his loss to Shodai on Friday and remain in a title race that had been wide open in the absence of injured grand champions Hakuho and Kakuryu.

But the ozeki was made to work by the 28-year-old top-division rookie.

Despite a strong opening charge, Takakeisho had a hard time budging the No. 14 maegashira, who fought back with a flurry of blows before being yanked to the clay.

Fighting in the final bout of the day for the first time in his career, Tobizaru said the experience left an impression.

"The level of excitement is completely different," Tobizaru said. "I couldn't help but enjoy it."

No. 8 Wakatakakage (10-4) failed to keep pace with the leaders after falling to sekiwake Mitakeumi, who picked up his all-important eighth win.

The former komusubi, who held the outright lead earlier in the meet, drove Takanosho toward the edge but was yanked to the ground before he could dislodge his opponent.

Takanosho, a Chiganoura stablemate of Takakeisho, appears on track for his first promotion to the three elite "sanyaku" ranks below yokozuna.

No. 5 Kiribayama (8-4-2) clinched a winning record for the meet by forcing out komusubi Okinoumi (4-10). Fighting out of the Michinoku stable, the 24-year-old Mongolian missed three days with a shoulder injury but returned on Day 13.