Sekiwake Shodai won a crucial showdown against ozeki Takakeisho to retain a share of the lead with newcomer Tobizaru on Friday, the 13th day of the Autumn Grand Sumo Tournament at Ryogoku Kokugikan.

Shodai (11-2), seeking his first championship, withstood consistent early pressure from Takakeisho (10-3), and his initial counter was easily dealt with by the ozeki, but his second -- a strong and timely shove with his left -- saw the ozeki lose his footing and hit the sandy surface. 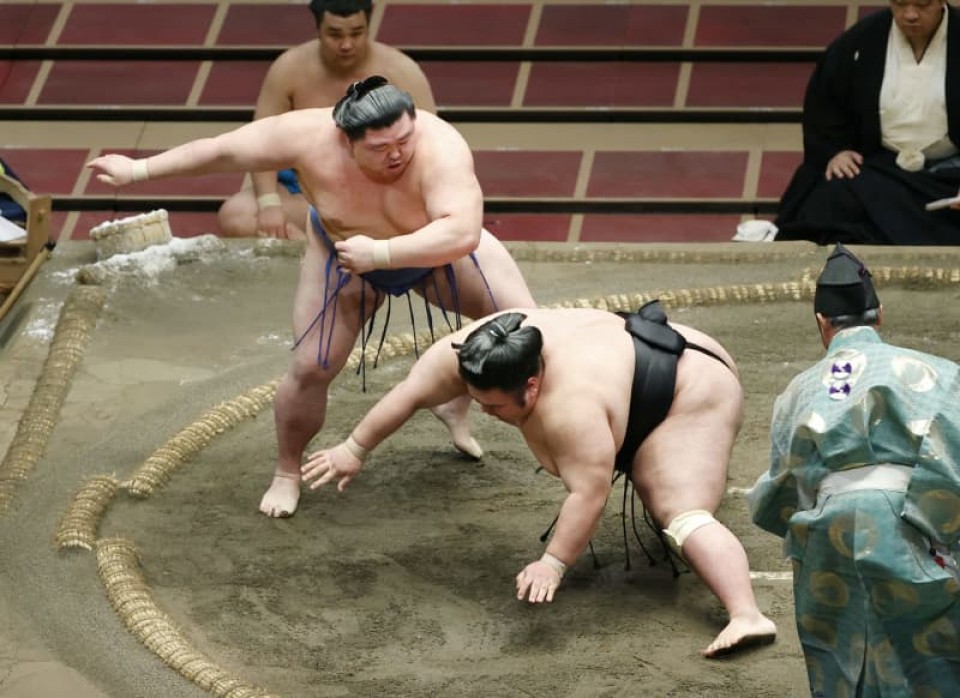 Sekiwake Shodai (L) wins a crucial showdown against ozeki Takakeisho to retain a share of the lead with newcomer Tobizaru on Sept. 25, 2020, the 13th day of the Autumn Grand Sumo Tournament at Ryogoku Kokugikan. (Kyodo)

"I didn't get beat on the initial charge, it was a really good lunge off the start," said the 28-year-old sekiwake. "I'm not thinking about the championship at all, even at this point. Curiously. I believe my past experience will help me."

Joining Shodai at the top is No. 14 maegashira Tobizaru (11-2), who has a real chance of getting his hand on the Emperor's Cup in his makuuchi division debut after claiming a fluke win over No. 1 Takanosho (8-5).

Tobizaru appeared to have left his mark too quickly, and appeared to slacken as he anticipated being called for a false start. It never came and the rookie looked destined for a defeat, until his unconvincing feint left Takanosho teetering. Tobizaru took advantage, got behind him and pushed him out.

Ozeki Asanoyama (10-3) claimed his 10th straight win to remain among four wrestlers with three defeats after brushing aside sekiwake Mitakeumi (7-6).

Asanoyama came in with his right shoulder high and easily got hold of the belt with his left before quickly executing an overarm throw to floor the hapless Mitakeumi. With both Hakuho and his fellow yokozuna Kakuryu absent through injury, Asanoyama and rival ozeki Takakeisho are the tournament's highest-ranked wrestlers.

No. 9 Onosho (10-3) remains in the chase after displaying a textbook lunge. The 24-year-old Onosho wrapped up his win in seconds. Both Onosho and his 33-year-old opponent, No. 5 Takarafuji (6-7), come from Nakadomari in northern Japan's Aomori prefecture.

No. 8 Wakatakakage, the other wrestler who started the day with three defeats, was handed a win by default after former ozeki and current No. 1 Terunofuji (8-5) pulled out of the meet with a left knee injury.

Mongolian Terunofuji won the July tournament to add to his maiden title from May 2015 as he returned to the elite makuuchi division after a two-and-a-half-year absence due to surgeries on both knees that saw him drop as far as the jonidan fifth division.

Terunofuji secured a winning record on the 11th day to all but guarantee his return to the three elite "sanyaku" ranks beneath below yokozuna, but lost to Onosho on Thursday to take a step back in the title race.

New sekiwake Daieisho (4-9) looks set to drop down from sanyaku at the next meet after getting pushed out in a frantic encounter against No. 5 Kiribayama (7-4-2). Komusubi Okinoumi (4-9), who was forced over the straw bales by No. 7 Ryuden (5-8), appears to be in the same boat.