Rebuilding hampered by virus in Kumamoto 1 month after heavy rain

Reconstruction in the wake of torrential rain that hit southwestern Japan has been hampered by a manpower shortage amid the coronavirus pandemic, as Tuesday marked one month since the disaster that killed 76 people and left three others missing in the region.

The hardest-hit prefecture of Kumamoto, where 65 people died, and 1,408 were living in evacuation shelters as of Monday, has struggled to secure sufficient workers for recovery efforts, such as removal of debris because it only solicits volunteers locally for fear of importing the virus.

A public health nurse in his 30s, who was sent to Kumamoto from Takamatsu in western Japan to help check on the health of residents staying at evacuation centers, and a Jiji Press photographer in his 30s, who covered the natural disaster, tested positive for the virus in July.

On Tuesday, around 60 people mourned for the victims by offering silent prayers in the village of Kuma, Kumamoto Prefecture, where 25 people died after a river flooded.

"We will promote the reconstruction with the help of many people," Kuma Mayor Koichi Matsutani told the officials. 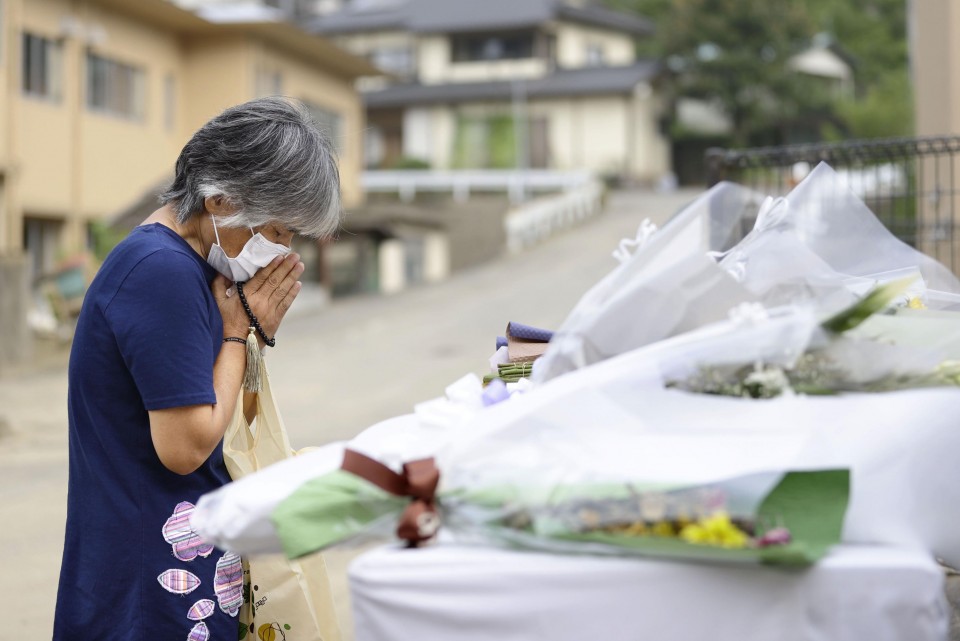 A woman prays at the Senjuen nursing home in Kuma in Kumamoto Prefecture on Aug. 4, 2020, a month after torrential rain caused deadly floods and mudslides in southwestern Japan. Fourteen residents died after a nearby river overflowed. (Kyodo)

Bereaved family members and others offered flowers for 14 residents of the Senjuen nursing home in the village who were killed after the Kuma River flooded.

The areas along the river were particularly struck hard by the heavy downpour that caused levees to break and swept away bridges and houses.

In Hitoyoshi, also in Kumamoto Prefecture, where 20 people perished, Mayor Hayato Matsuoka told an anti-disaster meeting, "We will devote all our strength and heart to remove the difficulties faced by survivors and stabilize their livelihood." 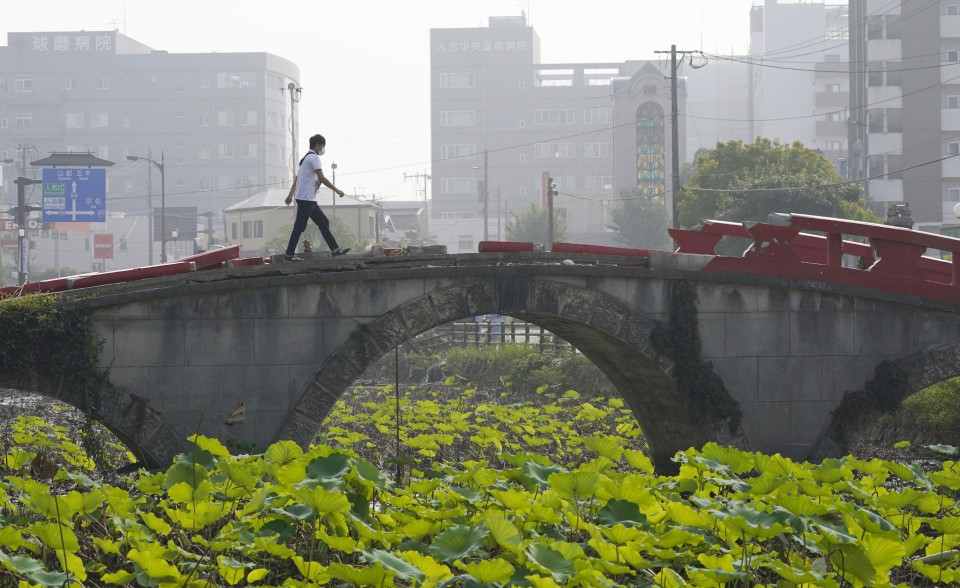 A passer-by crosses the bridge that leads to Aoi Aso shrine, a national treasure, in the flood-hit city of Hitoyoshi in Kumamoto Prefecture on Aug. 4, 2020, after it was damaged during torrential rain that hit southwestern Japan a month ago. (Kyodo)

Over the course of the long storm that battered a wide area of the country, a total of 82 people were killed, and more than 17,000 houses in 34 of Japan's 47 prefectures were damaged, according to a tally by the Fire and Disaster Management Agency.

Among them, 272 buildings were destroyed, and 579 partially destroyed, the agency also said.

The central government is planning to provide financial aid to some of the households whose residences were half destroyed in the disaster, according to the Cabinet Office.

Local governors have requested the central government to expand the scope of its subsidies as the current system only covers houses that are destroyed or severely damaged.