At least 54 cultural assets including World Heritage sites have been damaged by floods and mudslides caused by this month's heavy rain in Kyushu, the southwestern of Japan's four main islands, local governments said Wednesday.

The damaged assets include two on the UNESCO World Heritage List -- the Miike Coal Mine and the Hidden Christian Sites in the Nagasaki Region. The national treasure Aoi Aso shrine, which was founded around 1,200 years ago, was also damaged. 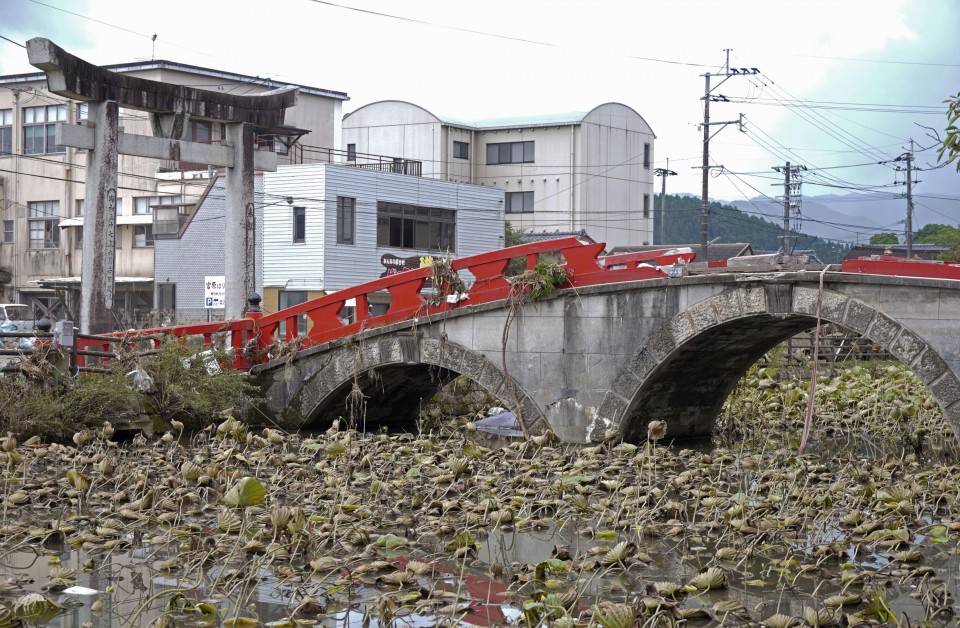 Photo taken July 13, 2020, shows the collapsed Misogi bridge to the Aoi Aso shrine, a national treasure, in the flood-hit city of Hitoyoshi, Kumamoto Prefecture, following torrential rain that hit the southwestern Japan region of Kyushu earlier in the month. (Kyodo)

Many privately owned cultural assets are believed to have been damaged by downpours as well, according to the governments.

Mudslides hit 15 locations in the Miike mine, which was inscribed on the U.N. Educational, Scientific and Cultural Organization's World Heritage list in 2015 as part of the "Sites of Japan's Meiji Industrial Revolution," according to the Fukuoka prefectural government.

The mine, featuring pits in Fukuoka and Kumamoto prefectures, bears testimony to the rapid industrialization of Japan from the mid-19th century to the early 20th century.

In Hitoyoshi, Kumamoto Prefecture, the Aoi Aso shrine -- which was designated a national treasure in 2008 -- was flooded after the Kuma River overflowed its banks.

Part of its signature bridge, known as Misogibashi, was washed away and some of the thatched roof of the Shinto shrine was damaged.

Of the 54 affected assets, 21 are located in Kumamoto Prefecture, which was particularly hit hard by the deadly rain.

An official of the Cultural Affairs Agency pointed out that starting restoration work quickly is key to the preservation of cultural assets because "there is only so much you can do as a precautionary measure" against natural disasters.

According to the agency, measures against mudslides and flooding involve major construction work, such as land elevation and the building of bulwarks, but it is difficult to relocate cultural properties in some cases.

Those measures can also impair the landscape and scenery, the agency added.

An organization for preserving privately held cultural assets called on the public to seek experts' help in handling damaged assets.

"Please don't discard them just because they are covered with mud," said Tsuguharu Inaba, head of the preservation group comprising university professors. The restoration of damaged assets may be possible by drying them and avoiding mold, he added.

The group has been engaging in preservation efforts since strong earthquakes rattled Kumamoto and its vicinity in 2016.

Unusually long downpours have damaged nearly 15,000 houses in wide areas stretching from southwestern to northeastern Japan, causing over 100 rivers to burst their banks and about 380 mudslides.