Prime Minister Shinzo Abe visited the southwestern Japan prefecture of Kumamoto on Monday to assess damage inflicted by deadly torrential rain and flooding in the area earlier this month.

During his first tour of the devastation, Abe visited the Senjuen nursing home where 14 residents died after the Kuma River flooded, and offered prayers for the victims.

In the village of Kuma, he met with Kumamoto Gov. Ikuo Kabashima, whose prefecture has seen 64 people killed in the disaster that struck a wide area of the Kyushu region. 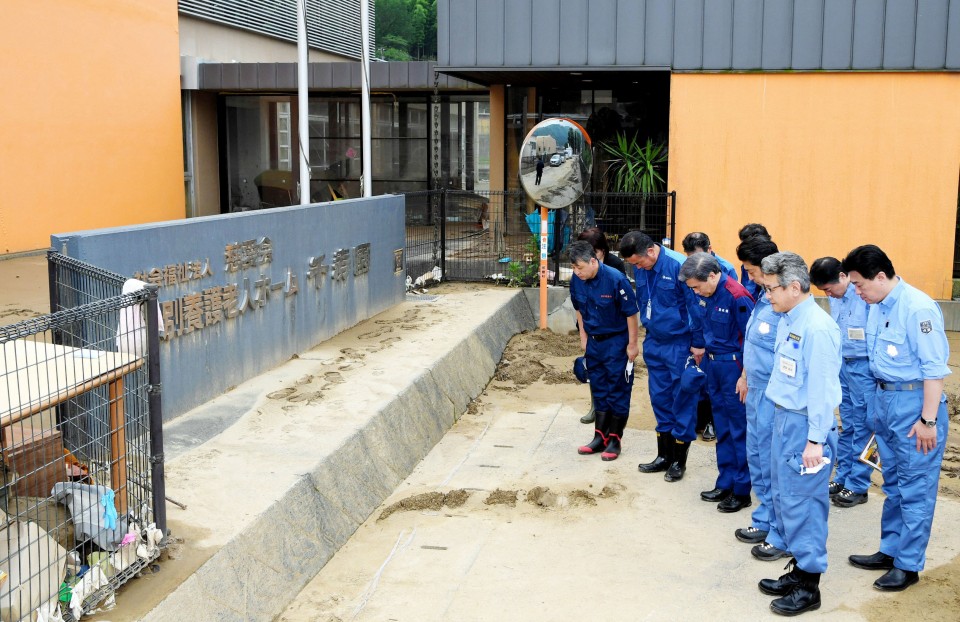 Japanese Prime Minister Shinzo Abe (4th from R) observes a moment of silence in the flood-hit village of Kuma in Kumamoto Prefecture, southwestern Japan, on July 13, 2020, at the Senjuen nursing home, where 14 residents died after torrential rain caused the Kuma River to overflow. (Pool photo) (Kyodo)

"Under the policy of doing all we can, we will make utmost efforts to achieve early recovery," Abe told the governor. Kabashima called for more help from the government.

Abe told reporters that the government plans to use over 400 billion yen ($3.74 billion), including from reserve funds, for reconstruction work and to help people and small businesses hit by the disaster.

During a government task force meeting held in Tokyo later in the day, Abe instructed officials to compile a rescue package by the end of the month, saying that the Cabinet will formally decide on the use of reserve funds for the disaster.

Ryota Takeda, minister for disaster management, accompanied the prime minister in touring Kuma and the city of Hitoyoshi, among the municipalities hardest hit by the disaster.

The widespread rain caused overflows of 105 rivers in 14 of the country's 47 prefectures and a total of 316 mudslides in 27 prefectures, the land ministry said Monday.

By prefecture, Kumamoto was hit by the highest number of landslides with 56, followed by Kagoshima with 44, Nagano with 27, and Nagasaki with 24, according to the Land, Infrastructure, Transport and Tourism Ministry. 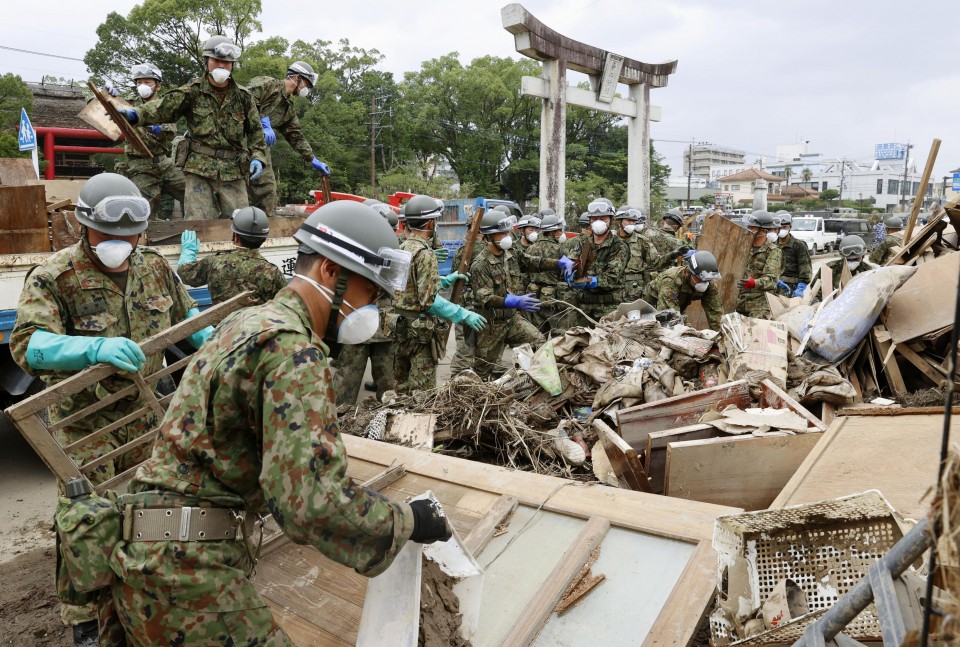 On Monday morning, elementary and junior high schools reopened in Hitoyoshi after a weeklong shutdown due to the disaster.

All of about 2,500 students of nine elementary and junior high schools in the city have been confirmed safe, with some of them currently staying in evacuation sites outside the city or the prefecture.

The city government is providing textbooks and other school necessities for students who have lost their bags and other belongings in the disaster.

"I'm still a little nervous, but excited to see my friends," said Ryoma Yamamoto, an 11-year-old fifth-grader who resumed classes on Monday.

Meanwhile, three elementary and junior high schools in Kuma will remain closed until July 31, while a total of five schools in the town of Ashikita and the city of Yatsushiro are expected to be shut for the time being due to severe damage in the municipalities, according to the prefectural board of education.

The area along the Kuma River was particularly hard hit by the disaster as downpours caused a levee to break, sweeping away houses and bridges. 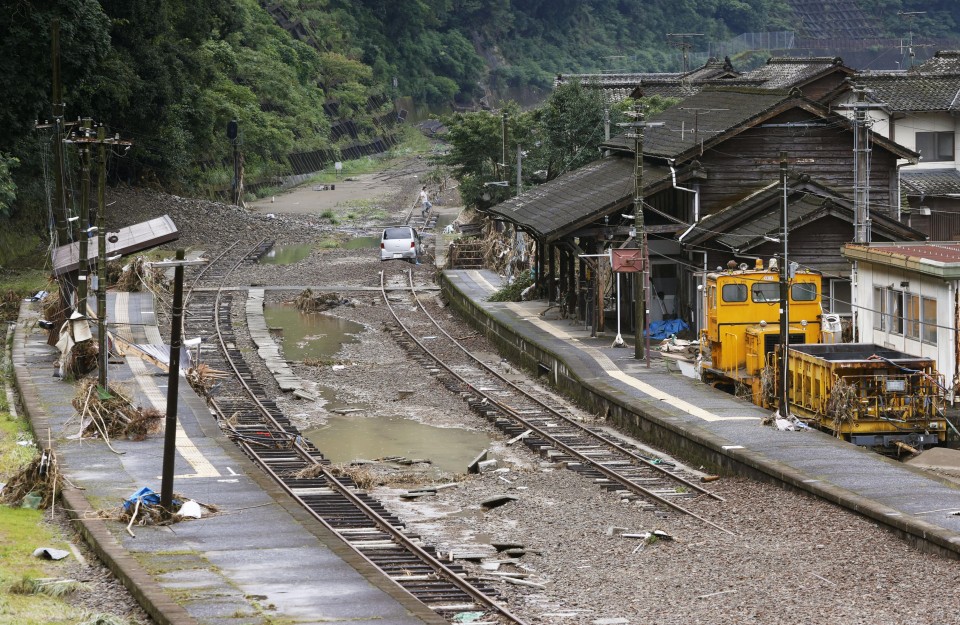 A Kyodo News reporter who entered Yatsushiro last Friday after roads were repaired saw overturned cars in a usually busy district of the city and a pile of mud inside Sakamoto Station of the JR Hisatsu Line.

Together with her two daughters, Yuko Tsurushita, 45, was cleaning her house after it had been submerged in floodwater.

When the rain hit the area in the early hours of July 4, she was outside, delivering newspapers with her elder daughter, 22.

With mudslides blocking roads, she called her second daughter, 17, at home, telling her to evacuate immediately with her 11-year-old brother. The family was reunited the following day at an evacuation shelter, she said.

"A disaster like this can happen again anytime. We can't continue to live here anymore," said Tsurushita, as she stood beside mud-covered furniture in front of her house.