Japan plans to set up new coronavirus testing centers at three major airports in Tokyo and Osaka, as well as in central parts of the cities, as the country prepares to relax its travel restrictions, health minister Katsunobu Kato said Thursday.

The facilities mainly targeting people entering Japan from abroad are to be built at the airports, Tokyo's Haneda, Narita near the capital and Kansai in Osaka Prefecture, as early as this summer, according to government officials.

The construction of the facilities is aimed at increasing the amount of polymerase chain reaction, or PCR tests, to over 4,000 per day, with health authorities also hoping to reduce virus testing times to a few hours by using new methods. 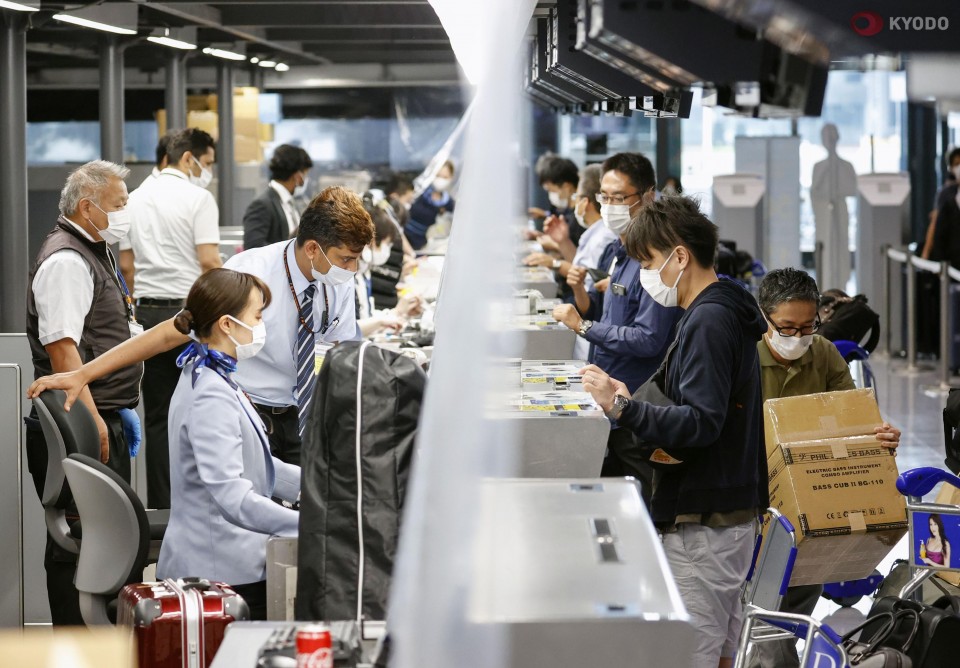 Passengers (R) check in at Narita airport near Tokyo on June 25, 2020, before boarding a chartered flight to Vietnam's Van Done. (Kyodo)

Airport quarantine stations currently conduct about 1,000 daily PCR tests, with results confirmed in around one or two days.

"(The centers) will probably be operated by private medical institutions and testing firms," Kato told reporters after an inspection at Narita airport. "We, as the health ministry, will fully support them."

The facility at the airport is expected to be under construction for two months and open in September.

According to the officials, the envisioned testing centers in central parts of the two major cities will target travelers leaving for foreign countries, while the facilities near the airport are intended for both arrivals and departures.

The government is also considering issuing certificates for those who test negative, the officials said.

Since February, Japan has been strengthening travel restrictions for inbound visitors, as part of its border control measures to prevent the spread of the COVID-19 disease.

On Monday, another 18 countries including Algeria, Cuba and Iraq were added to Japan's entry ban list, raising the total number of countries and regions subject to the measure to 129.

However, Japan is currently in talks with several countries to mutually ease travel restrictions for businesspeople on condition they submit negative test results and an itinerary on where they plan to go during their stay.

Those countries include Australia and Thailand. Japan may also begin talks with Taiwan and Brunei as early as this month, diplomatic sources said Wednesday.