Japan could begin talks with Taiwan and Brunei as early as this month on easing travel restrictions meant to prevent the novel coronavirus from spreading, diplomatic sources said Wednesday.

China and South Korea are also under consideration, though there remain concerns over letting in a large number of foreign travelers due to Japan's limited virus testing capacity, the sources said. Businesspeople are expected to be given priority followed by students and tourists will come last. 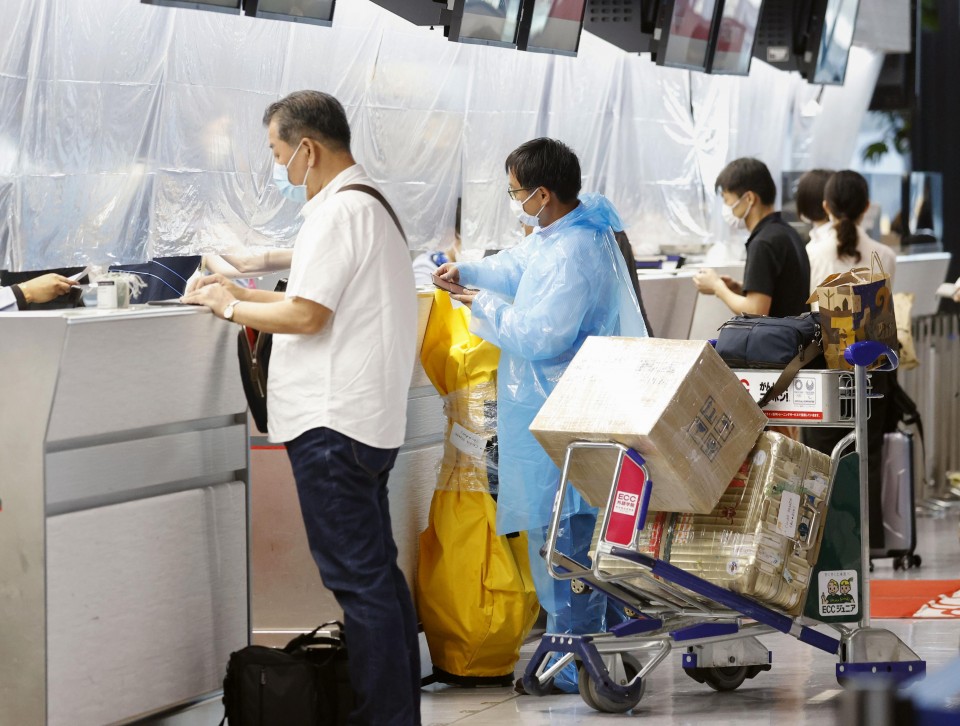 People check in at Narita airport near Tokyo on June 25, 2020, before boarding a chartered flight to Vietnam's Van Done. (Kyodo)

Travel to and from Japan has virtually stopped since an entry ban was imposed on areas that have seen a rise in infections, dealing a blow to the world's third-largest economy.

A total of 129 countries and regions are currently on the blacklist, with foreign travelers who have been to any of the areas within 14 days being turned away. Taiwan and Brunei were added on April 3.

The sources said the two are prime candidates to ease the travel restrictions because both had succeeded in containing the coronavirus and there would likely be a manageable amount of traffic. Taiwan has seen 447 cases and Brunei just 141, according to data compiled by Johns Hopkins University.

China and South Korea pose a greater challenge due to the much larger number of people who would seek to come to Japan, which is scrambling to increase the number of polymerase chain reaction, or PCR, tests it can administer daily.

Japan is already in talks with Vietnam, Thailand, Australia and New Zealand to mutually ease travel restrictions for businesspeople, on the condition that they submit negative test results and an itinerary on where they plan to visit during their stay.

Travel from Japan to Vietnam to partially resume this week: Motegi