Chinese Foreign Minister Wang Yi warned Sunday that the United States is spreading a "political virus" vilifying China at a time when the two nations should cooperate to tackle COVID-19, accusing Washington of trying to trigger a "new Cold War."

The U.S. administration of President Donald Trump "made too many lies," Wang said at a press conference on the sidelines of the national legislature, adding China "must be vigilant" against attempts by Washington to turn its relations with Beijing into a "new Cold War." 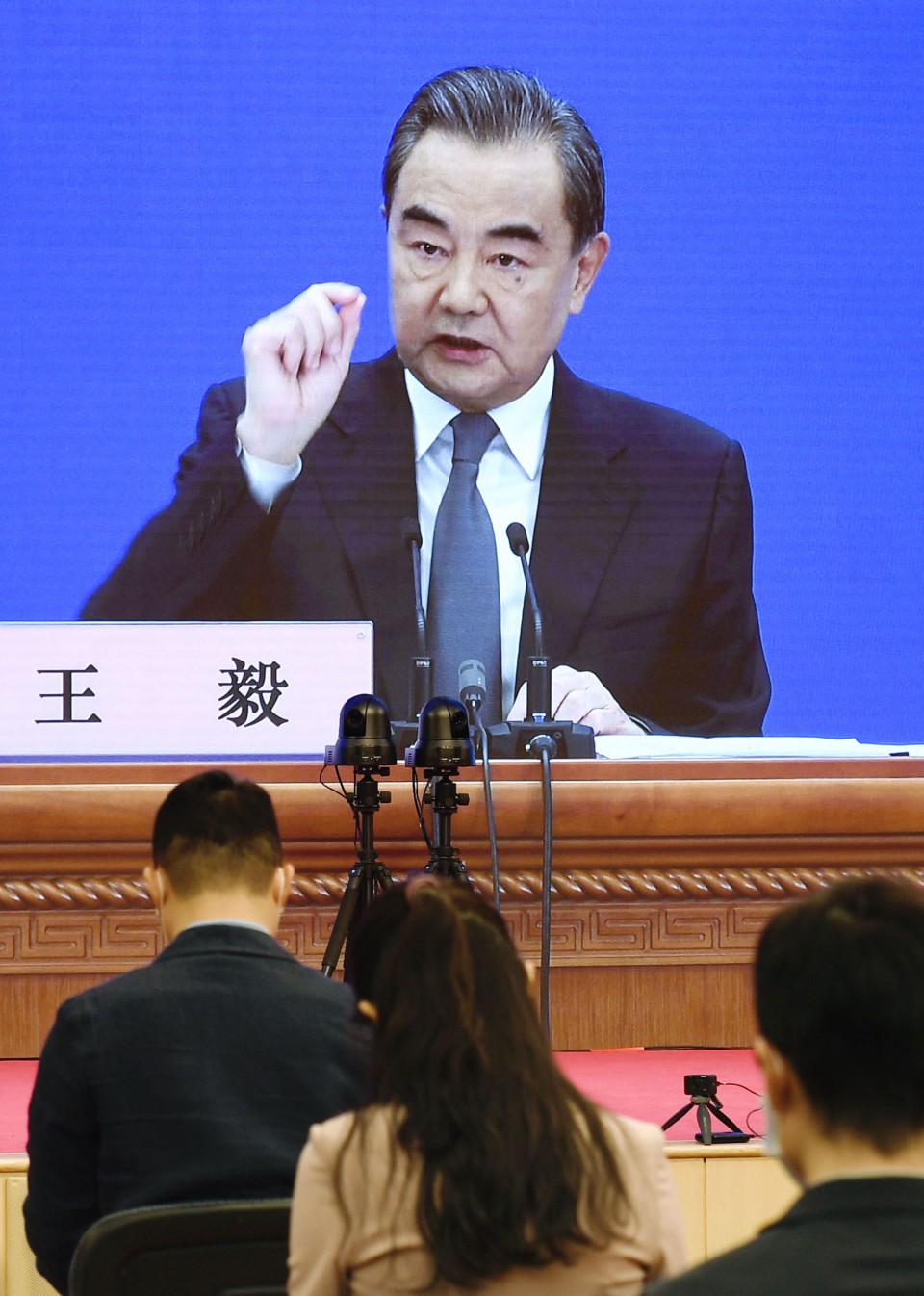 Chinese Foreign Minister Wang Yi is shown on a screen during a press conference in Beijing on May 24, 2020. (Kyodo)

Calling for avoidance of confrontation, China and the United States should work together "to mitigate the impact of the epidemic on the economies of the two countries and the global economy," Wang said.

Wang's remarks came as tensions between Washington and Beijing have been intensifying over issues including trade, responsibility for the outbreak of the virus, which was first detected in the central Chinese city of Wuhan late last year, as well as Hong Kong and Taiwan.

Since the number of coronavirus infections in the United States started to surge in late March, Trump has been stepping up efforts to pin the blame on China in an apparent bid to gain public support in the run-up to the U.S. presidential election in November.

"Some U.S. politicians have politicized the origins of the virus and stigmatize China," Wang said.

The United States and other countries have urged China to pay compensation for damage caused by the pandemic, but Wang rejected the claim, asking them not to infringe on his nation's sovereignty and dignity.

As for Hong Kong, he emphasized the importance of legal reforms aimed at protecting national security in the territory, which has been wracked by often violent large-scale protests since June last year.

"It is imperative to establish and improve the legal system and enforcement mechanism of the Hong Kong Special Administrative Region to safeguard national security," he added.

At this year's session of the National People's Congress, China is discussing a bill to crack down on what Beijing considers subversive activity in Hong Kong, in a move that has already further antagonized protesters opposed to the Communist-led government.

On Sunday, an unauthorized protest against China's plan to enact the controversial bill took place in Hong Kong, escalating into one of the biggest mass gatherings there since the pandemic began.

The United States should "fully recognize the high sensitivity of the Taiwan issue," Wang said.

Taiwan and mainland China have been governed separately since they split following a civil war in 1949. Beijing regards the self-governing, democratic island as a renegade province.

Wang, meanwhile, underscored that China has maintained amicable ties with its neighbors, Japan and South Korea, saying the three countries should lead a recovery in the regional and global economy hit hard by the virus spread.

Touching on security in East Asia, Wang also expressed hope that the United States and North Korea will resume denuclearization talks as soon as possible, although their negotiations have been stalled over sanctions relief.

North Korea "has taken many positive measures in the past years," Wang said, referring to Pyongyang's pledge to suspend tests of nuclear weapons and intercontinental ballistic missiles that could reach the U.S. mainland.

"But regrettably, there is no substantial response from the United States. We believe that this is a key reason why North Korea-U.S. dialogue has been at a standstill," Wang said.

China's annual parliamentary session, which was postponed from March 5 against the backdrop of the pandemic of the new coronavirus, kicked off Friday. The gathering will continue through Thursday.

Wang's news conference was held at the Great Hall of the People in Beijing via a video call. He received questions from reporters who were tested for the virus in advance and sat 1 meter apart in a different room in the building.

The virus that causes the respiratory disease COVID-19 has infected about 83,000 people in the mainland and killed more than 4,600. The number of new infections has been decreasing in China in recent months.