The unauthorized protest in the Causeway Bay district was one of the largest mass gatherings in Hong Kong since the global COVID-19 pandemic began.

The police said on social media that the demonstrators occupied roads and obstructed traffic around 1 p.m. and threw umbrellas and plastic bottles at the police. Riot police fired rounds of tear gas "to stop violent acts of rioters," the Facebook post said.

It added that bricks dug up from sidewalks were scattered on the roads and scaffolding was commandeered to form makeshift roadblocks, some of which were set on fire. In addition, some traffic lights were damaged and a glass panel of a shop in Causeway Bay was shattered by rioters.

At least 120 people have been arrested, mostly for "unlawful assembly," the police said. 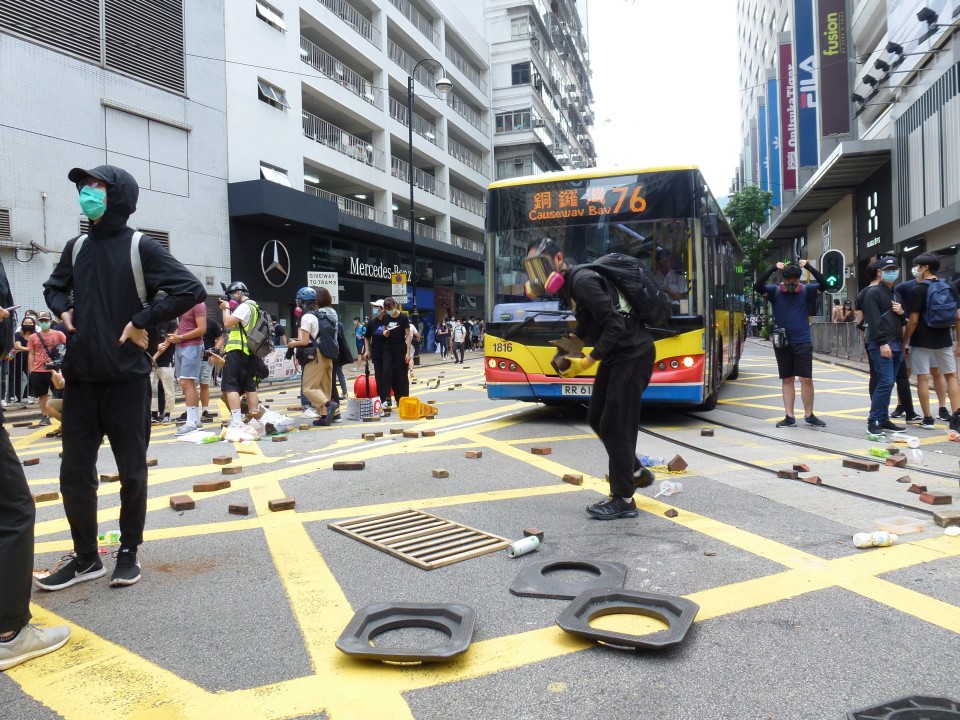 The demonstrators, who numbered in the thousands at one point according to local media, marched about 1 kilometer from Causeway Bay to Wan Chai on Hong Kong Island, shouting slogans along the way such as "Hong Kong independence is the only way out" and "Five demands, not one less!"

Speaking to reporters in Beijing on Sunday, Chinese Foreign Minister Wang Yi said it is "imperative" to introduce the law because "violent terrorist activities have been escalating and external forces have deeply illegally interfered in Hong Kong affairs."

China's National People's Congress, which is in its annual session in Beijing, will pass a resolution to enact laws and set up an enforcement mechanism for Hong Kong to safeguard national security, a rare move apparently aimed at circumventing the local legislature and directly imposing Chinese laws in the territory.

Its decision to sidestep the local legislative process has drawn concerns from foreign countries, including the United States, Britain and Canada, over its impact on Hong Kong's guaranteed rights and freedoms.

Canada, Britain and Australia issued a joint statement Saturday saying they are "deeply concerned" at the national security law introduction.

"Making such a law on Hong Kong's behalf without the direct participation of its people, legislature or judiciary would clearly undermine the 'one country, two systems' principle under which Hong Kong is guaranteed a high degree of autonomy," the statement read.