Shanghai Disneyland resumed operations on Monday for the first time since late January, becoming the first Disney park in the world to readmit guests with the number of new coronavirus infections decreasing in China.

By enabling the popular theme park to reopen, the Chinese leadership of President Xi Jinping has apparently tried to show its confidence that it has brought the country's virus outbreak under control, foreign affairs experts say.

For the time being, Shanghai Disneyland will take measures to prevent the spread of the virus, such as limiting entry, offering to pre-book, and urging guests to wear face masks, as requested by the Chinese government.

Before the theme park opened at 9 a.m. on Monday, fans, some of who wore Mickey Mouse ears and were dressed as Disney characters, came and lined up keeping a distance of about one meter apart, as measured by markers on the ground.

As social and economic activities return to normal at home, China has decided to hold a postponed annual session of its parliament from May 22. The National People's Congress usually takes place for around 10 days from March 5 in Beijing. 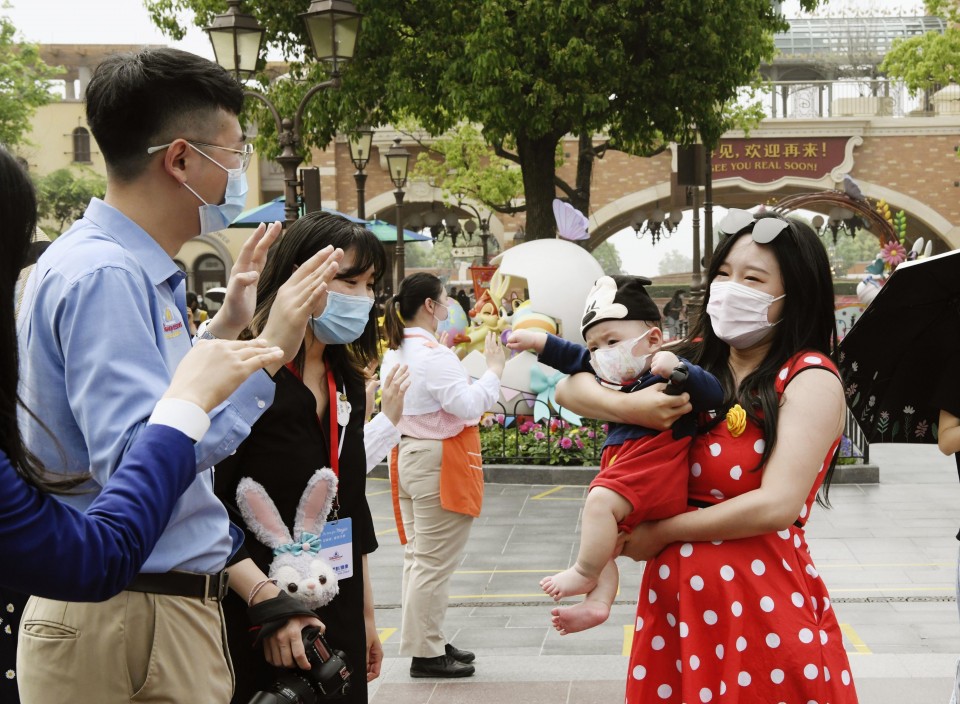 (People visit Shanghai Disneyland on May 11, 2020, the day it reopened amid signs of improvement in the coronavirus situation in China.)

On Monday, meanwhile, a Japanese school in the capital, which had been closed since late January because of the virus, restarted classes for students in the ninth grade.

In the morning, nine students wearing face masks went to school, reuniting for the first time in more than three months. The school, however, will continue to provide online classes as six students have not returned from Japan to Beijing.

In March, the Chinese Foreign Ministry abruptly announced a temporary ban on foreigners entering the nation. The measure has applied even to those who hold a valid visa or residence permit.

The coronavirus, which causes the respiratory disease COVID-19, was first detected late last year in the central Chinese city of Wuhan. It has infected nearly 83,000 people on the mainland and killed over 4,600, China's health authorities said.

Xi urges cooperation against virus in message to Kim: Xinhua