With global demand for ventilators skyrocketing due to the coronavirus pandemic, an Australian designer has created a low-tech prototype using everyday items, like a bucket and bicycle wheels, that could be used in hospitals in developing countries.

Sam Canning, an industrial design lecturer at Queensland's Griffith University in northeastern Australia, told Kyodo News he was inspired to make the ventilator prototype after hearing how a doctor in Papua New Guinea used a ventilator bag to save a woman's life.

"A doctor in PNG had a lady who'd just given birth. (There were) lots of complications and they kept her alive for five days with medical students squeezing a bag," Canning, 51, said. "And I thought to myself, 'What's the minimum needed to keep someone alive in a situation like that?'" 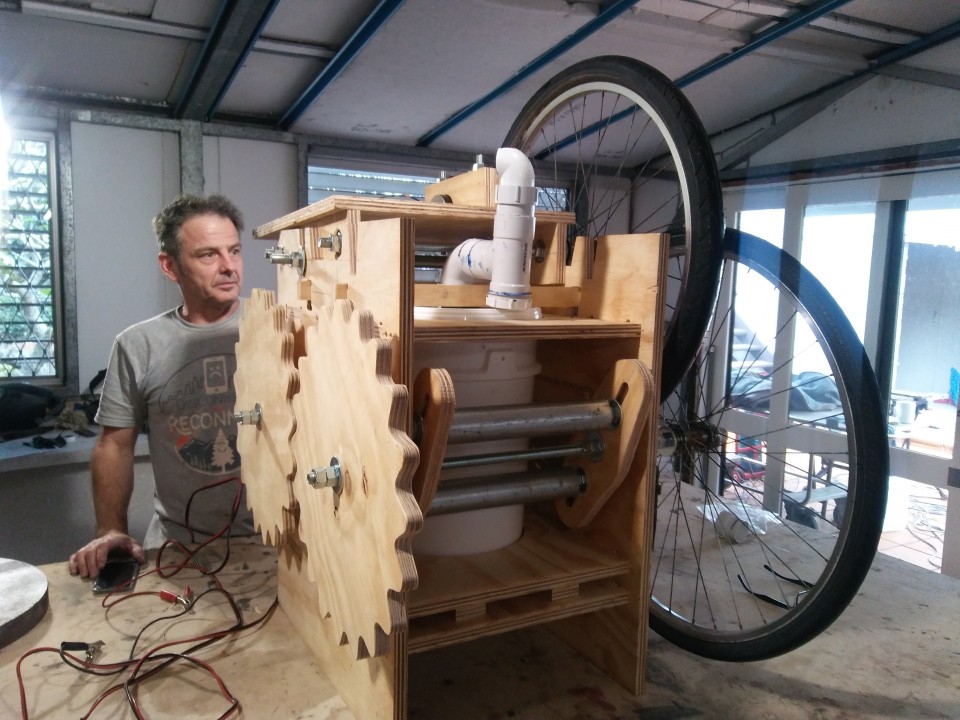 "At the same time, I was listening to the BBC, and I heard that South Sudan had two ventilators for a country of 10-12 million people. Vanuatu doesn't have a single ICU bed. So, lots of places all over the world (need medical equipment)," he said.

Canning said it troubled him that with modern ventilators costing tens of thousands of dollars, developing countries "have really got no hope" of getting the medical equipment needed to treat people with critical symptoms of COVID-19, the illness caused by the new coronavirus.

According to the World Health Organization, roughly one in five people who are diagnosed with COVID-19 become seriously ill and develop difficulty breathing. To assist the patient, a ventilator is used to pump air, often with increased levels of oxygen, into the lungs.

While modern ventilators control for numerous factors like humidity, the volume of each breath and the composition of gasses the patient takes in, Canning's prototype strips down the mechanism to the bare minimum required. 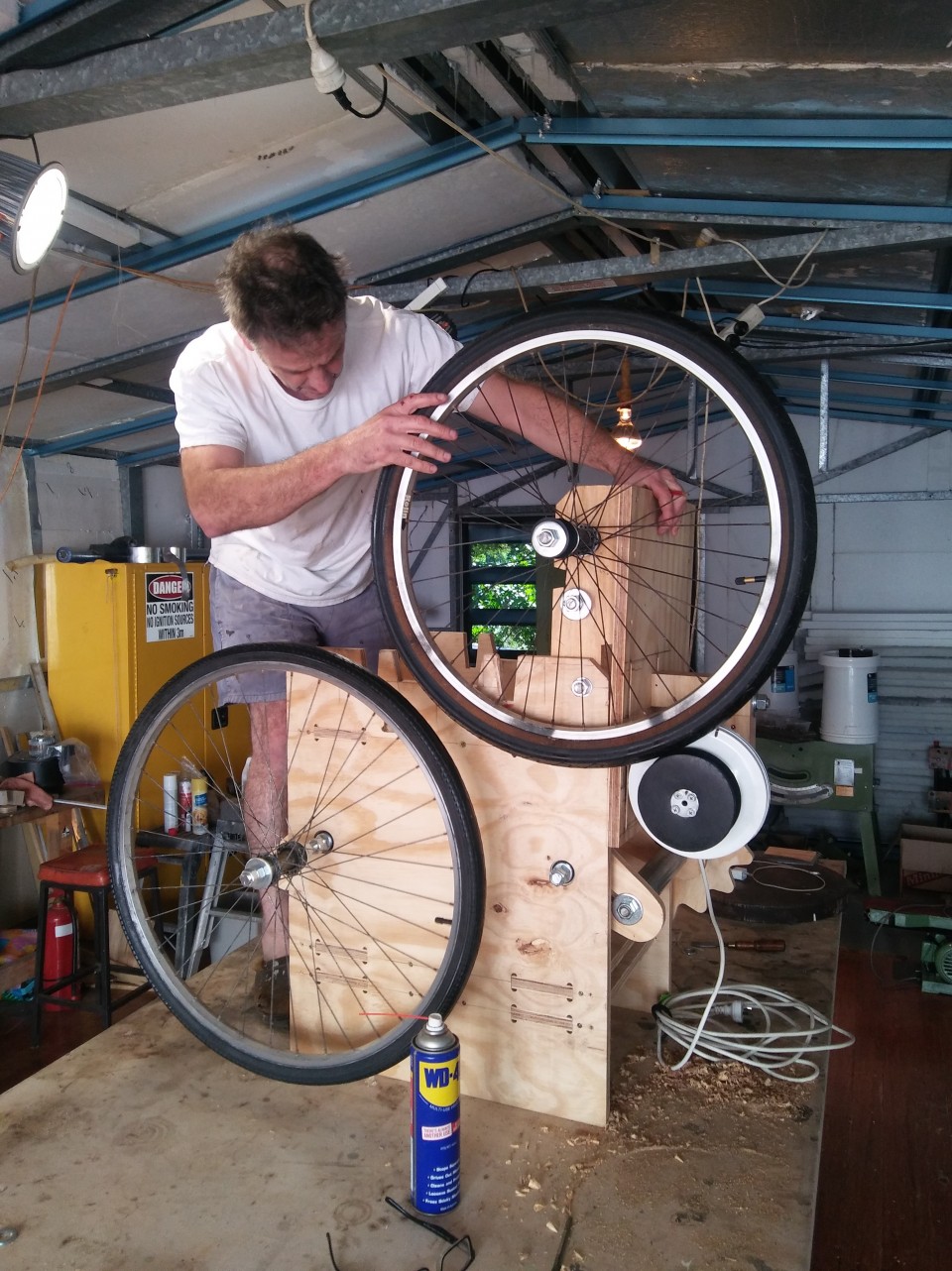 At the core of Canning's design is a bucket made from polypropylene, a type of flexible plastic that can withstand pressure. While most other parts of the ventilator can be replaced, Canning says the bucket is key to the machine's functionality.

Two paddles on either side of the bucket rotate simultaneously, squeezing the sides of the bucket, which in turn pumps air in and out through a series of one-way valves, ensuring the patient never breathes the same air twice.

Canning's prototype uses a small scooter motor to power the rotating paddles, but he said he's also used a second-hand ceiling fan and said people could also turn the paddles by hand, or attach them to a bicycle and use peddle power.

"There's no one way to make this. So long as you've got a bucket and at least some of the components, you could probably make it work," he said.

In total, Canning estimates it took him two weeks and roughly AU$200 ($130) to design and build the ventilator.

He admitted that while his ventilator, made from wood and spare parts, "probably looks ridiculous" when compared to what's found in Australian hospitals, the machine works exactly as it is meant to. 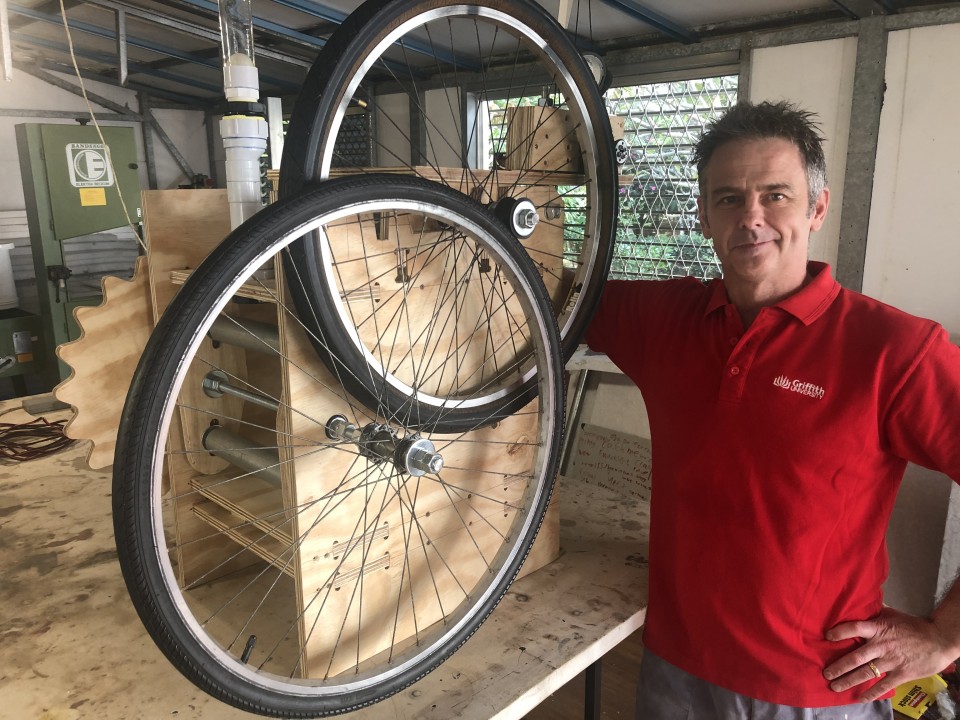 "All ventilators are basically just a pump, a one-way pump. And it works, it's a great pump," Canning said.

The university lecturer said he's already had some interest from countries including Vanuatu, Mozambique, and Uganda, and plans to release the finalized design for free.

"I don't want anything, IP (intellectual property rights) or anything," he said.

"I would be absolutely overwhelmed if it even helped just one person. I would be overjoyed."