Japan is arranging to simultaneously lift the nationwide state of emergency declared for 34 out of Japan's 47 prefectures over the novel coronavirus on Thursday after consulting a panel of experts, government sources said Monday.

Prime Minister Shinzo Abe has indicated some prefectures could be taken off the list of those placed under the state of emergency before its May 31 expiry. Speaking in parliament, he said Japan is on a "steady" path toward ending the coronavirus epidemic.

Of the remaining 13 prefectures which have been designated by the government as requiring special caution due to their large number of infections, Ibaraki and Gifu prefectures are also being considered, the sources said.

"We are planning to hear expert opinions on May 14 and announce if any partial lifting will be possible," Abe told a session of the lower house budget committee.

The premier initially issued a monthlong state of emergency until May 6 for seven urban areas including Tokyo, Osaka, and Fukuoka. He expanded it to all 47 prefectures in mid-April and extended it by about a month until May 31 in the hope there would be a downtrend in new cases, thereby easing the strain on hospitals.

The government has divided the 47 prefectures into two groups. The first group, numbering 13, is made up of prefectures such as Tokyo and Osaka, while the remaining 34 are not on such a special alert.

Economic revitalization minister Yasutoshi Nishimura told the same parliamentary session that the emergency declaration could be lifted in "many" of the 34 prefectures if the infection situation is judged to have stabilized. The same can be also said of the other 13 prefectures, Nishimura said.

Even if the state of emergency is removed, however, the government will continue to ask people to refrain from moving across prefectural borders and holding large gatherings.

"If the number of infections rises and signs of 'overshooting' emerge (in a prefecture where the state of emergency has been lifted), we'd have to consider placing it under the declaration again," Nishimura said. Japanese officials use "overshooting" to mean an explosive increase in virus cases.

The government has faced the difficult challenge of pursuing the containment of COVID-19 and the resumption of some economic activities at the same time.

Amid increasing calls for more emergency measures to support struggling businesses and students and another extra budget to fund them, Abe said he will act "boldly if judged necessary."

He told the parliamentary session that the government will take additional steps to extend support to students who are struggling financially and whose income depends on part-time jobs.

Last week, the ruling coalition of the Liberal Democratic Party and Komeito proposed to Abe that the government should shoulder part of the rent for small and midsize companies hit by sharp revenue falls due to the coronavirus pandemic.

Yuichiro Tamaki, leader of the opposition Democratic Party for the People, pressed Abe to make multiple cash distributions to all individuals, to which the prime minister said he will consider further steps based on the assessment of the panel of experts.

Under the state of emergency declaration, prefectural governors can request businesses to shut, though there are no penalties for noncompliance, seen as a limit of the current legal framework.

In the 13 worst-hit prefectures, local governments have asked people to refrain from nonessential outings and businesses. 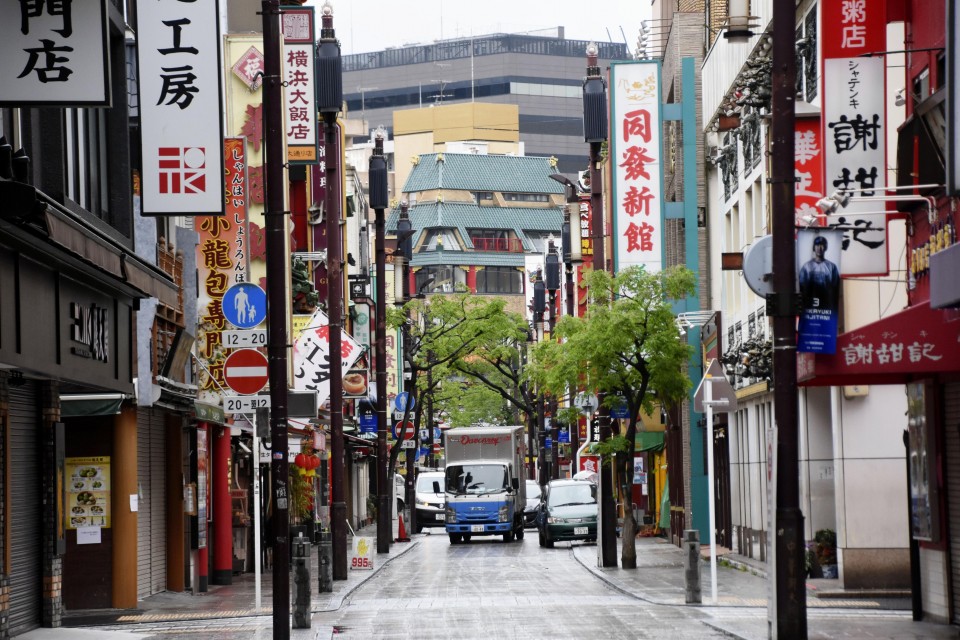 (Yokohama's Chinatown is deserted amid coronavirus fears during the Golden Week holidays, as pictured on May 4, 2020.)

Some governors have already set out their own criteria for relaxing curbs on business activity. After Osaka Gov. Hirofumi Yoshimura took the initiative, the governor of Aichi, the central Japanese prefecture that is home to Toyota Motor Corp., followed suit on Monday.

Aichi Gov. Hideaki Omura set three criteria -- the numbers of new cases and hospitalized patients and the percentage of those testing positive for the new coronavirus.

Omura said he will ease calls for self-restraint if the three criteria are met, regardless of whether his prefecture remains designated by the central government as an area needing "special caution."

"The number of infected people has been falling since April 25. We've entered a stage in which we need to prepare for economic activity to resume and schools to reopen," the governor said at a press conference.

If the number of new cases stays below 10 a day, the percentage of those testing positive below 5 percent, and the number of patients in hospital below 150 for seven straight days, the governor will consider relaxing the curbs.

Osaka has similar criteria: the number of cases with untraceable routes, the percentage of those testing positive and the bed occupancy rate for patients with severe symptoms.

Japan has avoided an explosive surge in infections and recent data suggest that the epidemic may be leveling off. But the government panel of infectious disease and public health experts has said the pace of decline in new cases is not rapid enough and it is too soon to relax vigilance.

Abe said clinical trials of a vaccine are expected to begin in Japan as early as July, adding that the University of Tokyo, Osaka University and the National Institute of Infectious Diseases are developing one.

The total number of cases, including about 700 from the Diamond Princess cruise ship that was quarantined near Tokyo in February, has surpassed 16,500, with over 640 deaths.

Tokyo starts doling out cash to businesses closed due to coronavirus