Recent decisions by major Japanese retailers including Seven & i Holdings Co. and Takashimaya Co. to forego the release of earnings guidance due to the coronavirus outbreak highlights the seriousness of Japan's consumption slump.

Convenience stores, supermarkets and drugstores, exempt from the government's business closure requests, are among the small number of companies benefitting from changing consumer behavior as people spending more time at home stock up on frozen and processed foods as well as basic necessities.

But analysts say the new consumption pattern won't lift the economy out of slowdown and that questions remain about how effective the state of emergency through May 6 will be in containing the coronavirus.

"It's true some retailers and online grocery stores are benefiting from demand from people staying home," said Hideyuki Araki, an analyst at Resona Research Institute.

But while the economic effect of increased sales at convenience stores and supermarkets in offsetting the impact on overall consumer demand "remains unclear," they will not be enough to make up for lost sales in other areas of consumption such as dining out, he said.

Among major retailers, Seven & i, which operates the Sogo and Seibu department store chains, Takashimaya, which operates the Takashimaya department store chain, and Ryohin Keikaku Co., which runs the Muji chain of stores, said they cannot provide their year-to-February earnings forecast due to the uncertain consumption outlook. Supermarket operator Aeon Co. omitted a net profit outlook in its earnings estimate for the year through February.

"There are so many uncertain factors, and we do not want to cause confusion by making a forecast," Seven & i President Ryuichi Isaka told a press conference last week.

Operating profit in its department store business for the year to February fell 78.7 percent from a year earlier to 797 million yen ($7 million), hit by plunges in duty-free sales to inbound travelers since late January and to domestic consumers.

But overall, Seven & i logged a record operating profit of 424.27 billion yen, up 3.1 percent, helped by increased earnings by Seven-Eleven convenience stores in Japan and abroad.

Takashimaya President Yoshio Murata said at a press conference Monday, "The outlook for the containment of the coronavirus outbreak remains uncertain, and calculating the impact of the government's declaration of a state of emergency and its economic stimulus package is difficult. We are also not sure how long our outlets will remain closed."

J. Front Retailing Co., operator of Daimaru and Matsuzakaya department stores, said Friday it expects a 76.5 percent drop in net profit to 5 billion yen for the year through February. 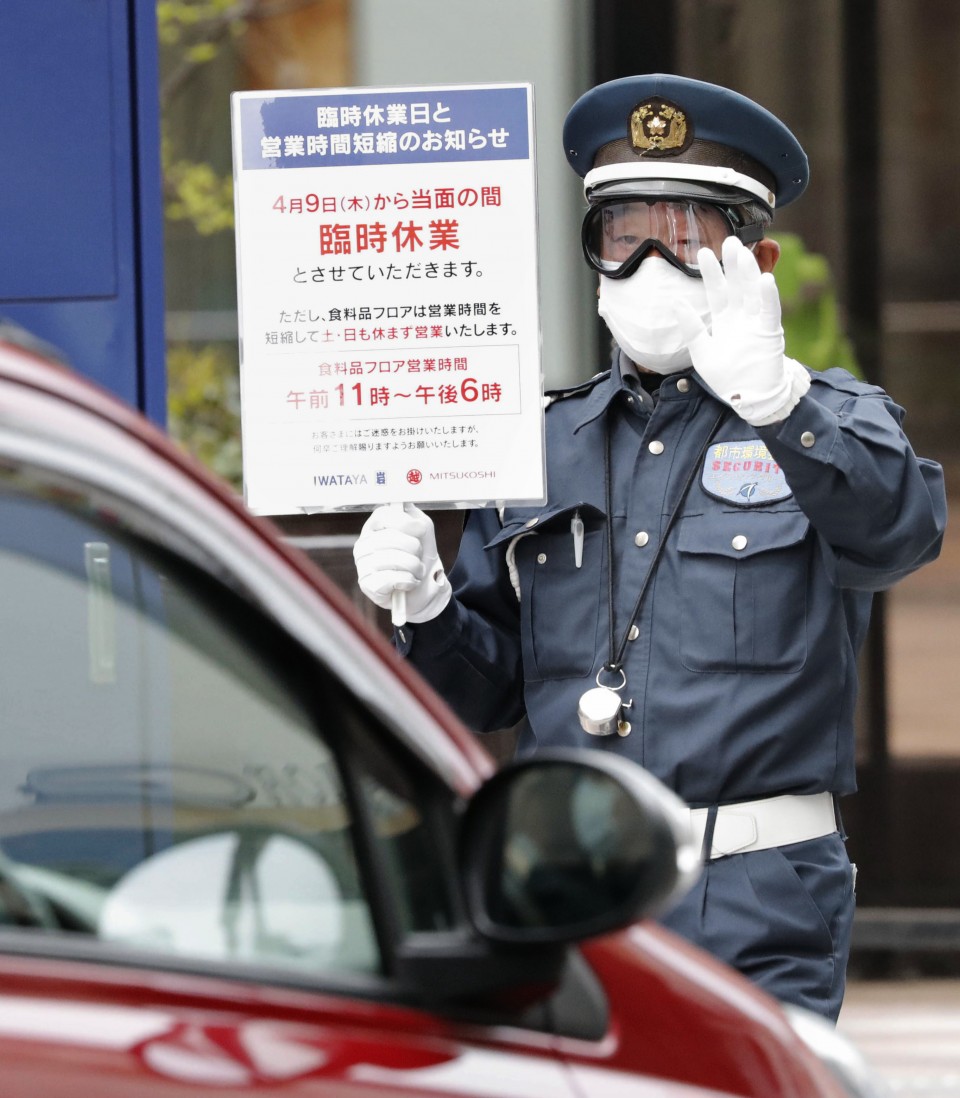 (A worker wearing goggles and a mask informs a car driver of the closure of a department store in Fukuoka.)

Fast Retailing Co., operator of the Uniqlo casual clothing chain, revised down its group net profit estimate for the year ending in August to 100 billion yen from the previously projected 165 billion yen, saying the figure is based on its current assumption that sales will gradually recover from June.

Convenience store operator FamilyMart Co. said it expects its net profit to grow 37.8 percent in the year to February to 60 billion yen but added the guidance could be revised as the outlook is murky.

Wakaba Kobayashi, analyst at Daiwa Institute of Research, warns that more companies may be forced to take further cost-cutting measures such as pay cuts, consequently prolonging the economic slump.

"If more employees see their salaries cut as a result of workforce adjustments, the recovery in private consumption even after the containment of the coronavirus would be moderate," Kobayashi said.

Resona Research's Araki predicts that a drop in private consumption due to the pandemic will push down Japan's gross domestic product by 10.8 percentage points in the currently planned period of the state of emergency from April 7 to May 6.