With face masks on, many Japanese headed to work as usual on Monday, the first business day since Prime Minister Shinzo Abe called for a 70 percent reduction in commuters to curb new coronavirus infections.

Some workers voiced difficulty in following Abe's request due to the nature of their jobs. Others said they could not do everything at home even as teleworking had gradually become part of their everyday life nearly a week after a state of emergency was declared for Tokyo and six other prefectures in Japan.

"I'm aware of the 70 percent cut (in commuting), but I can't take time off from work," said a 69-year-old man who is in the medical field.

Mitsuhiro Shibuya, a 58-year-old whose job involves goods purchasing for supermarkets, said, "I've been teleworking recently, and I go outside when I have no other choice."

Japan has been battling to stem a further surge in coronavirus infections, with people in the prefectures covered by the emergency declaration asked to avoid nonessential outings. Grocery shopping and hospital visits are not included.

Tokyo confirmed 91 additional cases of new coronavirus infections on Monday, bringing the total to 2,158 in the Japanese capital with a population of about 14 million.

To lift the state of emergency when the one-month period ends on May 6, Abe has said people need to reduce contact with others by as much as 80 percent. On Saturday, he asked companies to promote teleworking to achieve the needed 70 percent cut in commuters.

In Tokyo's Marunouchi business and commercial district, many shops were closed with few people seen walking the streets.

"I've shifted to teleworking, but I need to go to the office once a week, which is today," said a 57-year-old public servant whose work involves disaster relief. 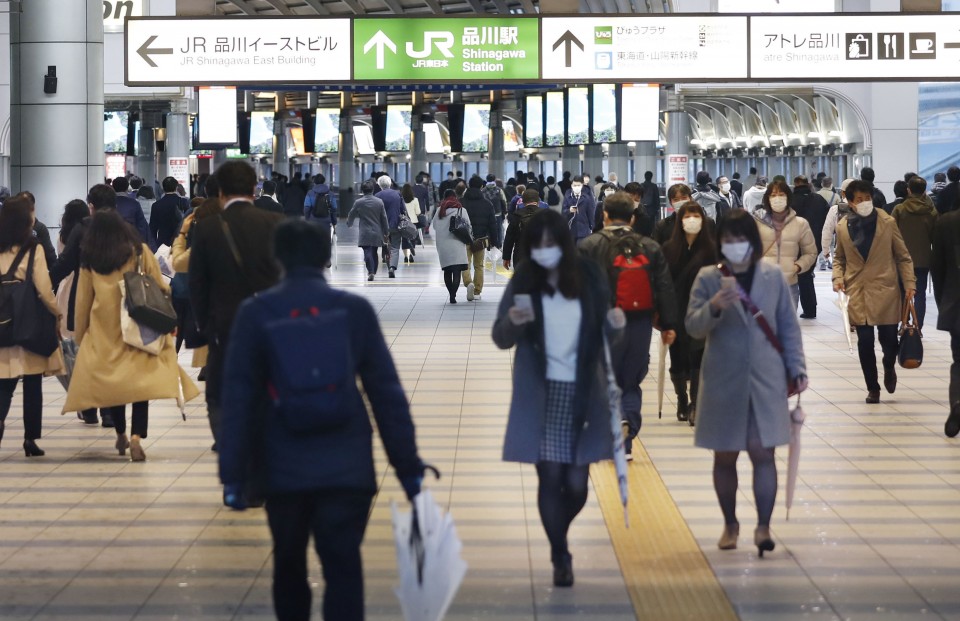 A growing number of companies are switching to teleworking amid the spread of the virus, although Japan Inc. has been slow to adopt the practice.

A set of fresh data gathered after the emergency declaration last Tuesday indicate reducing crowds on weekdays is more challenging than on weekends.

The number of commuter pass users marked a 50 percent year-on-year drop in a three-day period through Friday, while it fell 26 percent from a week ago, according to East Japan Railway Co.

A separate survey by Agoop Corp., a SoftBank Corp. subsidiary, showed crowds near five major train stations in the Japanese capital -- Shimbashi, Shinjuku, Shinagawa, Tokyo and Roppongi -- were down 60 to 80 percent on Sunday from last Tuesday, the day the state of emergency was declared.

"We need to examine the effect of the request for a 70 percent reduction," the top government spokesman said at a press conference.

The virus outbreak has prompted insurance companies to suspend their door-to-door selling of products amid fears of transmission via face-to-face interactions.

Starting Tuesday, about 53,000 Nippon Life Insurance Co. employees will work from home as the company will suspend sales visits temporarily. The workers will still receive part of their performance-based pay, the insurer said.

The governors of Osaka and Fukuoka, both put under the state of emergency, have decided to request that some businesses, including nightclubs, pachinko parlors and movie theaters, close from Tuesday till May 6. Tokyo has already made a similar request.

Ishikawa became the latest prefecture on Monday to declare its own state of emergency. Other prefectures that have done the same include Aichi in central Japan where Toyota Motor Corp. is headquartered.

Aichi, along with Kyoto, have been stepping up calls for the government to place the central and western Japanese prefectures under a state of emergency.

Sharp increases in coronavirus infections in urban areas have sounded the alarm among government officials and medical experts. Across Japan, the number of cases has topped 8,000, including about 700 from the Diamond Princess, a cruise ship that was quarantined in February near Tokyo.

Based on opinions of members of a panel tasked with the coronavirus response, the prime minister can declare a state of emergency for designated prefectures, allowing their governors to take stronger preventive steps.

Suga, the top government spokesman, said it is up to the government panel to decide whether the coverage of the current emergency declaration should be expanded. The seven designated prefectures are Tokyo, Chiba, Kanagawa, Saitama in the metropolitan area, Osaka and Hyogo in western Japan, and Fukuoka in southwestern Japan.

Opening of Ainu center in Hokkaido postponed amid virus crisis