More than 80 percent of the public believe the government should compensate businesses that have complied with a request to suspend operations in response to a surge in coronavirus infections in Tokyo and other parts of Japan, according to a Kyodo News survey released Monday.

In the four-day nationwide telephone survey through Monday, 80.4 percent of respondents said Prime Minister Shinzo Abe's declaration of a state of emergency last week in Tokyo, Osaka and five other prefectures came too late.

In reflection of such criticism, the public approval rating for Abe's Cabinet fell 5.1 percentage points from the previous survey in late March to 40.4 percent. The disapproval rate came to 43 percent, the first time it has surpassed the approval rate since mid-February.

According to the latest survey, 82 percent said the government should compensate businesses in exchange for a request to suspend operations to prevent a further spread of the pneumonia-causing virus, while 12.4 percent said they see no such a need.

Under the declaration effective through May 6, prefectural governors can request that businesses halt operations, although it is not legally binding.

While 80.4 percent were dissatisfied with the timing of Abe's declaration, only 16.3 percent said it was appropriate.

The survey showed 75.1 percent appreciate Abe's declaration and 20.8 percent do not appreciate it.

Asked whether they think the number of new coronavirus cases would fall during the monthlong state of emergency, only 26.5 percent said yes, while 68.9 percent said they do not think so. 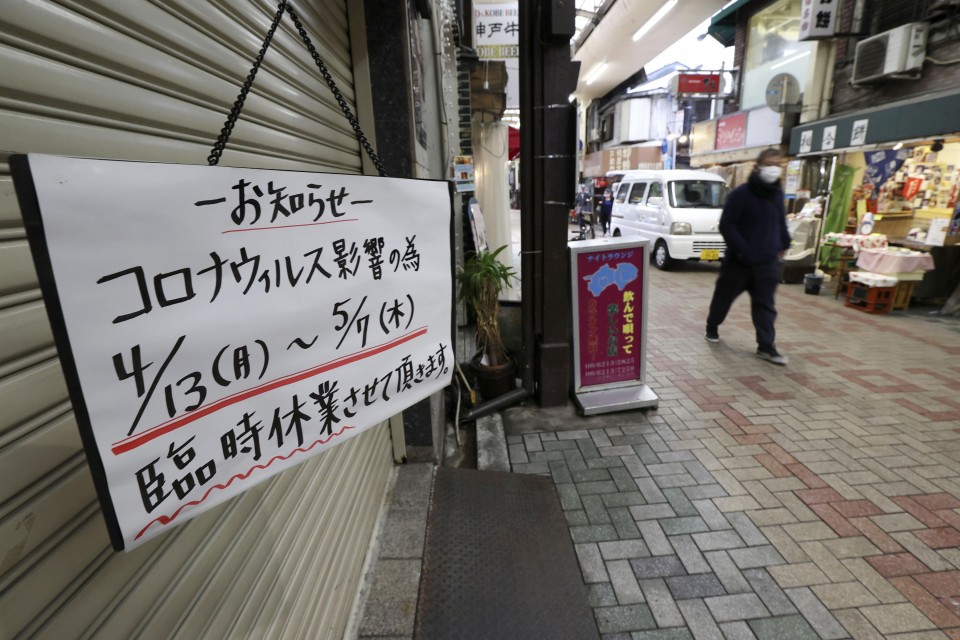 (A street in Osaka's Minami shopping district is quiet on April 13, 2020, as some businesses are asked to suspend operation for the time being to curb the spread of the new coronavirus.)

The survey additionally showed 76.2 percent do not appreciate the government's decision to send two cloth face masks to each of the roughly 50 million households in Japan, while 21.6 percent said they appreciate it.

The distribution, which will start later this month, has been ridiculed and criticized by citizens as a waste of taxpayer money, with many doubting its efficacy in preventing the spread of the virus.

Even some members of Abe's Liberal Democratic Party have raised questions about the distribution of what critics ridicule as "Abenomask" -- meaning "Abe's mask."

"At a time when the medical circle is suffering from a mask shortage, the government's way of communicating information was divorced from reality," former Defense Minister Gen Nakatani said.

The respondents were also critical of the government's plan to provide 300,000 yen ($2,800) to some households as part of efforts to cushion the economic impact of the virus, with only 20.4 percent saying the measure was appropriate and 10.7 percent believing the amount is not sufficient.

A total of 60.9 percent said the government should provide a uniform cash handout to each household.

The handout only applies to those whose income has fallen by more than half, or slipped to a level that would allow residential tax exemptions due to the outbreak of the virus.

"It is likely 80 percent of households will not be able to receive the handout," a former LDP executive said, requesting anonymity. "It would have been better to give a flat 100,000 yen to every person."

The survey also found the respondents are pessimistic about the government's largest-ever 108 trillion yen stimulus package, with 72.1 percent saying they do not expect much from it and 23.4 saying otherwise.

Support for the LDP fell 3.9 points from the March survey to 33.1 percent, although it was still far ahead of other contenders. The main opposition Constitutional Democratic Party of Japan came second at 7.7 percent.

Those who responded they do not support any party rose 2.5 points to 39.3 percent.

Former LDP Secretary General Shigeru Ishiba was tapped by 18 percent of respondents as most suitable to be the next prime minister, followed by Abe at 16.8 percent and Environment Minister Shinjiro Koizumi at 7.2 percent.

Participants in the survey were selected through random digital dialing, also known as RDD, in which telephone numbers are generated at random by a computer.

Of the 741 households with eligible voters dialed, 515 responded, while 513 of the 1,206 mobile numbers contacted gave responses.