A new coronavirus outbreak has weighed on the transportation and tourism sectors in Japan, including Shinkansen bullet trains, with fears about infection making people reluctant to venture outdoors or share confined spaces with others for long hours.

The number of passengers between Feb. 1 and 19 of the Tokaido Shinkansen Line connecting Tokyo and Osaka fell 8 percent from a year earlier, its operator Central Japan Railway Co. said, adding that of those who used other express trains plunged 15 percent.

The pace of decline was the almost same level as was in May 2011, when the nation's economy faced a downturn in the aftermath of the earthquake, tsunami and nuclear catastrophe that March in northeastern Japan.

On Thursday, Japanese Prime Minister Shinzo Abe abruptly asked all elementary, junior high and high schools in the country to close from Monday until the end of a spring break through early April.

Abe's government has also called on organizers of big sport and cultural events due to take place over the next two weeks to consider canceling or postponing them during what is seen as a critical time for Japan to stem a rise in new coronavirus infections. 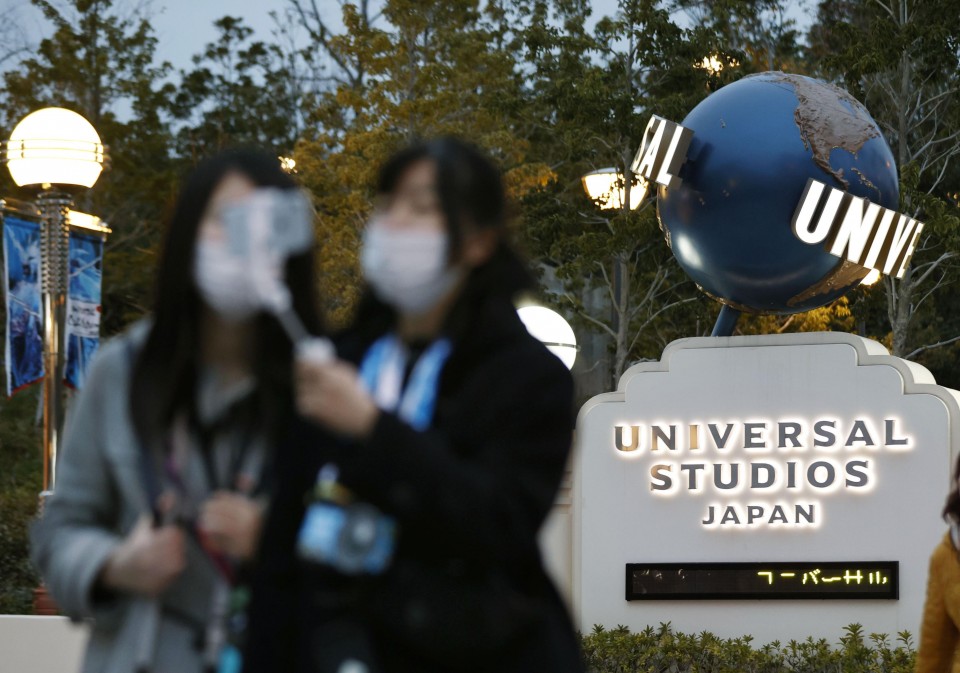 As many Japanese firms have started to urge their employees to work from home and minimize contact with others, the tourism and entertainment industries are set to suffer further losses, analysts say.

Revenues of department stores and hotels operated by the group companies of JR Central have decreased, especially as foreigners have become unwilling to visit Japan amid the spread of the virus that originated late last year in the central Chinese city of Wuhan.

"It is difficult to gauge the business outlook, given that it is uncertain when the virus outbreak will end," JR Central President Shin Kaneko said at a press conference late last week.

As for the airline field, Narita International Airport Corp. said Thursday that the number of passengers who left for China between Feb. 1 and 22 plummeted 66.5 percent from the previous year to 42,400.

Meanwhile, the new coronavirus, which causes the disease officially known as COVID-19, has dealt a crushing blow to the tourism sector across Japan, as all group travel from China to other nations have been banned since late last month.

Tokyo Shoko Research said Tuesday that a long-established hot spring inn in the central Japan prefecture of Aichi has been gone bankrupt, with cancelations from Chinese people worsening cash flow.

It marks the first business failure in Japan related to the virus spread, the credit research firm said.

According to Tokyo Shoko Research, around 70 percent of the 12,348 polled Japanese companies answered that the recent outbreak of the new coronavirus has already affected or is expected to affect their corporate activities down the road.

In 2019, the number of foreign visitors to Japan reached a record high of 31.88 million. By country and region, China led with 9.59 million visitors, up 14.5 percent from a year earlier.

A representative from the Hokkaido Bus Association said, "We've received cancellations not only from visitors from China, but also from Southeast Asia. With the trend of people avoiding crowds, the effects will likely drag on."

In a survey of its chartered-bus operator members, it found about 1,700 buses have been canceled for trips between January and March -- equivalent to a loss of 110 million yen ($1 million).

Hokkaido, Japan's northernmost main island that has a large number of ski resorts and scenic areas, is one of the most popular tourist destinations among wealthy Chinese.

Tokyo Disneyland and Tokyo DisneySea will close from Saturday to March 15, the operator of the theme parks said, adding the policy is in line with the government's request this week.

Land, Infrastructure, Transport and Tourism Minister Kazuyoshi Akaba said at a news conference on Friday that the Abe administration will step up measures to support companies stricken by the virus spread.

Japan's economy, the third biggest in the world, shrank an annualized real 6.3 percent in the October-December quarter, its sharpest slide in more than five years, against a backdrop of a 2-percentage-point consumption tax hike and a devastating typhoon.