Carlos Ghosn, the former chief of the Nissan-Renault auto alliance, said Tuesday he has arrived in Lebanon to escape "injustice and political persecution" in Japan where he was on bail facing trial for alleged financial wrongdoing.

"I am now in Lebanon and will no longer be held hostage by a rigged Japanese justice system," Ghosn said in a statement released by his U.S. representative. Ghosn was required to stay in Japan pending trial. 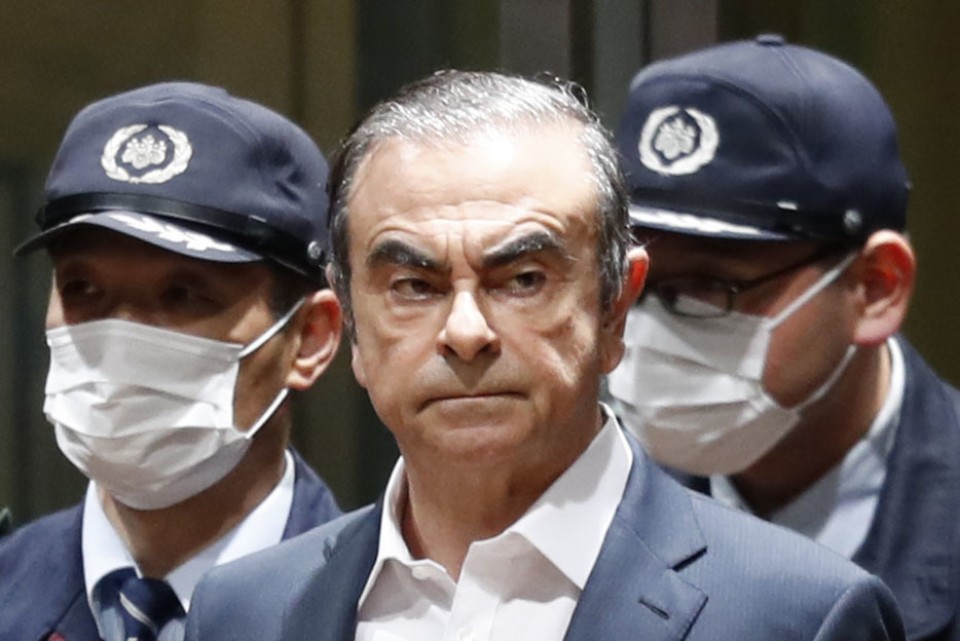 Ghosn, who holds Brazilian, French and Lebanese nationality, criticized the Japanese justice system, saying "guilt is presumed, discrimination is rampant, and basic human rights are denied" in the statement.

Ghosn's unexpected but successful escape apparently exposed the country's lax immigration controls. The Justice Ministry and other law enforcement authorities will investigate how Ghosn jumped his bail and departed from Japan.

The 65-year-old former Nissan boss is accused of underreporting his pay for years and misappropriating the company's funds, charges he denies. Ghosn's prolonged detention after his initial arrest in November 2018 drew international criticism, with some critics calling it "hostage justice" enabling authorities to hold alleged offenders in difficult conditions for long periods of time.

"I'm surprised and baffled" by the move, said Junichiro Hironaka, a member of Ghosn's defense counsel in Japan, adding, "I don't know anything more than what has been reported."

"If he actually left (Japan), it can be presumed as violating his bail conditions," Hironaka said.

Japan's immigration database shows no record of Ghosn's departure, sources close to the matter said, while the transport ministry's Kansai International Airport office said a private jet left the airport in Osaka Prefecture on Sunday for Istanbul even though it has no information about the plane's passengers. 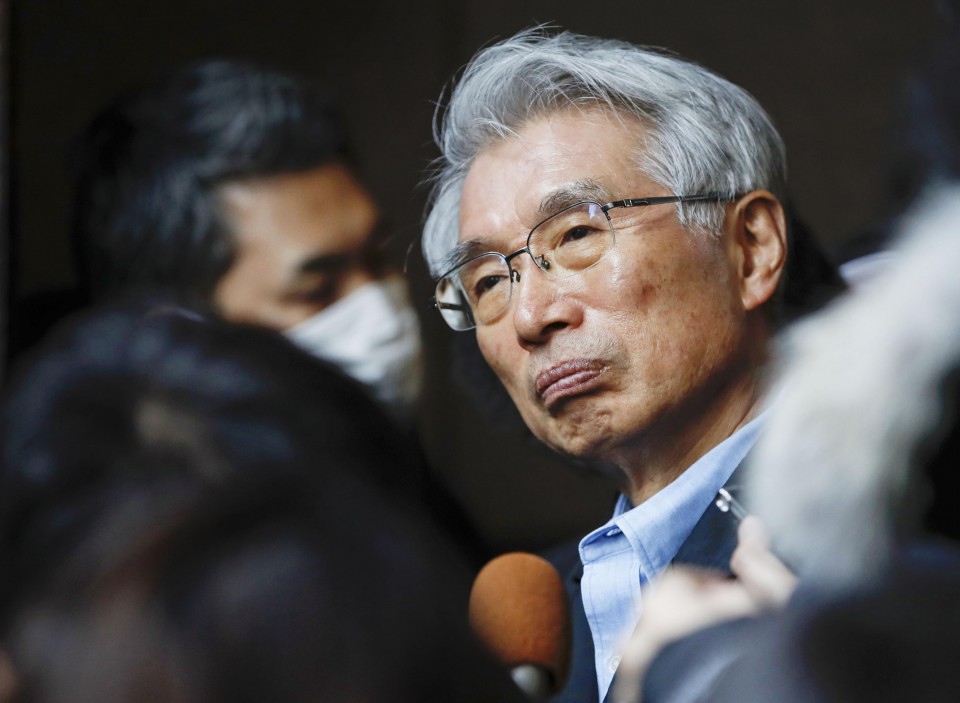 The Tokyo District Court said Tuesday the terms of his bail have remained unchanged, banning him from traveling abroad, and legal experts in Japan said he may have left the country without permission.

Lebanese television, MTV Lebanon, reported that Ghosn hid in a box designed for transporting a musical instrument and left on a plane from a regional airport, without citing sources of information. He got help from a security service company and was in possession of a French passport when he entered Lebanon via Turkey, it reported.

Under the conditions of his bail, Ghosn was not allowed to meet in Japan with his Lebanese wife without being granted special permission, though the court recently decided to allow him to talk with his wife via videoconference, sources close to the matter said last month.

He was released on 1 billion yen ($9 million) bail after nearly 100 days of detention. He was later served with a fresh arrest warrant and again released on 500 million yen bail.

Tokyo prosecutors' request for the revocation of Ghosn's bail was granted by the Tokyo court Tuesday night. The bail money is expected to be forfeited.

A senior official of the Japanese Foreign Ministry said Japan and Lebanon do not have an extradition treaty, meaning Ghosn cannot be handed over to Japan without Lebanon agreeing to it.

"It is not known at this moment if the Lebanese government will be cooperative," the official said.

Ghosn would not face trial, expected to begin around April, if Lebanon refused to hand him over, a different senior ministry official said.

Ghosn, who was born in Brazil and grew up in Lebanon, still has friends and family there, The Wall Street Journal reported.

Reporters gathered in front of a house belonging to Ghosn in Beirut, although there was no sign of anyone inside.

Former Nissan executive Greg Kelly, who was arrested together with Ghosn in November 2018 over alleged underreporting of Ghosn's remuneration and is now awaiting trial, said he did know about Ghosn leaving Japan, according to his lawyer.

Ricardo Karam, a television host and friend of Ghosn who has interviewed him several times, said in a Twitter post, "Whatever the tools were, Carlos Ghosn is back to freedom on New Year's Eve. Every human being deserves human rights and a chance to tell the truth out loudly."

Whatever the tools were, #carlos_ghosn is back to #freedom on #NewYear ‘s eve. Every human being deserves #HumanRights & a chance to tell the truth out loudly . Congrats to humanity ! #Japan #freedom #escapetofreedom pic.twitter.com/w1EnSobE2Y

Ghosn's defense team repeatedly criticized Japan's prosecution procedures, saying he was subjected to a host of questionable practices during more than 100 days of detention prior to his release on bail. His lawyers also said he was determined to fight all the allegations against him.

The former chief executive of Nissan and its French peer Renault SA is accused of underreporting his remuneration for the eight-year period through March 2018.

He is also accused of transferring a private derivatives contract that was incurring a loss of 1.85 billion yen ($17 million) to a Nissan account and paying $14.7 million in company funds to a Saudi businessman who extended credit to him.

In addition, Ghosn, also the former chairman of Mitsubishi Motors Corp., is charged with having a Nissan subsidiary in the United Arab Emirates pay a total of $10 million to a distributor in Oman, and having $5 million of that transferred to a savings account at a Lebanese investment firm that Ghosn effectively owns.

I am now in Lebanon and will no longer be held hostage by a rigged Japanese justice system where guilt is presumed, discrimination is rampant, and basic human rights are denied, in flagrant disregard of Japan's legal obligations under international law and treaties it is bound to uphold. I have not fled justice - I have escaped injustice and political persecution. I can now finally communicate freely with the media, and look forward to starting next week.

June 2001 -- Ghosn doubles as CEO and president of Nissan.

May 2009 -- Ghosn doubles as CEO and chairman of Renault.

Nov. 19, 2018 -- Ghosn is arrested by Tokyo prosecutors on suspicion of understating remuneration in Nissan's securities reports during five years through March 2015.

Dec. 10 -- Ghosn is indicted on charge of violating financial instruments law. He faces fresh arrest warrant over remuneration underreporting that is suspected to have continued through March 2018.

Jan. 11, 2019 -- Ghosn is charged with aggravated breach of trust and understating his remuneration for three years through March 2018. Ghosn's defense counsel requests his release on bail.

March 6 -- Ghosn is released from the Tokyo Detention House following 108 days in detention.

April 4 -- Tokyo prosecutors serve fourth arrest warrant on Ghosh over fresh allegation of aggravated breach of trust, this time related to misusing Nissan funds and causing it a loss.

April 9 -- Ghosn claims his innocence and "conspiracy" by Nissan executives behind his arrest in video footage released by his lawyers.

Dec. 31 -- Ghosn says he has left Japan and arrived in Lebanon in a statement dated Dec. 30.