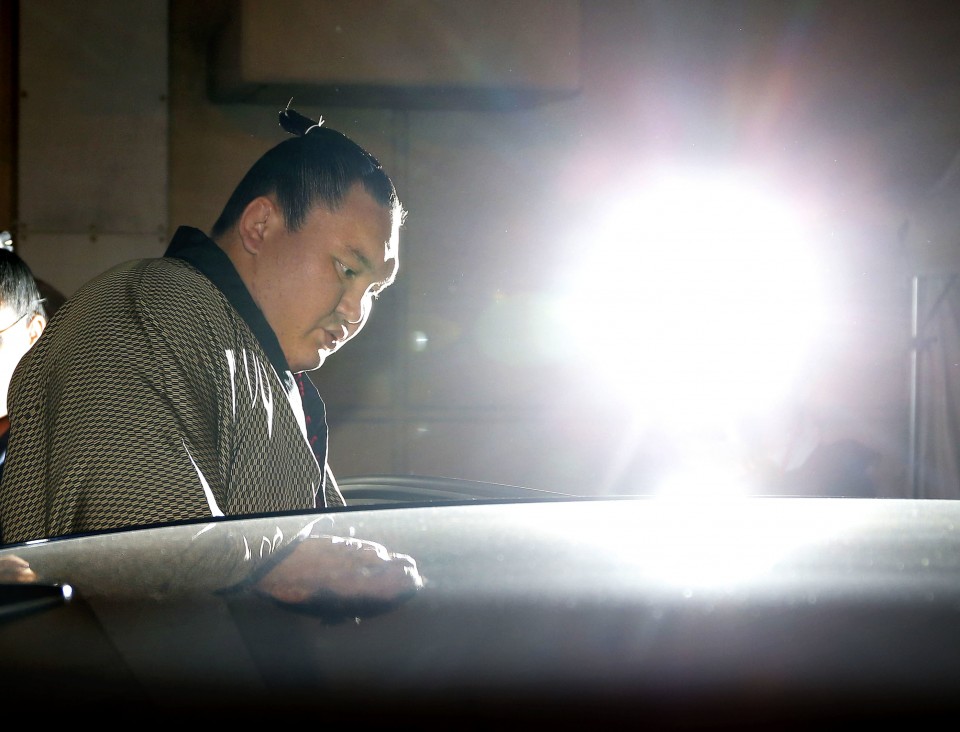 FUKUOKA - Hakuho took another step toward a record-extending 43rd top-level championship with victory over Ryuden at the Kyushu Grand Sumo Tournament on Wednesday.

The Mongolia-born grand champion maintained his outright lead, improving to 10-1 as he forced out the No. 5 maegashira in the final bout of Day 11 at Fukuoka Kokusai Center.

Eschewing his trademark face slap, Hakuho immediately took Ryuden's belt with his left hand and maneuvered him back toward the edge while securing a double outside grip. From there, Ryuden (4-7) was powerless to stop the all-time championship record holder from forcing him over the straw.

Komusubi Asanoyama remained Hakuho's closest rival at the 15-day tournament, improving to 9-2 against No. 3 Takarafuji (4-7).

The winner of the Summer Grand Tournament opened with a hard charge and maintained his momentum, easily shoving Takarafuji out despite being denied a belt hold.

The lone competing ozeki, Takakeisho, claimed a winning record and retained an outside chance for the title with an easy push-out victory over No. 5 Aoiyama.

The 23-year-old powerhouse improved to 8-3 as he quickly overwhelmed Bulgarian-born Aoiyama (5-6) with a pushing and thrusting attack.

Sekiwake Mitakeumi saw his hopes of an ozeki promotion take another hit following a force-out loss to komusubi Endo.

Mitakeumi (5-6) had the momentum in the initial collision but Endo (5-6) countered with a shallow grip, holding his ground before using his leverage to drive out the two-time tournament winner.

Okinoumi shoved Abi off balance at the jump, then knocked the komusubi down before he had a chance to launch his favored thrusting attack.

Komusubi Hokutofuji (4-7) moved to the brink of a losing record after dropping a hard-fought bought against No. 2 Myogiryu (5-6).

Hokutofuji went in straight and hard, knocking Myogiryu back to the edge, but the 33-year-old veteran kept his composure and resisted a second force out attempt before battling back to the center and thrusting the komusubi down.

"Being able to get a winning record in the final tournament of the year means I can end the year on a high note," the Tokitsukaze stable grappler said.

"Overall, I'm able to put a lot of pressure on my opponents and it will be good if I can keep it up. I want to go as far as I can in the championship race."

No. 13 Kagayaki (8-3) also captured an all-important eighth victory, pushing out No. 7 Tsurugisho (5-6) to ensure his first winning record in four tournaments.