Hakuho remained alone at the top of the leaderboard after beating Tamawashi at the Kyushu Grand Sumo Tournament on Sunday.

Having started the second week of the meet as outright leader, Hakuho made sure it stayed that way by forcing out the No. 4 maegashira in the final bout of Day 8 at Fukuoka Kokusai Center.

The sole competing grand champion continued his career dominance over his fellow Mongolian-born wrestler, who has won just one of their 17 top-level meetings.

Following a pair of false starts, Hakuho (7-1) opened with a hard face slap, then resisted a half-hearted throw attempt as he bundled out Tamawashi (4-4). 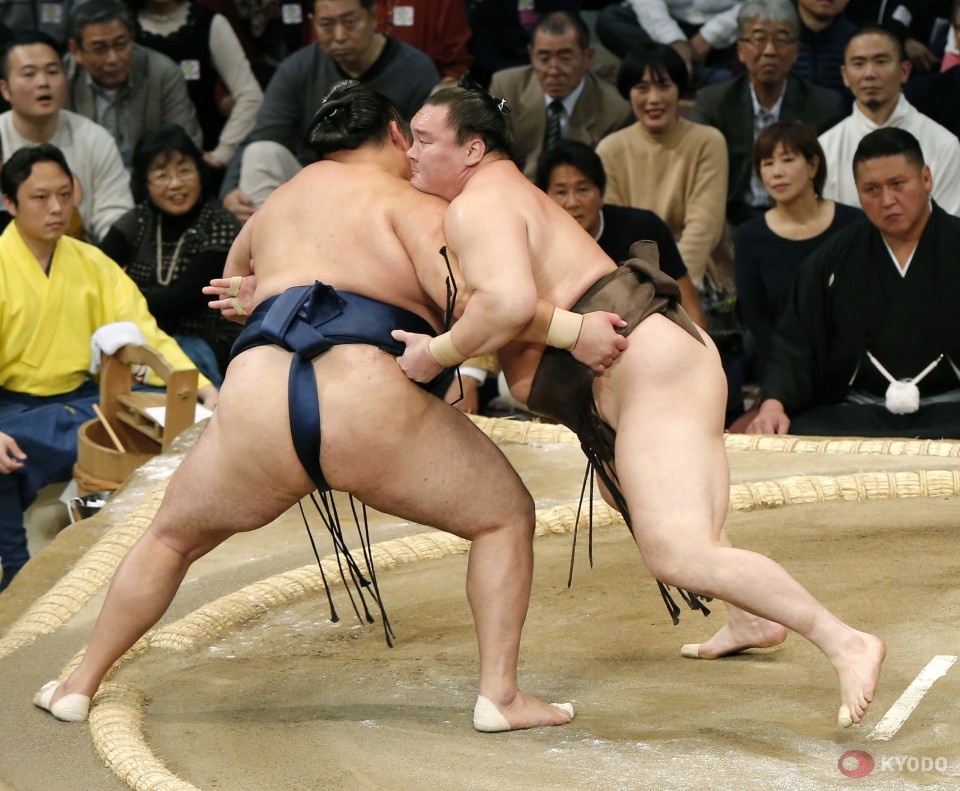 The ranks of elite wrestlers at the 15-day tournament thinned even further Sunday with the sudden withdrawal of ozeki Takayasu due to severe lower back pain.

The Tagonoura stable wrestler, who had taken part in the ring entry ceremony, dropped to 3-5 after forfeiting his bout against No. 3 Takarafuji (4-4).

The only ozeki in action, Takakeisho, had a convincing win by push-out against No. 4 Meisei.

The pair collided heavily at the jump, but Takakeisho (5-3) had the momentum and bundled Meisei (4-4) out with little fuss.

Struggling sekiwake Mitakeumi (4-4) continued clawing toward a respectable record by forcing out No. 5 Aoiyama (4-4).

The pair opened with an exchange of pushes and slaps, with Mitakeumi nearly losing his balance before driving his Bulgarian-born opponent over the straw.

The win was the second in a row following three straight losses for the Autumn Grand Tournament winner, who is laboring with a large gash above his right eye.

In a back-and-forth battle, Endo led with his left hand before finding Hokutofuji's belt with his right and driving him to the straw.

But Hokutofuji dug in and rallied back with a barrage of blows, almost slapping Endo down. Having survived the attack, Endo regained control and pushed his way to the win.

Asanoyama stayed one win behind Hakuho with a straightforward victory against Abi. Shrugging off a slapping attack at the opening, Asanoyama calmly collected the win with a quick frontal push-out.