The Mongolian-born yokozuna defeated No. 3 maegashira Takarafuji (3-4) to improve to 6-1 in the day's final bout at Fukuoka Kokusai Center.

Takarafuji fought aggressively from the initial clash -- when Hakuho lunged for a left-handed belt hold but came up empty. But despite his good fortune, Takarafuji was easily denied a belt hold of own. When he shifted his weight to try and gain one, Hakuho quickly slapped him down, and pumped his fist in celebration.

Hakuho, who holds the record for career grand tournament championships, is aiming to win his 43rd makuuchi title at a 15-day tournament that has been plagued by injuries to high-ranking wrestlers. Grand champion Kakuryu and ozeki Goeido are among those on the casualty list, which also includes three rank-and-file wrestlers. 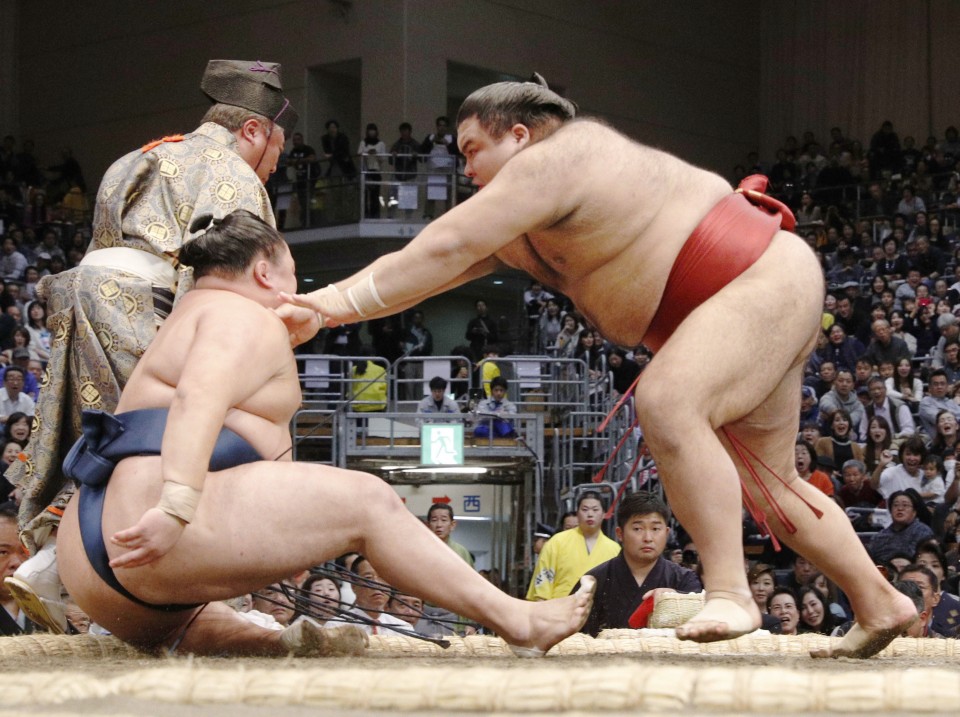 Five wrestlers, including komusubi Asanoyama and No. 8 Sadanoumi, remain one win behind Hakuho at the final grand championship of the year.

Ozeki Takakeisho and Takayasu fought persistently and bounced back from their Day 6 defeats.

In the day's penultimate bout, Takakeisho (4-3) beat No. 2 Myogiryu (3-4) as the fan-favorite continues his comeback after winning re-promotion to the sport's second-highest rank.

Takayasu (3-4) resisted shoves to his face from No. 4 Tamawashi (4-3), but was under pressure with his heels against the straw bales. The ozeki, however, unleashed a powerful push that caught Tamawashi flat-footed and sent the maegashira falling over backwards.

Takayasu, who earned promotion to the sport's second-highest rank in 2017, is currently fighting as a demotion-threatened "kadoban" ozeki, needing at least eight wins to maintain his rank at the January meet in Tokyo. 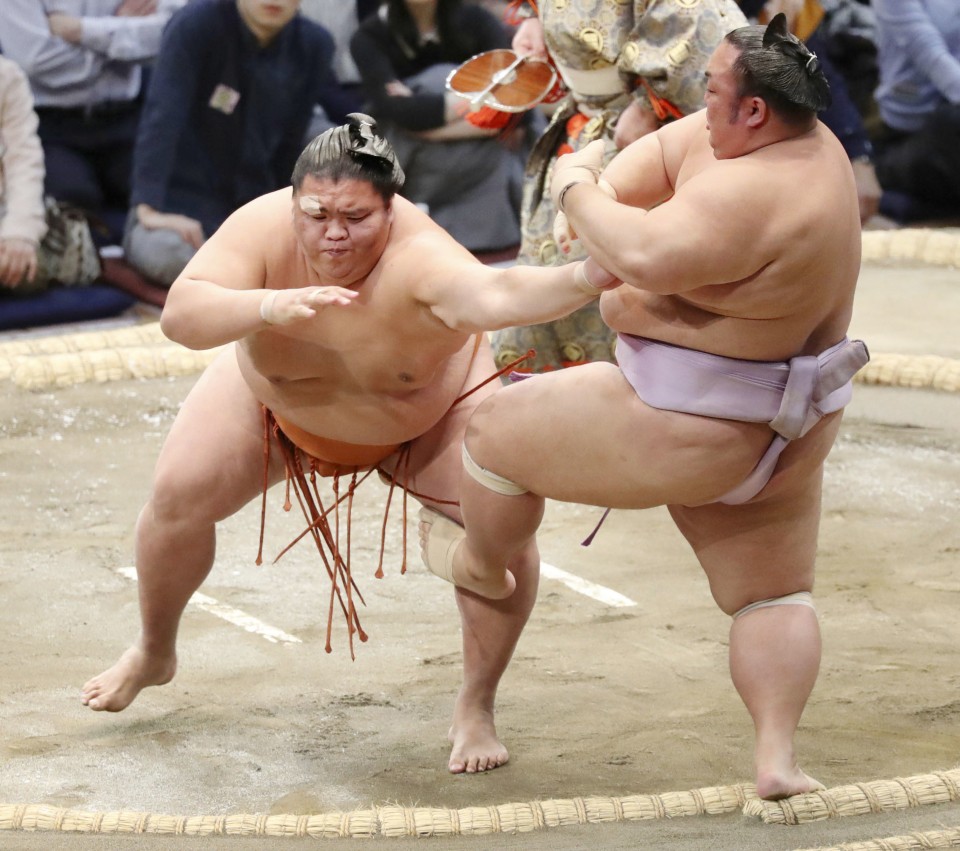 Sekiwake Mitakeumi (3-4) snapped his losing streak at three after dominating his bout against No. 4 Kotoyuki (3-4). While Mitakeumi started on the backfoot against the 181-kilogram maegashira, he bounced back and pushed him towards the edge before sending him off the ring.

While Mitakeumi came into the tournament eyeing his second-straight makuuchi-division championship and promotion to ozeki, those hopes were dashed after he suffered four losses in the opening six days.

Popular komusubi Endo (3-4) posted the quickest win of the day, pushing down No. 5 Ryuden (3-4) right after the initial clash to finish the bout in 0.7 seconds. 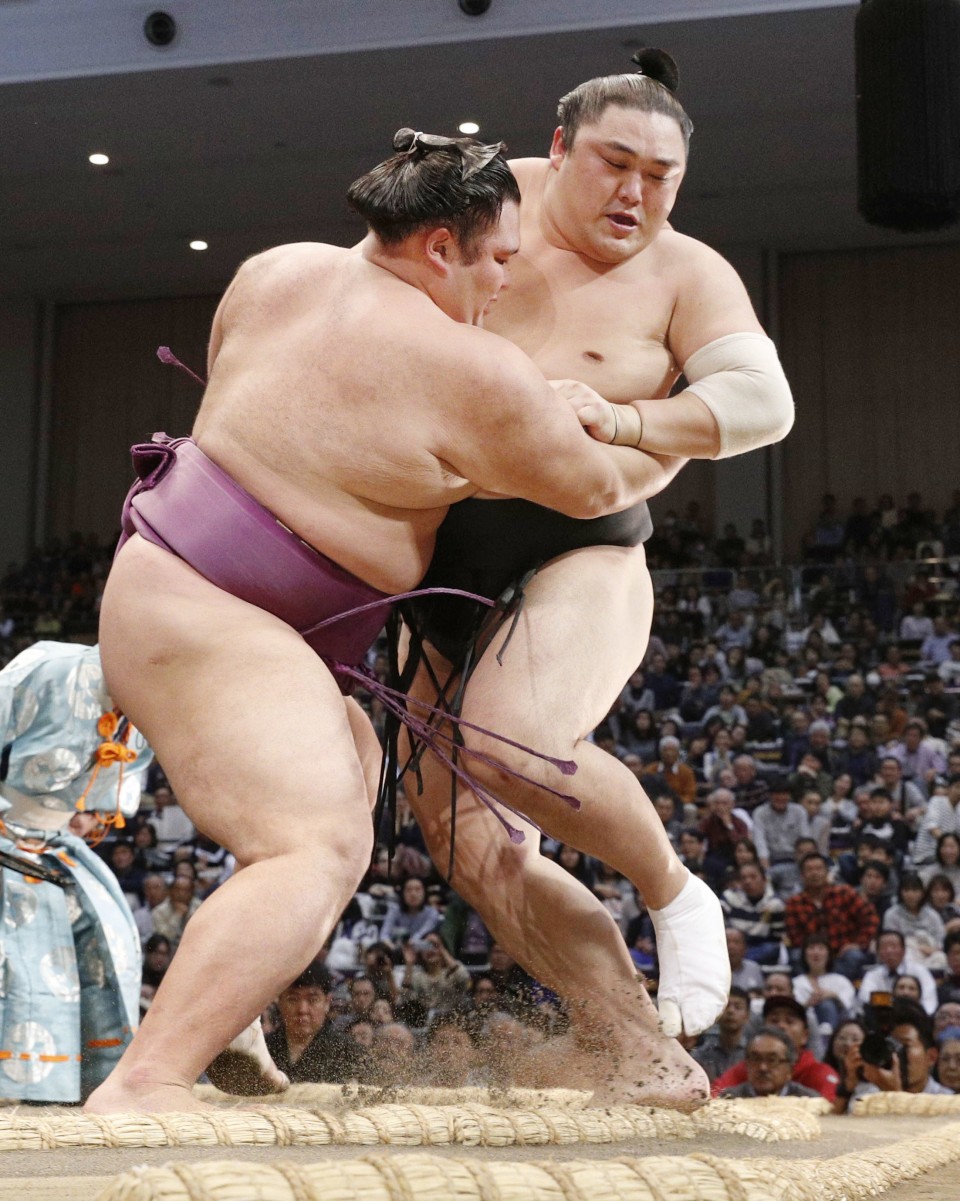 Among the wrestlers who started the day at 4-2, No. 8 Sadanoumi defeated No. 6 Enho (4-3) to improve to five wins. The Sakaigawa stable wrestler held Enho's belt with his right hand and threw his 98-kg opponent.

Sadanoumi is three wins away from achieving his third straight winning record, having posted an 8-7 record in September and a 9-6 mark in July.