Hometown favorite Kotoshogiku picked up his first win of the Kyushu Grand Sumo Tournament on Thursday, defeating previously unbeaten overnight leader Shodai and pulling him back to the pack on Day 5.

The No. 9 maegashira briefly turned back the clock to his ozeki days as he quickly shoved out his No. 10 opponent, leaving the title race wide open as injuries continue to thin out the ranks at Fukuoka Kokusai Center.

Sekiwake Tochinoshin and the other joint overnight leader, No. 16 Wakatakakage, both withdrew from the 15-day tournament earlier in the day, joining yokozuna Kakuryu, ozeki Goeido and No. 3 Tomokaze on the growing injury list.

All-time championship record-holder Hakuho (4-1) now headlines a group comprising mostly lower-ranked rikishi leading the race for the last Emperor's Cup of the year that includes Shodai, komusubi Asanoyama, No. 2 Meisei, and No. 6 Enho. 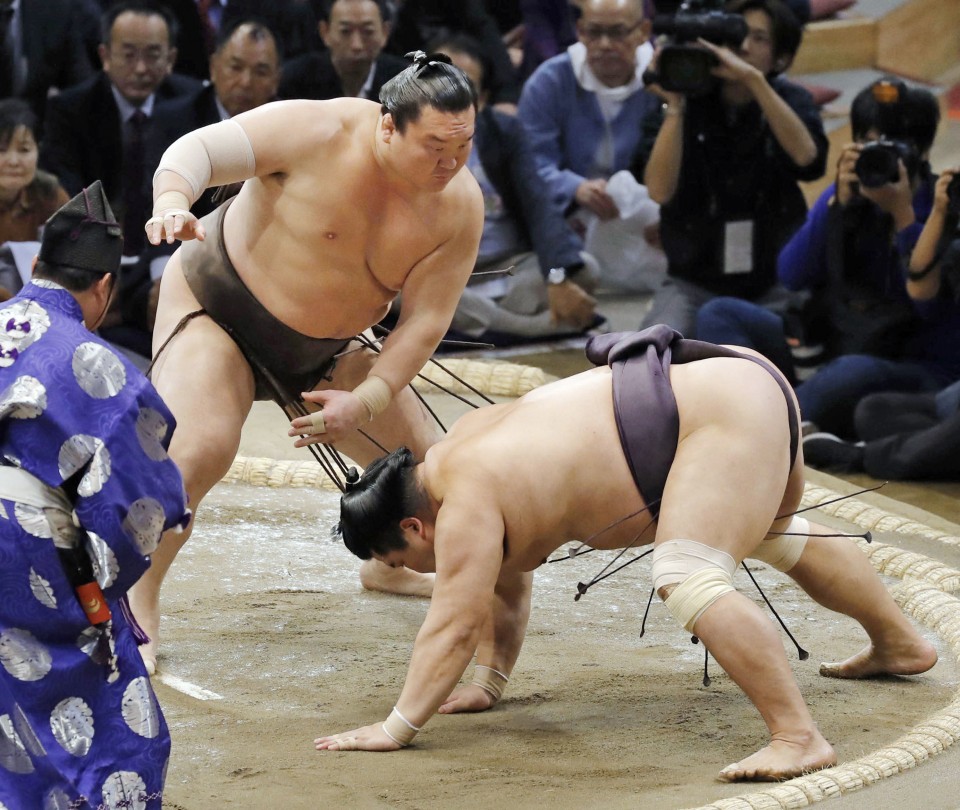 The Mongolian-born yokozuna pounced on No. 2 Myogiryu (2-3) to keep his prospects of winning his first makuuchi title as a Japanese citizen.

In other bouts, the upsets continued as ozeki Takakeisho (3-2) and Takayasu (2-3) again crashed down in Fukuoka.

Takakeisho tried to push out No. 3 Takarafuji (2-3), but was shoved aside and fell forward to the clay.

Takayasu (2-3) had Meisei (4-1) on the ropes for most of their lengthy bout, but was eventually pulled down as he tired out and struggled to keep his balance.

Mitakeumi (2-3) was defeated by No. 1 Okinoumi (2-3) and fell to his third loss. The sekiwake had Okinoumi in a headlock and tried to throw the maegashira down, but was turned around and driven out. 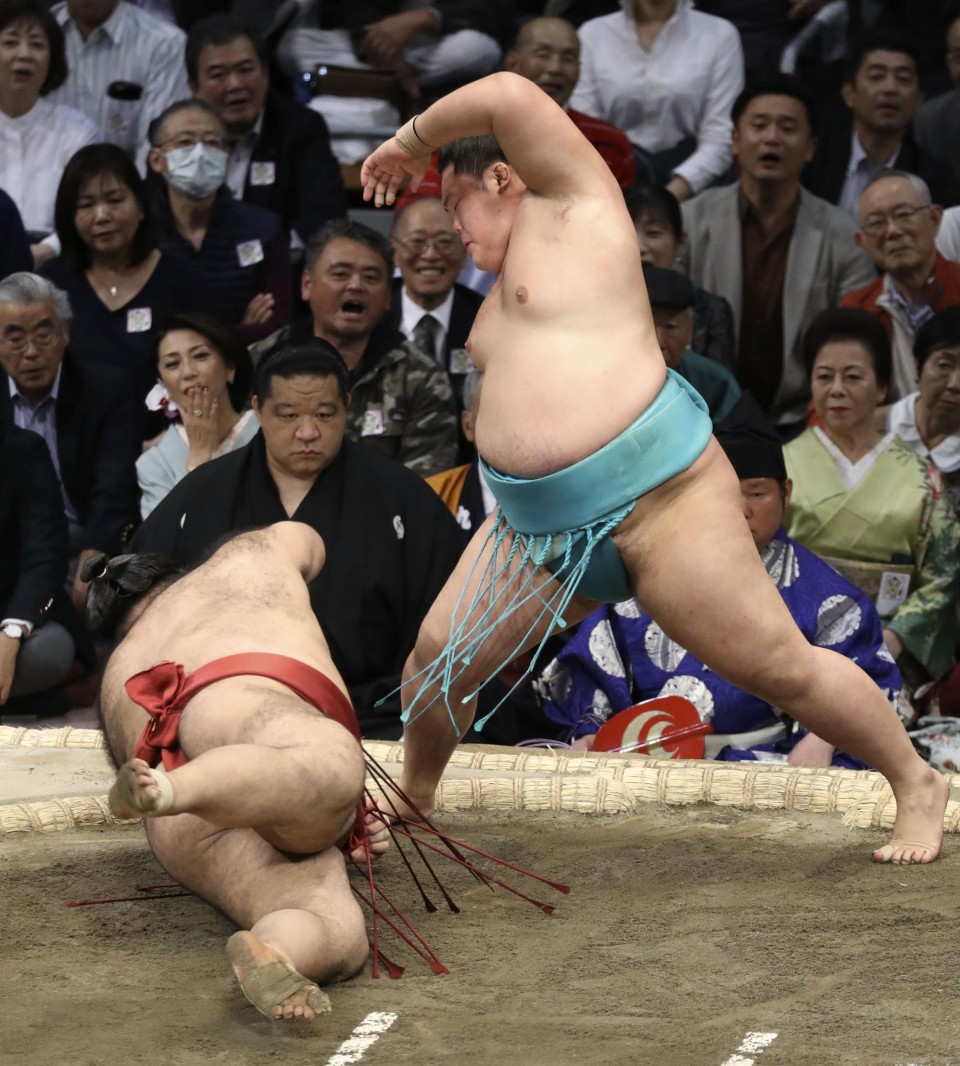 The komusubi-ranked wrestlers squared off against each other on Day 5, with Asanoyama (4-1) and Abi (2-3) emerging victorious with respective wins over Hokutofuji (3-2) and Endo (1-4).

Asanoyama blasted Hokutofuji with a hard initial hit and steamrolled him over the straw, while Abi drove out Endo with a thrusting attack.

Among the rank-and-file, Enho (4-1) downed No. 5 Aoiyama (3-2) to the crowd's delight. The top division's lightest wrestler snagged Aoiyama's arm and yanked him down, having held his ground against the Bulgarian who is more than twice his weight. 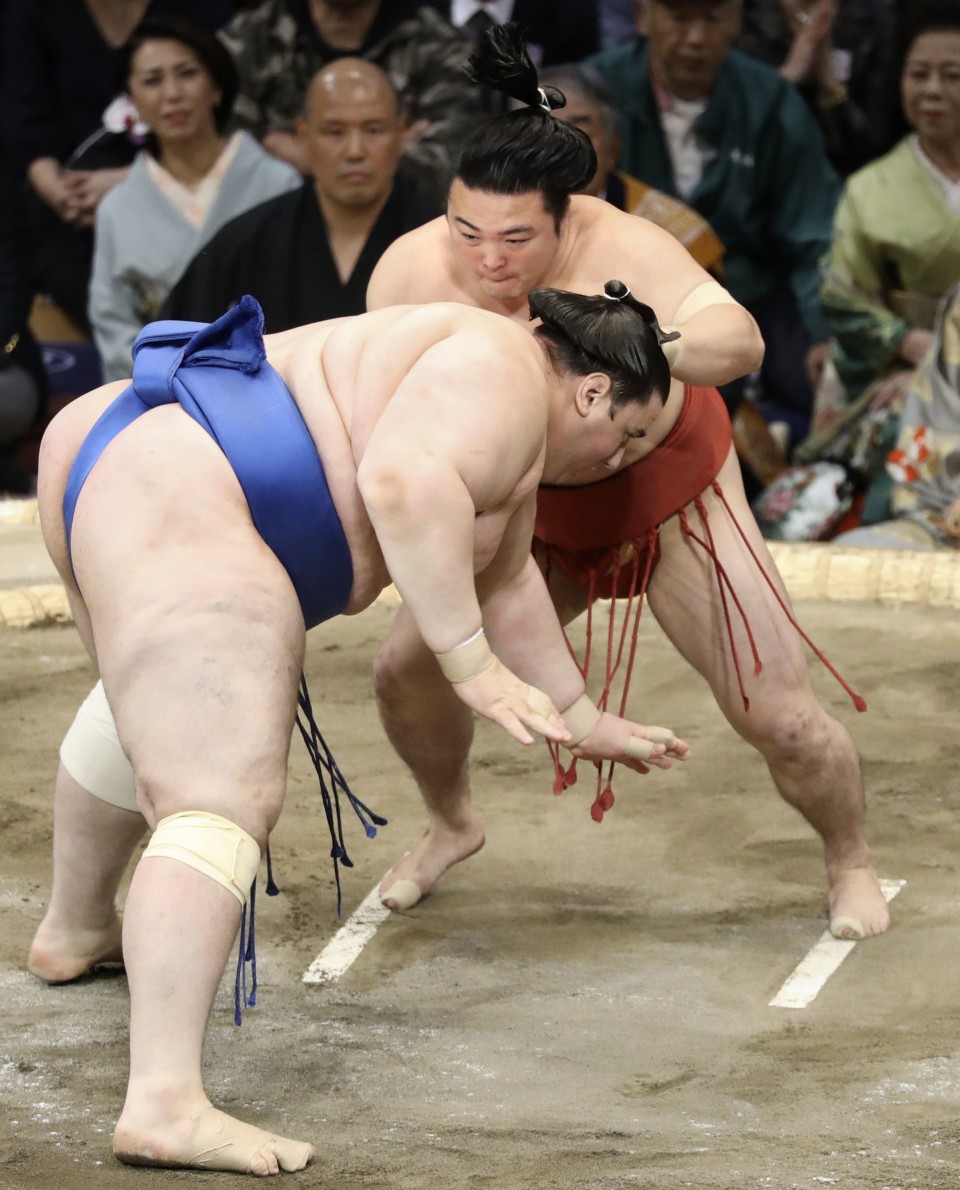 Earlier Thursday, Tochinoshin (2-3) pulled out with a right rib cartilage fracture sustained in his Day 4 bout against Takarafuji.

The injury-plagued Georgian, who won the 2018 New Year meet in an impressive comeback, will likely miss his chance to reclaim sumo's second-highest rank, needing at least 10 wins over the 15-day meet in Fukuoka to secure an automatic return to ozeki.

Wakatakakage, who emerged as an early leader following a batch of injuries and upsets over the first two days of action, forfeited his Day 5 bout with No. 13 Kagayaki (3-2) and saw his perfect top-division debut come to an unfortunate end.

The 24-year-old makuuchi rookie dislocated a joint in his right foot when he landed awkwardly off the dohyo while pushing out No. 14 Terutsuyoshi (2-3).