Grand champion Hakuho retained a one-win buffer at the Kyushu Grand Sumo Tournament after beating No. 4 maegashira Kotoyuki on Monday.

Targeting a record-extending 43rd makuuchi title at Fukuoka Kokusai Center, Hakuho (8-1) delivered a hard left-handed slap to Kotoyuki (4-5), then darted to the side while pulling the rank-and-filer down in the final bout on Day 9. 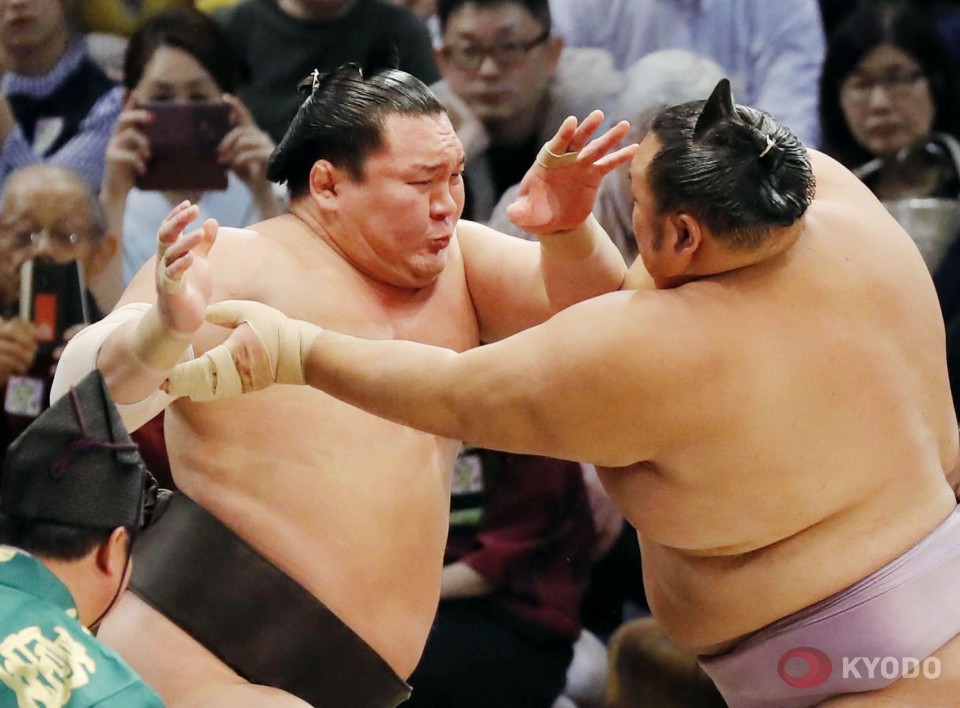 New komusubi Asanoyama and No. 13 Kagayaki remain one win behind the yokozuna, while five wrestlers sit two wins off the pace in the clash for the last Emperor's Cup of the year.

Asanoyama (7-2) ended a seven-bout losing streak against No. 1 Daieisho (5-4) to stay in contention. The komusubi rebuffed a hard charge from Daieisho and kept his opponent upright before switching gears and slapping him down.

Kagayaki (7-2) won his fifth straight bout by pushing out No. 10 Shimanoumi (3-6). After his initial charge was repelled, Kagayaki emptied the tanks and drove his fellow rank-and-filer over the straw.

In the penultimate bout of Day 9, ozeki Takakeisho (6-3) powered through a nose bleed to beat komusubi Hokutofuji (4-5). Having absorbed an inadvertent head butt in the day's most brutal match, Takakeisho stepped to the side and slapped Hokutofuji off the dohyo.

Takakeisho is the last ozeki standing in Fukuoka after Takayasu suddenly withdrew from the tournament on Day 8, despite having already taken part in the ring-entry ceremony, due to severe lower back pain.

Takayasu's Tagonoura stablemaster confirmed prior to top-division bouts Monday that the "kadoban" ozeki will not return to the 15-day meet and therefore faces a demotion for posting two consecutive losing records. 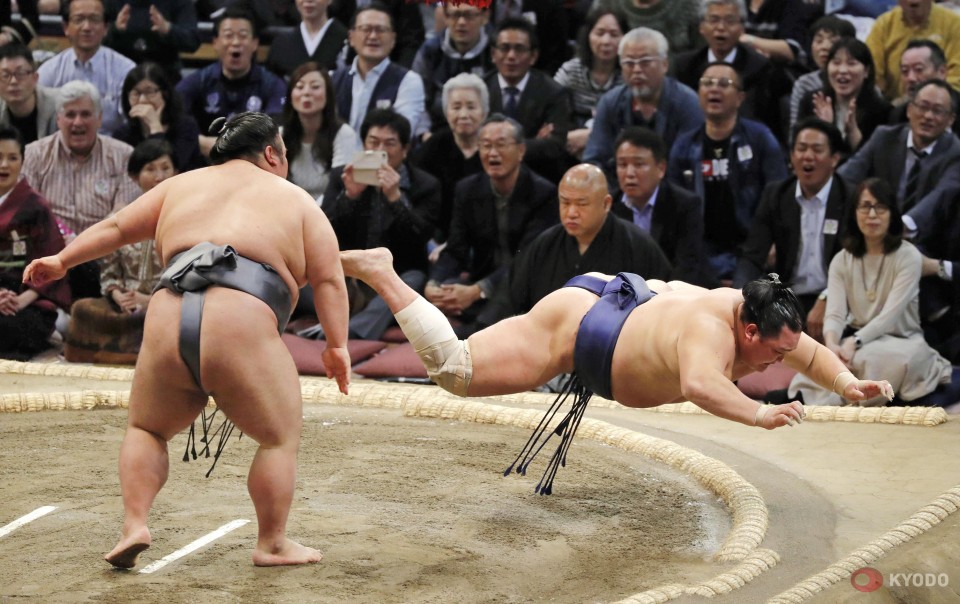 "The lower back is an important part (of the body), so we decided to sit out this tournament and prioritize treatment," Tagonoura said. "I want him to recover well and work hard at the next basho."

Takayasu can earn an automatic return to sumo's second-highest rank if wins at least 10 bouts at the New Year tour in January.

This tournament has already seen injury withdrawals from yokozuna Kakuryu, ozeki Goeido and sekiwake Tochinoshin, who missed his shot to regain ozeki status after pulling out with a rib injury on Day 5.

In other bouts Monday, sekiwake Mitakeumi (5-4) dominated No. 4 Tamawashi (4-5) to claim his 20th win against the Mongolian in 22 top-tier match-ups. September's champion paid no heed to the wound above his right eye, using his entire body to force Tamawashi out.

Endo dug in with his favored hold and nearly pushed Okinoumi out, but the top-ranked maegashira stood his ground and downed the komusubi with an overarm throw.

Fans were split over a match-up between local favorite, No. 6 Kotoshogiku (2-7), and No. 6 Enho (5-4) which saw the popular lightweight outmaneuver the former ozeki with his crowd-pleasing speed and technique.

Kotoshogiku withstood Enho's aggressive initial attack that drove him to the edge, but Enho kept him on the defensive and pulled Kotoshogiku out by the arm.